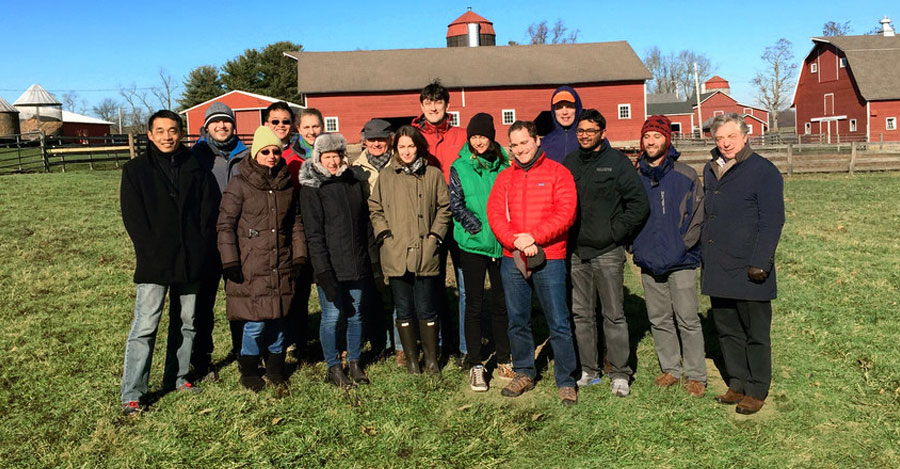 The shoes on your feet and the food on your plate might someday trace their origins not to a cattle ranch out west, but to a start-up company in Brooklyn. Modern Meadow, a biotech firm that’s trying to redefine how the world makes animal products, recently took up residence in BioBAT, a nonprofit technology facility operated by SUNY Downstate Medical Center and the New York Economic Development Corporation.

Founded in 2011 with an academic team formerly of the University of Missouri, Modern Meadow moved from Columbia, Mo. to Brooklyn in June 2014. The company uses tissue engineering to create “cultured” animal products—made without the need to raise, feed or slaughter animals.

The goal is to meet a soaring demand for those products without increasing the tremendous strain that animal agriculture puts on the environment.

Modern Meadow moved from Missouri because it needed more space and executives wanted to be closer to potential business partners, says Sclarsic. “For materials, that means the fashion and design communities. And, of course, New York is a global center for those industries.”

The leadership chose BioBAT in part because that facility is in a tax-free zone designated by New York State’s START-UP NY incentive program.

BioBAT also offered superior lab space that Modern Meadow could move into right away, Sclarsic says. The building that houses the facility, the Brooklyn Army Terminal, held other attractions as well. “It was built for industrial use, with piping, very strong floors, large rooms and great freight elevators,” she says. And trucks that come and go from the neighborhood don’t face the inner-city traffic snarls that are all too common in Manhattan. These features will benefit Modern Meadow as it moves from research and development into commercial production.

The company could also gain valuable assistance from experts and facilities at Downstate Medical. “We’re just starting to figure out how we can make a fantastic, mutually beneficial research relationship,” Sclarsic says. Already, the company has taken advantage of the school’s confocal microscopy equipment, she says. Modern Meadow also has done some work with HistoWiz, a histopathology service firm in Downstate’s Advanced Biotechnology Incubator.

Collaborations with SUNY could extend beyond the scientific. When executives from Modern Meadow first came to town to check out BioBAT, the SUNY Research Foundation introduced them to several people from the Fashion Institute of Technology (FIT), says Eva Cramer, distinguished service professor of cell biology at Downstate Medical Center and president of BioBAT, Inc.

“It’s certainly possible that we might work with FIT in the future,” says Sclarsic. “We are making groundbreaking new materials, and of course we want to do that with the input and collaboration of the fashion and design communities.”

Modern Meadow is still settling in and augmenting its network of relationships. “They’re incredibly sought after and busy, making huge numbers of contacts all over the world,” Cramer says.

Once it puts down roots, Modern Meadow—like other startups in BioBAT and the incubator—could provide some significant benefits to Downstate Medical Center. “There could be internships for both PhD and MD/PhD students, and opportunities to learn how to conduct an entrepreneurial business,” Cramer says. Modern Meadow’s executives could share their expertise with faculty and students who want to launch businesses, perhaps serving as mentors or giving lectures, she says.

They could also, if they wish, offer summer internships to biology majors from Hunter College, City University of New York, through a workforce development program at Downstate Medical Center. Several other startups in BioBAT and the incubator have hosted undergraduate interns; some have hired those students upon graduation.

Beyond the potential for collaboration, Cramer says, the mere presence of Modern Meadow could generate a creative buzz in the area around the Downstate Medical campus. Because they are such an exciting and interesting company, they provide inspiration and stimulate people to become entrepreneurs.