Today Begins the Journey of a Lifetime: SUNY Alum Scott Kelly’s One Year Mission in Space 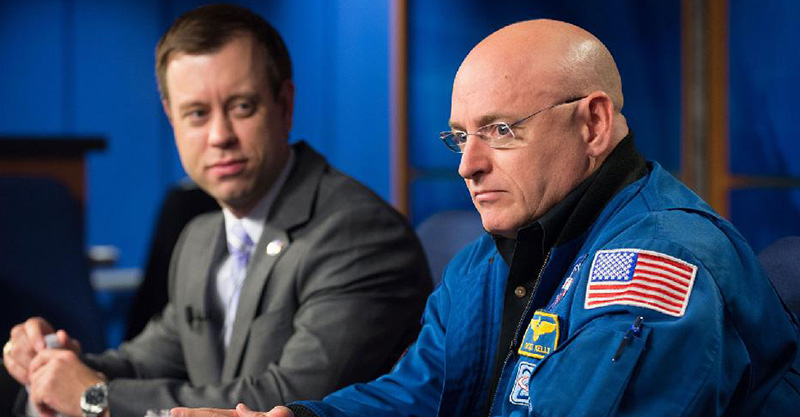 Today, NASA astronaut, Scott Kelly, SUNY Maritime ’87, along with two Soviet cosmonauts, will launch into space from a facility in a remote section of the Republic of Kazakhstan in central Asia. Kelly will spend the next year living and working aboard the International Space Station (ISS), the longest manned space trip to this date.

While living aboard the ISS, Kelly and his identical twin brother, Mark, a retired astronaut who will remain at home in Arizona, will be studied and compared against the other to determine the effects of extended living in space. NASA will monitor the twin astronauts, comparing any genetic differences between them, as part of a series of selected investigations to be conducted throughout the year-long mission.

“These investigations will provide broader insight into the subtle effects and changes that may occur in spaceflight as compared to Earth by studying two individuals who have the same genetics, but are in different environments for one year,” says NASA on its website.

Examples of the investigations to be conducted include: Human Physiology — how the spaceflight environment may induce changes in different organs like the heart, muscles or brain.; Behavioral Health – the effects spaceflight may have on perception and reasoning, decision making, and alertness; and Molecular/Omics — how stressors like radiation, confinement and microgravity prompt changes in biological samples like blood, saliva, and urine. 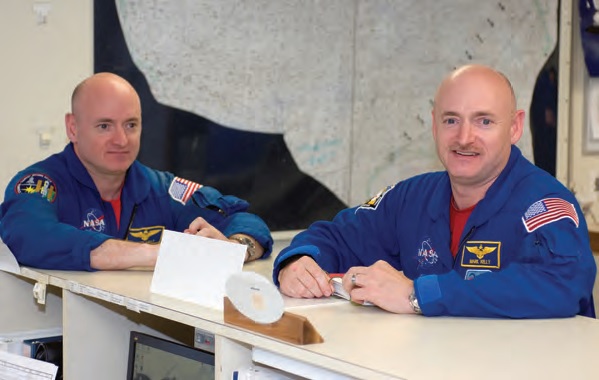 Scott Kelly’s “twin mission” along with his brother Mark certainly puts an entirely new spin on an old NASA program named, “gemini.”Navigator spoke with Captain Kelly in January about his upcoming mission, how his education and training at Maritime College helped prepare him for the mission, and what it means to today’s students. Kelly spoke about how the young man, originally from West Orange, New Jersey, and who graduated from Maritime College 28 years ago this May, was able to fly into space several times, and who now finds himself the focus of a year-long scientific study that has the potential to affect future space travel, including a mission to Mars.

“I went to Maritime to be a member of the Navy ROTC there. After my graduation, I became a Navy F-14 pilot and then a test pilot. Later, I applied to be an astronaut. Through a combination of hard work, being prepared, a little luck, and timing, it allowed me to get accepted into the astronaut program in 1996.

“Then, after my three previous flights, this one-year mission came up. There were a bunch of us eligible to be assigned to it. There were several other contributing factors, but ultimately I was the person selected for it.When asked if becoming an astronaut was something that he thought much about while he was a cadet at Maritime College, Kelly responded with a funny story dating back to his earliest days on campus.

“My roommate, Bob Kelman, with whom I’m still friends, tells a story about how when we met the first day of MUgsummer, he asked me what I wanted to do when I got out of there (Maritime College). I replied, ‘I want to be an astronaut.’ He laughed at me. It was kind of a smart aleck remark,” Kelly recalls. “I don’t remember saying that, but that’s what he (Kelman) says. He swears by it.” 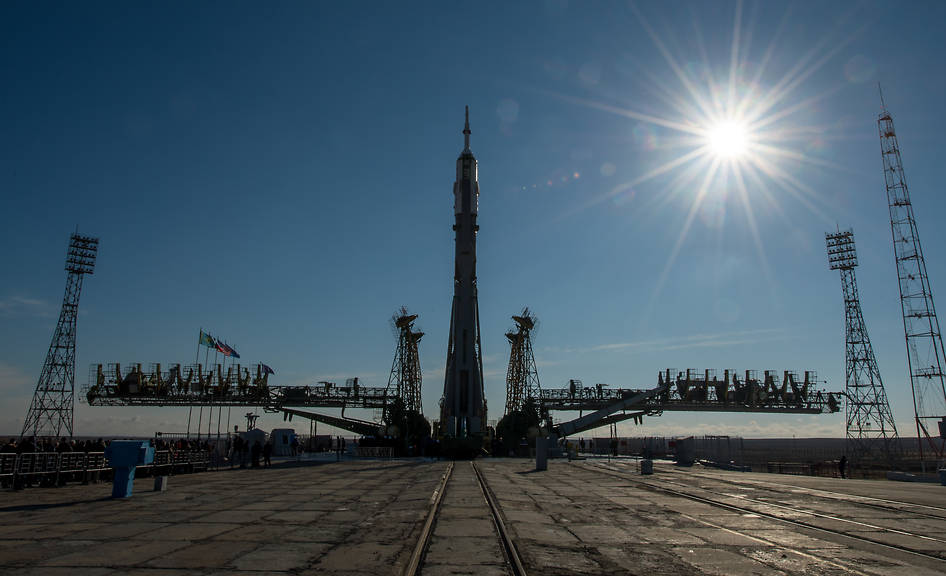 The Soyuz TMA-16M spacecraft is seen after having rolled out by train to the launch pad at the Baikonur Cosmodrome, Kazakhstan, Wednesday, March 25, 2015. It is scheduled to launch to the International Space Station from Kazakhstan on March 28, Kazakh time (March 27 Eastern time.) Photo Credit (NASA/Bill Ingalls)

But Kelly acknowledged that becoming an astronaut was, indeed, something that had crossed his mind.

“Being an astronaut certainly was something I was interested in doing back then. But at the same time it was a rather lofty goal. But if you don’t have lofty goals you often don’t go anywhere in life.”

Captain Kelly is very appreciative of his education from Maritime, particularly his time within the Regiment of Cadets and summers aboard the training ship, and the advantages it afforded him in his career endeavors.

“I thought going to school at Maritime College gave me somewhat of a critical advantage that some people who went to the Naval Academy didn’t have. At Maritime we learned to work in a very operationally-oriented environment. You are working in a stressful environment that has real implications for the safety of yourself, your crew mates, and the vessel. Operating the training ship during the summer cruises, it gave us a higher level of responsibility. Then, when they get into the military, as was my case, and flying airplanes, I already had experienced operational work situations that the others didn’t have.

“Now granted, it’s on a much different level of what I currently am working with, but it certainly was a good stepping stone to being in the Navy and learning how to fly airplanes. There are good parallels there.”

When asked what a current student at the College might take away from his year-long NASA mission, Kelly responded that while the “twin mission” might not have any direct correlation to what a Maritime student is studying in the classroom, it might inspire them to work hard to be a successful scientist or engineer someday, perhaps as an operational member of the U.S. military.

“Like a lot of people who have been successful in their careers, it is somewhat of a step-by-step process. Assuming you are performing well, doing your best, and you have the opportunity, you can be successful.”

From all of us at SUNY and across the world, good luck Scott!

Just awoke from pre-launch nap. Last time in bed for a year. Tomorrow it will be like this #ISS http://t.co/N63E0RFzTS