A Tale of Two SUNYs: Alumni Find Success in Film Industry Together 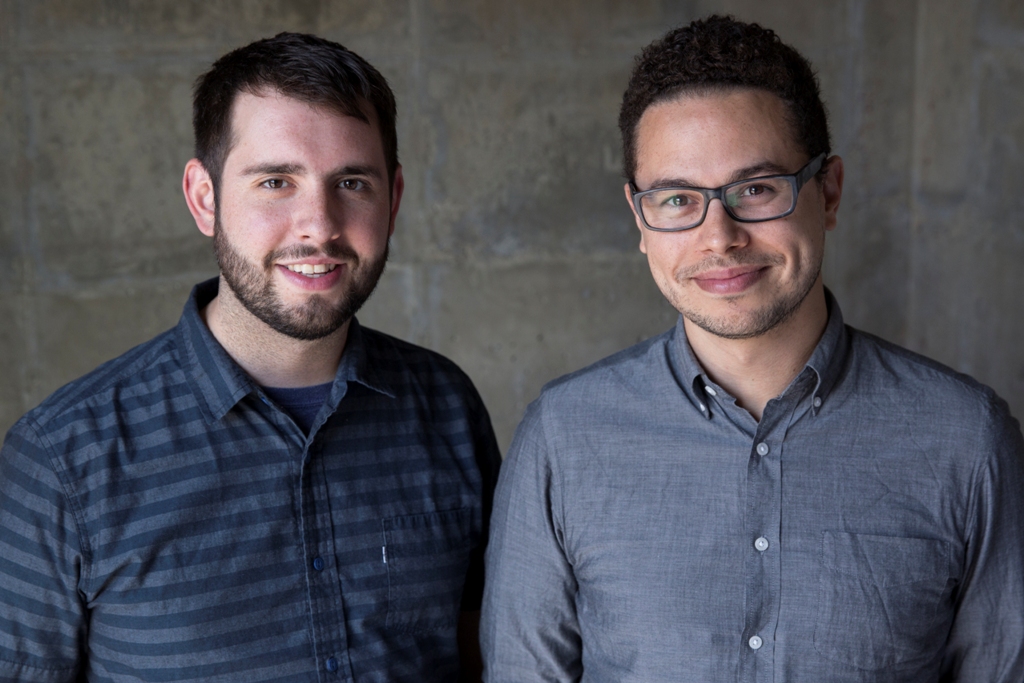 Meet Sean Gallagher and Sean Weiner, two SUNY grads who work at the Jacob Burns Film Center (JBFC) in Pleasantville, NY. They seem to have a lot in common; they share the same first name, they both graduated from SUNY schools, and they work for the same organization in the film industry. However, their unique SUNY stories – both equally interesting and rewarding – could not be any more different.

Growing up in Rhode Island, Sean Weiner was always interested in visual and performing arts. As a high school student he was very theater-minded and spent much of his free time performing in plays. His interest in film began his freshman year at SUNY Purchase, when he had the opportunity to take an upper-level Cinematic Expression course. “It was one of the first times I had been asked to skip ahead in something academically,” Weiner recalls. He decided to major in Cinema Studies with a minor in Art History and spent the next four years experimenting with the technique and tools of filmmaking while learning as much as he could from more experienced filmmakers. “I began hounding graduate students at NYU’s TISCH to help out on their thesis films in any way possible. Before I knew it I was PA’ing, driving vans, gripping, booming, and even gaffing on these sets.”

“I spent so much time in a screening room in the library running through every film from the French New Wave,” Weiner continues, “Or fumbling in the cold with a cruddy camera I was just barely beginning to understand. That really is the experience that influenced me the most – the ability to focus on my interests and follow my curiosity.”

After graduating from SUNY Purchase in 2005, Weiner accepted a position as a House Manager at the Jacob Burns Film Center – a customer service job that gave him the opportunity to interact with other people passionate about film, and eventually provided a stepping stone to his current position. However, Weiner’s path from graduation to successful career wasn’t easy. “I’ve only recently – nearly 10 years later – found myself in a place where I consistently get paid for my creative work,” he says. “You really have to pay it forward.” Since graduating, Weiner has moved to Japan to teach English, been an equipment manager, become faculty at the JBFC, become adjunct faculty at SUNY Purchase, made a feature film that screened at various film festivals, completed an MFA program in Integrated Media Arts at Hunter College, and joined a house team at Upright Citizens Brigade as a co-director and co-DP. “I’ve tried to take on every opportunity that came my way,” says Weiner.

Today, Weiner remains Senior Faculty and Curriculum Developer at the JBFC while pursuing professional and personal projects as a director in his free time.  As a lead creative in Private Cabin Collective, he made his first feature film, the improvisational We Are Strangers, which premiered as part of NewFilmmakers NY in spring of 2014. He is a director on the Upright Citizens Brigade’s Web Series team, Brinkman, which specializes in comedic narratives where the dumb meets the dark. He also teaches film directing in the School of Film and Media Studies at SUNY Purchase – the same program that he was once a student in. “As someone working in production right now, I can transfer knowledge and experience to the next generation of makers,” Weiner says. “There’s no more fulfilling work than helping another person learn, grow, and succeed.”

Sean Gallagher was always focused on video production, choosing to major in Mass Communication at SUNY Oneonta. However, he didn’t develop an interest in documentary filmmaking until his senior year of college. “Oneonta was offering its first ever documentary studies class and I was one of the first dozen students to register for the program,” Gallagher recalls. “It made me realize that not only was documentary a powerful tool for storytelling, but also a form of activism for social justice.” In fact, Gallagher developed his first feature-length documentary, Brothers of the Black List, in that class, which premiered at the 2014 Dallas International Film Festival – nearly seven years later!

Outside of class, Gallagher was a member of the SUNY Oneonta Poetry Slam team, which was ranked 4th in the nation at the 2008 ACUI Collegiate National Poetry Slam. “Before filmmaking, slam poetry was my form of storytelling and introduced me to so many of my closest friends and most trusted creative collaborators,” says Gallagher. When asked what aspect of his college experience influenced him the most, Gallagher says simply: “Interactions. Just meeting people from different backgrounds and understanding how everyone experiences things so differently.”

After graduating from SUNY Oneonta in 2008, Gallagher spent a couple of years working a cubicle job that he described as “absolutely miserable”. He soon quit that job despite having nothing else lined up, but quickly picked up work in freelance video journalism. Having wanted to be involved with the Jacob Burns Film Center for quite some time, he applied for a part-time Teaching Assistant position. “A week later, I was working in their Equipment Room,” says Gallagher. “A year later, I was working in their Projection Booth. Now, five years in – I get to create and edit with an absurdly talented team of coworkers.” Today, Gallagher is Lead Content Producer at the JBFC, while still finding time to work on personal projects. His first feature film was awarded “Best Documentary” at the 2014 Catskill Mountains Film Festival and screened at a number of other festivals, including DOC NYC and DocuWest. In 2014, Gallagher served as a co-organizer of TEDxSingSing, one of the first TEDx events held inside a maximum security prison. “It was one of the most rewarding experiences of my life,” he says. “The most rewarding moments were the guys on the inside who shared their stories.” Gallagher has also recently started production on his new documentary – a story of a man in prison who he believes was wrongfully convicted.

Tying It All Together

Sean Weiner’s and Sean Gallagher’s success stories, although very different, do share some commonalities. Namely, both filmmakers credit the support of their professors and mentors as an important influence in their professional careers. When describing Professor Michelle Stewart’s Cinema Expression 2 class that initially sparked his interest in film, Weiner explains: “I found in the course a professor that would be my mentor throughout school and beyond.” Michelle Stewart, Chair of the Film & Media School at SUNY Purchase, is now Weiner’s boss, as he teaches film directing in the Cinema Studies program. “The mentors were the ones that motivated me by believing in my potential.”

Similarly, Sean Gallagher mentions the importance of his former professors in guiding and supporting his career. “My endlessly supportive professor, Pat Murphy, introduced me to some really powerful films,” he says, describing the documentary studies class that sparked his interest in documentary film making. “I had an amazing group of professors who really believed in my work and invested their time and energy in me. In fact, a former professor came to see my film while it was screening in Portland, OR, and another former professor invited me to Canada to screen the film for her students.”

For SUNY students who aspire to work in film or similarly creative industries, Weiner and Gallagher both have advice to offer.

“You have to grow as a maker while you become integrated in this field,” says Weiner. “For a lot of folks that’s really difficult – it’s sometimes hard to self-motivate, and when you are working on other sets it’s often impossible to make time to put into motion your own set. The bottom line is you have to keep at it. In the end, you wind up in a place where you can really call this your career and yourself a professional.”

Serah was a social media intern in the SUNY Office of New Media, having graduated from the University at Albany with Business Administration degree with concentrations in marketing and finance and minors in economics and communications.