Teeing Off In The Wide World of Sports On TV 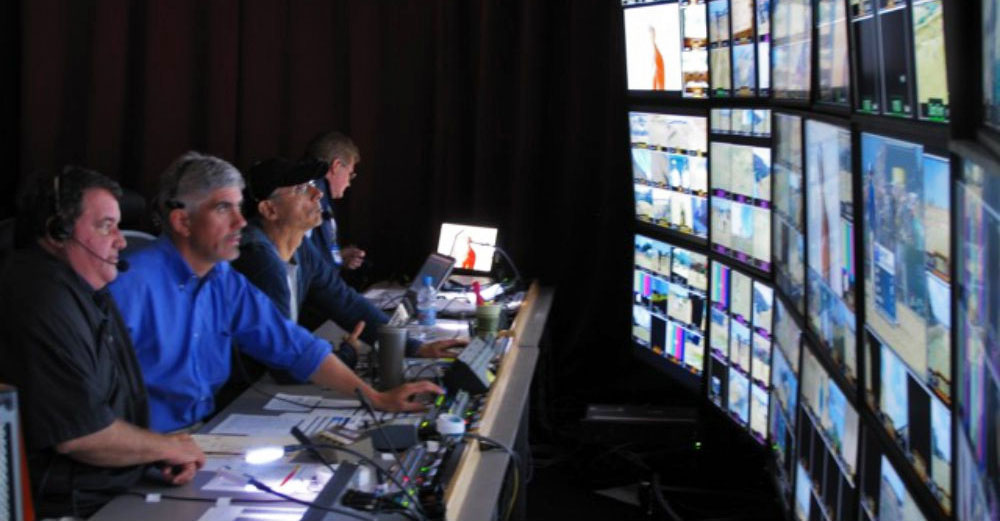 “Stand by all cameras.”

“Stand by to roll video tape in five.”

When John “JD” DelVecchio was growing up in Syracuse those were the words that inspired him. They were commands being given by a television sports director to his crew. When viewers tuned in to Monday Night Football in the 1960s and 70s, the beginning of every telecast included those words coupled with a behind-the-scenes glimpse into a broadcast production truck. “I remember being 10 years old watching that and thinking it was the coolest thing,” said DelVecchio. “I decided I wanted to become a ‘TV guy.’” Today DelVecchio is one of the best “TV guys” in the business. He’s an Emmy award winning director who has overseen coverage of some of the world’s biggest sporting events.

During DelVecchio’s senior year at Syracuse’s Corcoran High School he applied to several colleges. When he visited Onondaga Community College and was given a tour by a professor in the Radio & TV major, he knew it was the perfect fit for him. “Vinny Spadafora took me around and showed me I could get my hands on the equipment and begin learning right away. I was pulled in immediately.”

DelVecchio started taking classes at OCC in the fall of 1977 and knew he had made the right choice. “I loved it there. Vinny Spadafora and (professors) Cathy Hawkins and Robert Gaurnier were very honest and open and really great teachers. They related to us and it made a big difference.”

The hands-on experience promised during his visit turned out to be true. “The first week in radio classes we were learning how to edit tape and mixing turntables. Instead of spending our first year in a book we were working. Getting involved right away really hooked us.”

DelVecchio stayed busy outside of class as well. “I got involved in the college radio station, calling play-by-play of basketball games.” He would also shadow Spadafora who often broadcast high school basketball games on the radio. “We loved to go with him, watch him set up, work with him and learn from him.” DelVecchio also found opportunities working on telecasts of a local minor league football team, the Syracuse Aces.

DelVecchio graduated from OCC in 1979 and transferred to SUNY Fredonia where he would earn a bachelor’s degree two years later. DelVecchio returned to Syracuse, spent a year working in production at WTVH TV in Syracuse, then moved to New York City for a position with the brand new Satellite News Channel. That job would evaporate when CNN bought out Satellite News Channel after only one year in business.

As quickly as one door closed, another opened which would provide a lifetime of memories. DelVecchio was hired at NBC Television as an audio engineer. “I remember my first day there they put 10 of us on a subway and sent us to Brooklyn where we had to set up a stage for a show Bill Cosby was going to do. I remember running cables through rafters and doing whatever needed to be done.” The stage they built turned into the home of one of television’s most popular situation comedies, “The Cosby Show.” DelVecchio worked on some of the first episodes.

DelVecchio was also a part of Saturday Night Live throughout the 1984-85 season. The show had just lost its biggest cast member, Eddie Murphy, at the end of the previous season. Murphy would return several times to guest host. Regular cast members that season included Jim Belushi, Billy Crystal, Julia Louis-Dreyfus, Christopher Guest and Martin Short. During his time at NBC he also worked on the Today Show and the David Letterman Show.

Teeing off in the world of sports

In 1985 DelVecchio got his foot in the door in the world of sports and has been there ever since. He was hired by a company now known as PGA (Professional Golf Association) Tour Productions as a videotape editor. “I always loved golf dating back to when I was on the Corcoran High School golf team.  I didn’t set out with the goal of being in golf but when I got the opportunity I loved it.”

DelVecchio has been a director for ESPN and ABC’s golf coverage since the early 1990s. His first live lead directing opportunity came in 1994 when Tiger Woods won his first U.S. Amateur Championship at the Tournament Players Club in Ponte Vedra, Florida. DelVecchio also directs more than 20 events annually for NBC and the Golf Channel including the NCAA Golf Championships, the Solheim Cup and various major championships. “The structure of how golf is done can be very challenging. At any moment, you can have 30 golfers taking shots. It’s a challenge to capture everything that’s going on all at once and I enjoy it.” DelVecchio’s next high-profile challenge will come in July when he is the lead director at the British Open in St. Andrews.

While golf has been the constant on his resume for the last 30 years he’s also directed coverage of several other sports. DelVecchio won an Emmy Award for his work at the 1996 Summer Olympic Games. He’s also been a regular on the college football scene, directing numerous primetime games on ABC and bowl games. DelVecchio owns the distinction of broadcasting the two longest games in college football history, the longest of which lasted seven overtimes. “It was amazing and ultimately very tiring. In the moment, the adrenaline gets you through it.”

With the growth of cable and the exponential increase in the number of channels, longer work days have become part of the job. “When I started doing golf we’d be on for two hours. Now with the cable networks we are on for eight or nine hours. You get breaks within that time but it’s a long day. The excitement of the moments and the adrenaline that kicks in really carries you through. It’s as close to being on a team as we experience.”

Working long hours and traveling constantly with two children (daughter Jessica and son Alex) and his wife, Kathleen can be challenging. DelVecchio stays connected and involved in their sports at home and continues to manage Alex’s Travel Ice Hockey teams. Father and son also bond an old fashioned way. “We collect sports trading cards just like I did when I was a kid. It’s something we talk about regularly and it has really kept the fan in me alive.”

Throughout his decades in an ever-changing industry DelVecchio has lived by basic principles which are as relevant today as they were when he was hired for his first job in 1981:

Discussions about career growth and advice for future students inevitably bring DelVecchio back to his time at OCC. “We had a very close group when I was there and many of us still stay in touch to this day and are working in the industry. We are very fortunate to have had such a talented group.” As for DelVecchio’s own success it all comes back to Spadafora whom he met when he visited OCC. “I give Vinny a lot of credit for where I wound up. He was a good friend. I miss him.”

(Spadafora passed away in a car accident in March 2013. OCC’s Foundation has set up a scholarship in his honor.)

This article previously appeared in the Onondaga Community College Continuum.