A Summer at Sea and a Lifetime of Experiences 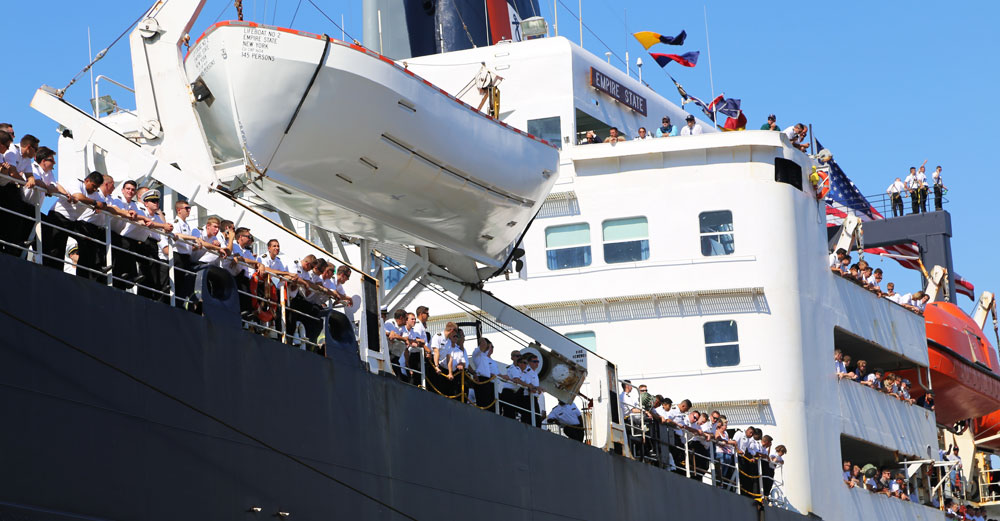 It’s been a long, exciting summer for the crew of SUNY Maritime‘s Empire State VI. Students returned from their 3 month Summer at Sea voyage on Monday, August 10, when they docked at the Olivet Pier in the Bronx. This was the final stop in the long journey that took the student crew of nearly 600 cadets to a series of exciting ports including Charleston, SC and across the Atlantic to La Spezia, Italy; Belfast, Ireland; and Cadiz, Spain. Each stop offered students the chance to explore an exciting new city while leading and being in charge of a maritime expedition on the Empire State VI. 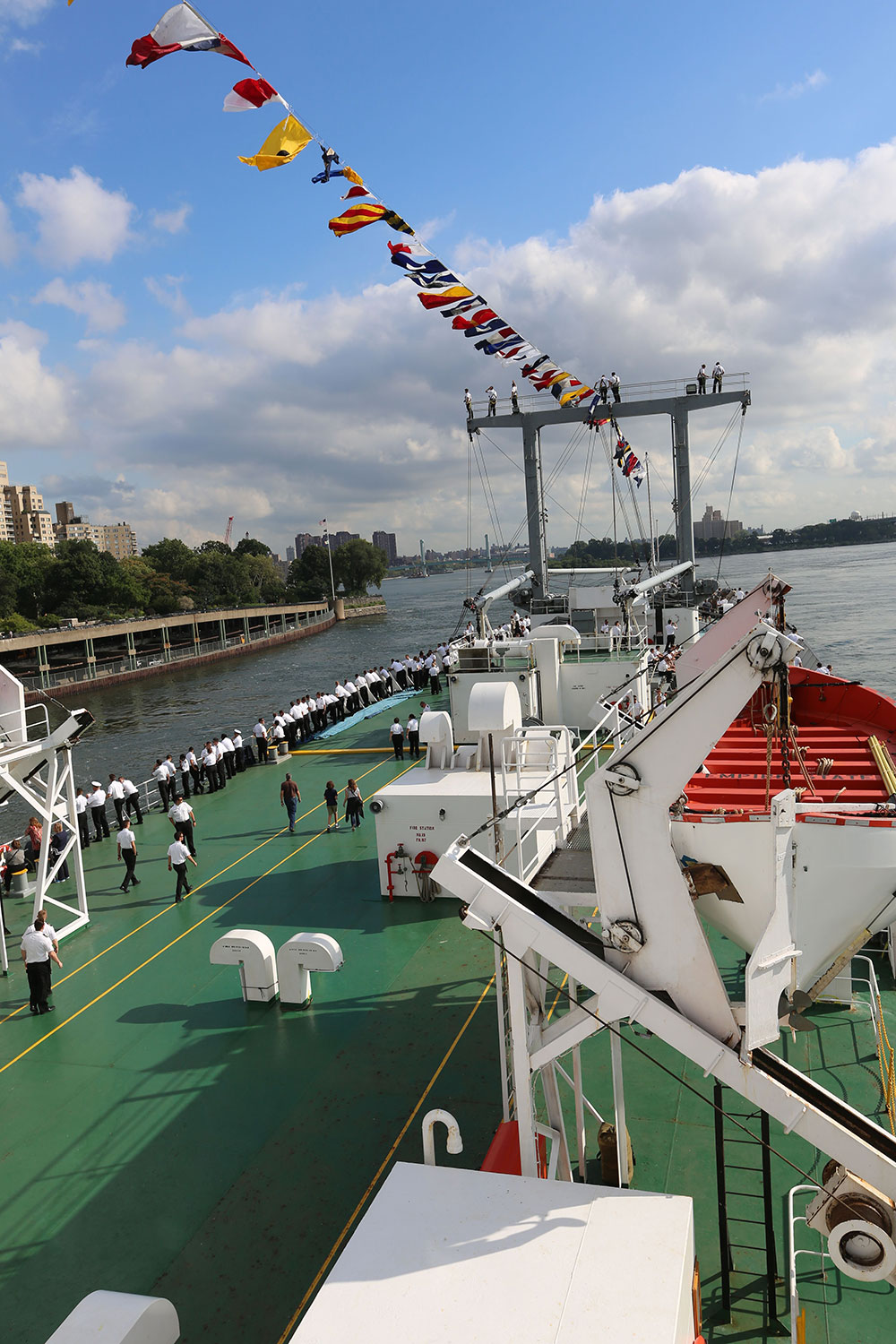 It’s not just the stops which were educational on this trip. Being aboard a training ship like the Empire State VI offers students real-life experience in the day-to-day work involved in the maritime industry. In fact, the Summer at Sea program is a required experience for Maritime students looking to enter the coast guard Students aboard the Empire State VI learned the basics on up through this opportunity. And this type of training is obviously successful. Recent graduates of SUNY Maritime College have benefited from a near 100% job placement rate within three months of graduation and have received national recognition for having the highest earning alumni among state colleges and universities.

While the results speak for themselves we thought it would be a bit more fun to let the cadets speak for the program. That’s why we contacted Cadet Beau Warington, who just returned from the latest “Summer at Sea” voyage, to find out about the experience.

A senior at SUNY Maritime, Beau is studying Marine Transportation while pursuing a USCG Deck License and is preparing to take employment in the shipping industry for oil and gas operations upon graduation. In addition to that, he is also a starting defensive back and captain for the Maritime football team. This year’s summer at sea was his 4th time aboard a ship for applied learning opportunities, one completed in each of his four years at Maritime, and each one was a great experience he will never forget. During the Summer at Sea, he tells us how students are given responsibility to take charge of the ship’s operations throughout the term. This includes navigating, maintaining, and communicating with ports and other maritime agencies throughout the journey to coordinate arrivals, docking assistance, and much more.

At one point during the summer expedition, the Empire State VI needed to re-route to a different port. Scheduled to dock in Croatia, the ship was not given clearance to do so. Cadet Warington was in charge of communicating with the foreign agencies and distributing the Empire State VI’s itinerary and position in order to arrange tugboat services and a path to dock in Palma De Mallorca, Spain.

The Maritime students get an experience they will never forget aboard the 17,160 ton , 565 foot long Empire State VI, despite the ship beginning to show its age. Delivered in 1962, the ship provides cadets with essential hands-on experience in managing and maintaining a sea-going vessel. But the average age of ships used by state marine academies is 35 years old, and the 53-year-old Empire State VI is the oldest among them. Cadets spend long hours maintaining the conditions aboard the ship, from scraping/cleaning the rust build up on the hull to maintaining the operations centers.

Although some technology on board the ship, such as the radars and computer tracking systems, is up to date, modernized transport and navigation capabilities would be a huge benefit to the Maritime students, according to Beau. For example, the Empire State VI is built without bow thrusters, meaning that it needs assistance docking from tugboats to drag it to shore safely; and the Maritime ship uses a steam engine to power it across the water, whereas modern ships are built with diesel or gas turbine engines that provide simpler operation and more fuel efficiency.

The need for a new ship is urgent. Recently, The Bronx Chronicle wrote about the push to secure funding for SUNY Maritime College, led by Reps. Joe Crowley (D-NY), Vice Chair of the Democratic Caucus, and Dan Benishek (R-MI). Politico NY wrote about SUNY Maritime asking for state help with federal funding to help produce the licensed mariners that the maritime and shipping industries need. Chancellor Zimpher also issued a statement supporting the need for a new ship, in which she stated,

“The vast accomplishments of SUNY Maritime students, faculty, staff, and alumni – highlighted by a near 100 percent job placement rate within three months of graduation – speak volumes about the quality of the College and its service to our economy. Together with campus and state officials, I urge the federal government to secure funding for a new state-of-the-art Empire State VII.”

Admiral Michael Alfultis, President of SUNY Maritime, was a guest on Capital Tonight for an interview where he was asked to explain why the college is seeking federal funding for a new ship.

The Summer at Sea is a required experience for Maritime students training towards a United States Coast Guard, or Merchant Marine Officer’s License. About 40% of SUNY Maritime graduates utilize their license and go to sea after graduation. 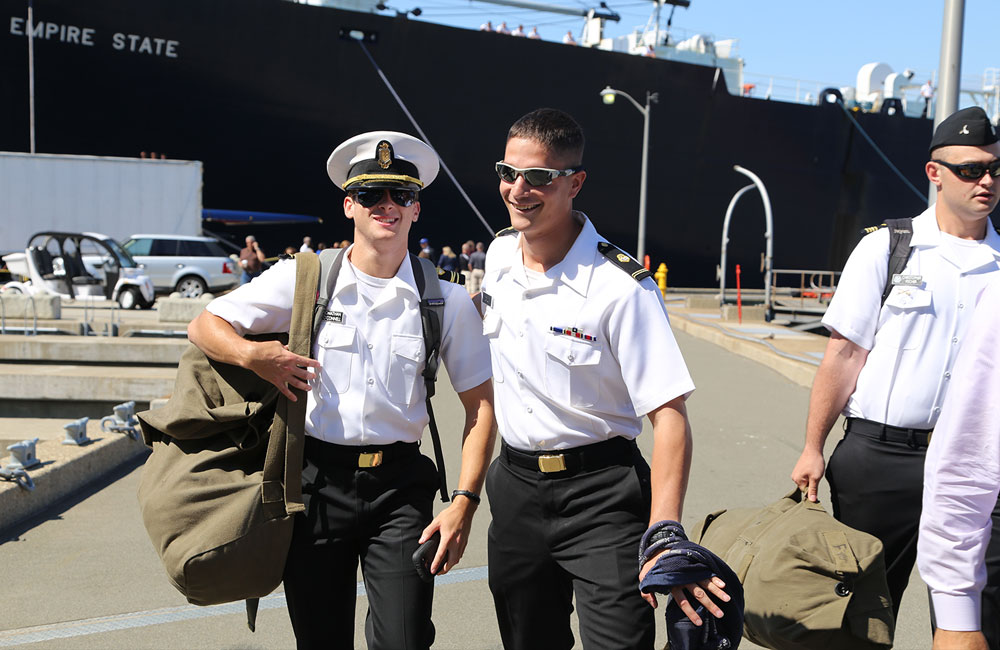