Producing Excellence Off the Field 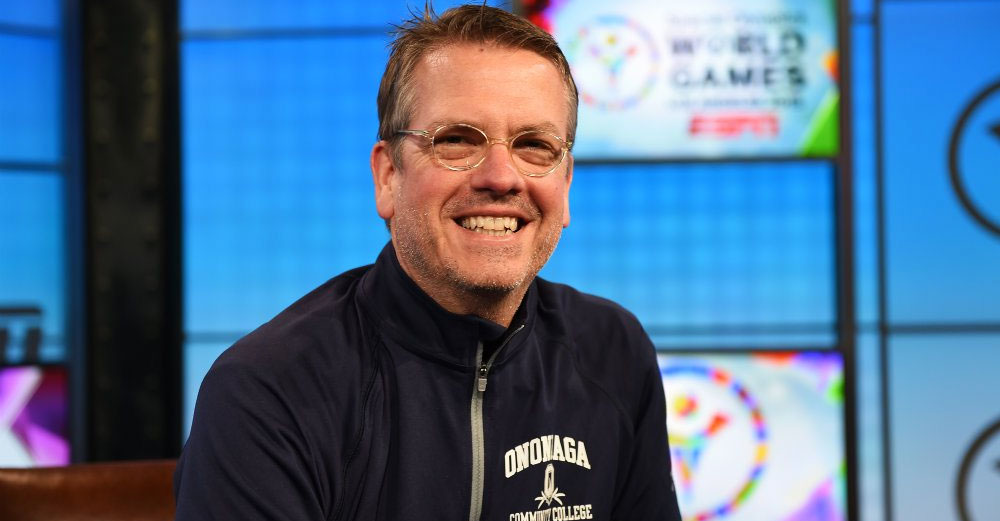 It was the fall of 1981 and Bill Bonnell was driving to the Onondaga Community College campus for his first day of college classes. He didn’t have music blaring with the windows down. He wasn’t carpooling with any fellow graduates of North Syracuse High School. Bonnell was driving to campus with his mother, Janice Bonnell, whom he had made a deal with. “She was working as a nurse at Course-Irving Hospital but was a few credits short of getting her degree. I convinced her to come back to school with me and finish her work. How many kids go to college with their mom?”

Bonnell’s mother has been a central figure in his life. He lost his father to cancer when he was a freshman in high school. Bonnell’s three older siblings were out of the house by then, so it was just him and his mother. “She had to be my mom and my dad. She was always very supportive of me in every endeavor. I wouldn’t be where I am today without her never ending support.” 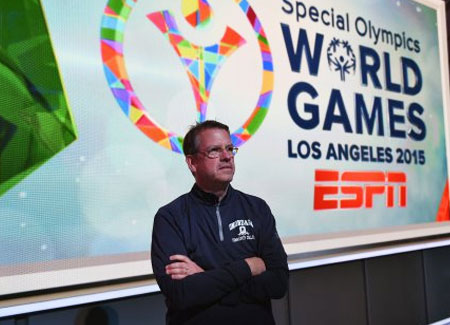 Bill Bonnell at the 2015 Special Olympics in Los Angeles.

Where Bonnell is today is at the top of the television sports producing profession. He’s coordinated coverage of practically every major sporting event you can think of. If you’ve watched Super Bowls, Olympic Games, professional tennis tournaments, pro football or college football, you’ve seen his work. Bonnell has won more than a dozen Emmy Awards throughout his career – a career that started when he was in high school and blossomed while he was a student at OCC.

Bonnell often uses the word “serendipitous” when describing his career journey. Every opportunity has introduced him to people who have led him to future opportunities. It started as a student at North Syracuse High School where a severe ankle injury sidelined him from playing basketball. He dreamed of becoming a sportscaster, so he decided to contribute by being the public address announcer for home games.

Back in those days, Syracuse public broadcasting station WCNY televised live high school sports events. One night they showed up at North Syracuse for a basketball game with their big production truck and a large crew of workers. “To see that truck and all of those people come into your school was a big deal.” Bonnell introduced himself to the person in charge, told him he wanted to work in the industry and a career was launched. He started working behind-the-scenes on statewide broadcasts of Syracuse University football, Empire State Games, wrestling, lacrosse, basketball and more. “They really took me under their wing. For a kid like me it was unprecedented to get that kind of experience.”

Bonnell loved working behind the scenes on what is known as the production side of a telecast. “I learned very early in my career doing graphics (the words and pre-produced pictures you see on your screen) was the ground level of production. I worked hard to learn graphics.”

In July of 1981, a month before Bonnell would start taking classes at OCC, he went to the Carrier Dome where ABC was televising the National Sports Festival, a multi-sport competition created by the United States Olympic Committee to showcase Olympic sports in Olympic off-years. Bonnell introduced himself to people working for ABC. Two months later, he was working on ABC’s Monday Night Football.

Planting the Foundation at OCC

When Bonnell started taking classes at OCC he was going non-stop. There were classes during the week, Syracuse football broadcasts on Saturdays and on Sundays he was flying to wherever the Monday Night Football game was. “The people in the Radio & TV major were very understanding and great to work with. I loved my professors, Vinny Spadafora, Cathy Hawkins, Tony Vadala, who was very new at that time, and all of those people. They knew the importance of me getting experience. I still had to do all of the work but they helped me juggle all of these things at the same time.”

Bonnell earned his degree in 1983. “Going to OCC was a great experience. The classes were small. It was very intimate and personal. It felt like family.” He transferred to Syracuse University and continued his busy work schedule outside of class. In the summer of 1984 he would get the biggest break of his career. ABC hired him full time to work at the Summer Olympics. Bonnell spent a couple of months preparing in New York City, then flew to Los Angeles for the games. He was the graphics production assistant for ABC’s prime time shows, working under legendary sports producer Roone Arledge. Bonnell’s experience was so positive he considered not returning to Syracuse University.

While working in Los Angeles he found himself having life discussions with a co-worker named Bob Iger. “Bob told me ‘You’ve got to go back. You’ve got to finish. Get your degree. ABC Sports will always be here.’ Based on what I considered to be his fatherly advice I went back and finished.” It was good advice from a successful businessman. Today Iger is well-known in his role as Chairman and Chief Executive Officer of the Walt Disney Company.

Becoming an All-Star in Sports Programming

Bonnell graduated from Syracuse University in the summer of 1985. As he was finishing his last class, he was hired by CBS Sports to work on their National Football League coverage that fall. The list of sports events he’s covered and people he’s worked with since the 1984 Summer Olympic Games are as impressive as any you will find in the broadcasting industry:

As Bonnell’s career has flourished so too has his personal life. During one of his trips home to Syracuse to visit his mother in the late 1980s, he dropped in on her at Crouse-Irving Hospital. “I saw this lady who worked with my mother running around and asked my mom, ‘Who is that?’ She said, ‘That’s Mary Beth Dennis.’ I tried for months to get her to go on a date with me and she kept saying no.” Dennis eventually gave in and they spent their first date enjoying dinner at the Sherwood Inn in Skaneateles. “When I got home that night my mother said, ‘You have dots all over your face!'” Bonnell had chicken pox and two weeks later his new girlfriend would too. Despite the virus their relationship survived. They married in 1990. Today they have two children: 14-year-old William and 12-year-old Katherine.

While the children enjoy some down time in the summer, Bonnell’s is filled with work. In July he produced ESPN’s ESPY Award Red Carpet Show. Ten days later he was producing the Special Olympic World Games in Los Angeles. He loves coordinating coverage for sizable events. The one he dreams of working on the most has nothing to do with sports. “I’d love to produce the Academy Awards someday. I love big events. I love entertainment. I’ve worked on Olympics, Super Bowl’s, national championship games. The Academy Awards would be a tremendous accomplishment.”

Accomplishments are what Bonnell and his family are all about. His mother earned her Nursing degree from OCC in 1982. His wife is also an OCC grad. Mary Beth earned her Math & Science degree in 1985. Even one of Bonnell’s brothers, Robert, has a diploma from OCC. He graduated in 1977 with a degree in Business Administration. “I really love OCC and the experiences I had there. I know the Electronic Media Communications Department is in great hands with Tony Vadala’s leadership. OCC has been a big part of my life and always will be.”