An Inspiring Journey Leads to Becoming A Doctor of All Trades 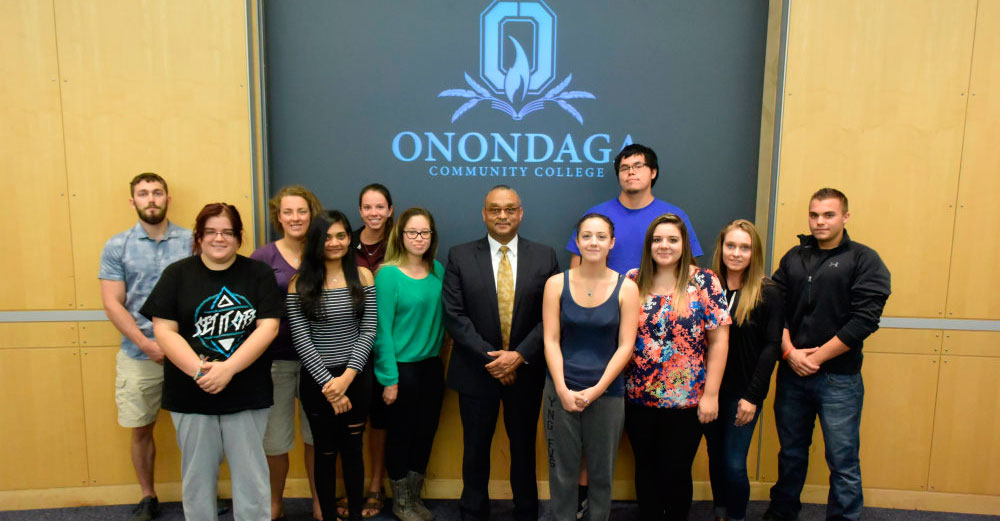 You’ve no doubt heard about a jack-of-all-trades, but for Dr. Daryll Dykes ’83, he is a doctor, literally, of all trades. The Onondaga Community College grad recently completed his Juris Doctorate (J.D.) in 2014, to go along with his Doctor of Medicine (M.D.) and Doctor of Philosophy (Ph.D.) to complete an impressive triumvirate of advanced degrees and become one of the foremost spinal surgeons in the world. As impressive as this achievement is, examining his journey is almost, if not more, inspiring. “It all started when I was five,” he said, “I remember going frequently with my grandmother to her physician and remember him as a nice and genuine person who was helping her.” In addition to this early exposure, Dr. Dykes was also influenced by the fact that his mom was a nurse, so he was often around her place of work, which made the atmosphere all the more intriguing.

This fascination with science stuck with him through his years on the West side, but as he was approaching his senior year at Fowler High School he began doing the math as to how many years of school were in front of him and the answer was overwhelming. “Being 18 years old I wasn’t initially in love with the fact of spending the next 21 years of my life in school,” Dr. Dykes said. This scenario was giving him second thoughts, but all of those doubts were put to rest after having a talk with his dad. “After showing him that it would take me 21 years of education or until I was 39 years old to accomplish all of this, he looked at me and said, ‘okay, well if you don’t do this how old will you be in 21 years? But without this education!’ That message sealed the deal for him and after graduating from Fowler, he enlisted in the Marine Corps as a way to help pay for college and then enrolled at OCC to major in math & science. 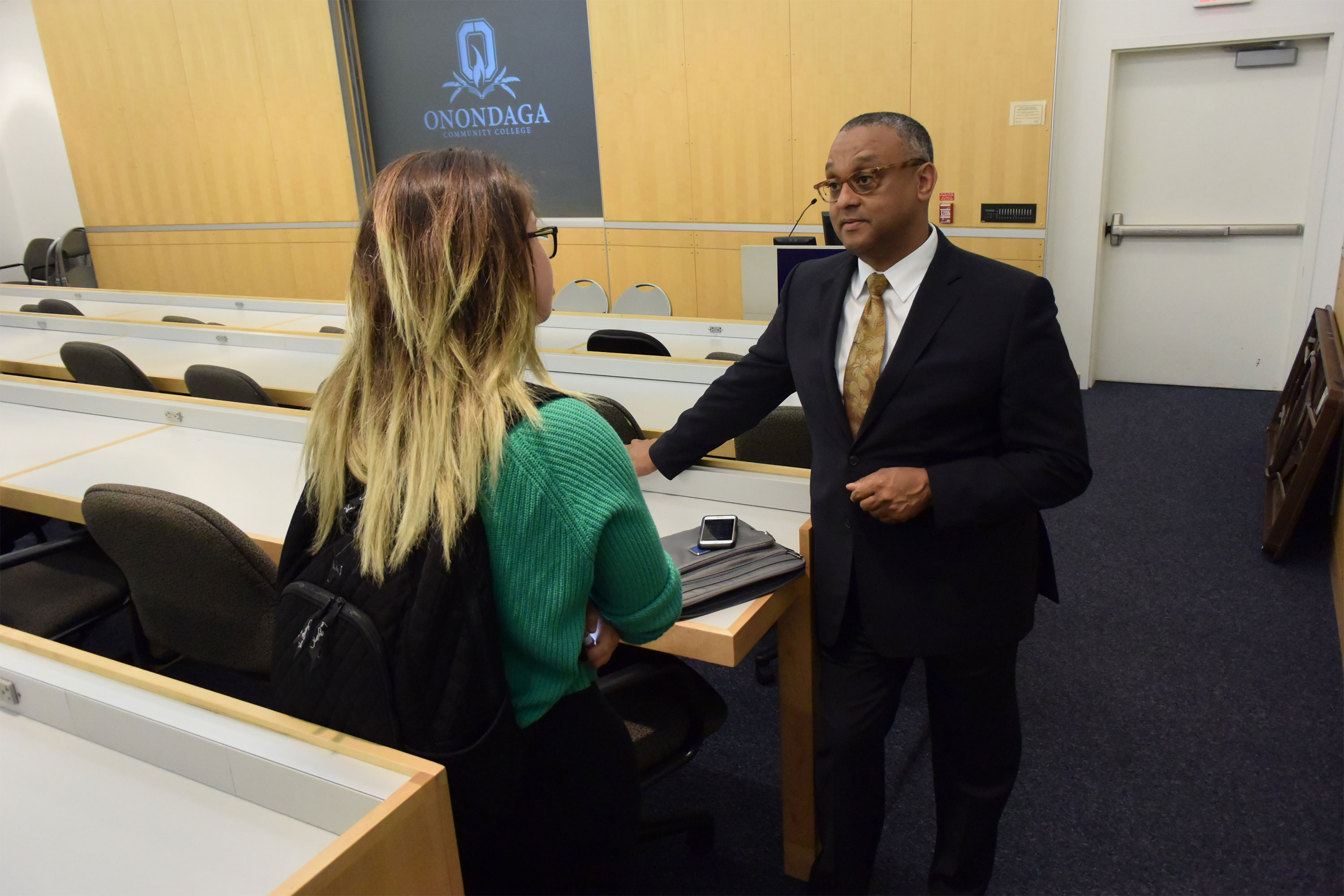 Upon entering OCC, Dr. Dykes thrived and is quick to say that the College instilled the very important qualities that are part of him to this day. “The classes and professors at OCC really ignited my passion for learning,” he said “the professors in particular really became the first people to see my talent, invest in it and push me to do great things.” This show of investment by others, outside of his close friends and family, was something that was foreign to him and allowed him to begin thinking about the importance of those personal connections instead of just focusing on grades. This experience would prove to be a valuable life lesson for Dr. Dykes, which he would use again and again in his educational and professional life.

This revelation could not have come at a better time as the next four to six years of his education between undergrad and medical school proved to be the most challenging and tested his mettle as to whether he truly wanted to pursue his dream. “I struggled,” he said, “to the point where being in a pre-professional program, my advisor strongly encouraged me to find another career.” His advisor would not write him a letter of recommendation to medical school, which for some would have flat-lined their initiative, but Dr. Dykes viewed this as just another challenge. He decided to get a job at SUNY Upstate Medical University as a blood bank technician and prove to the doctors that he engaged with there that he was serious and worthy of being admitted. The unconventional theory was proven correct when his application to medical school was approved because the doctors on the admission board knew who he really was and were prepared to give him a chance based on his determination and work ethic.

It was this work ethic that led a few mentors at the hospital to encourage Dr. Dykes to apply to the prestigious MD/PhD program through Upstate Medical. “There was a new nationwide priority, partly sponsored by the federal government to train more medical scientists. Since this was my passion and since I had no way to pay for medical school, this was a great opportunity,” Dr. Dykes said. Much to his delight, he was chosen from a very competitive group of medical students and from there, Dr. Dykes excelled during his time at Upstate. He decided to focus his career on orthopedic surgery after an orthopedic doctor took him under his wing.

Upon graduation from medical school in 1995, Dr. Dykes became the third person ever to graduate from the MD/PhD program at Upstate and one of the first few nationwide. After completing his residency, he and his wife Sharon, who is a general surgeon herself, were selected to go to Minneapolis for their first jobs. Dr. Dykes trained at the University of Minnesota and Twin Cities Spine Center, where he was able to learn from some of the most heralded spinal surgeons in the world. He went on to become a managing partner of the Center where he assumed responsibilities including legal and regulatory work. Partly motivated by these responsibilities, as well as increasing leadership roles in the American Academy of Orthopaedic Surgeons, Dr. Dykes went on to pursue a law degree. In 2012, after ten years, he left the Center and became the managing partner of his own practice called the Medical and Surgical Spine Consultants of Minnesota. He continues to care for patients, teach, mentor and conduct health policy research.

Despite all of his success and achievements, Dr. Dykes remains very much that wide-eyed child who grew up on the West side of Syracuse who is always looking for his next adventure. “My path may not have been the most ideal, but I was making my way and enjoying this blessed journey to the fullest,” he said. “My personality is such, that, I would not have been happy if I did not get to the point in my professional career where I did not utilize my intellect and experience,” he said. “I always tell young people that it is okay to settle for a job they didn’t love in order to make it to the next level, but do not settle for anything less than their dream.” His journey epitomizes this advice and, despite all of his accomplishments, he remains very appreciative and humble towards those individuals who helped him along the way, which is why he is so quick to return the favor whenever he can. “For me, it all started at OCC and those initial connections with faculty. Their nurturing attitude encouraged me to seek out other mentors at various stages of my life who would have a huge impact on my career,” he said. “Now that I am on the other side of that,” he said, “there is nothing more gratifying to me than giving someone a chance and to watch them achieve their dream and flourish.”