Students Pledge To Not Be Bystanders To Violence 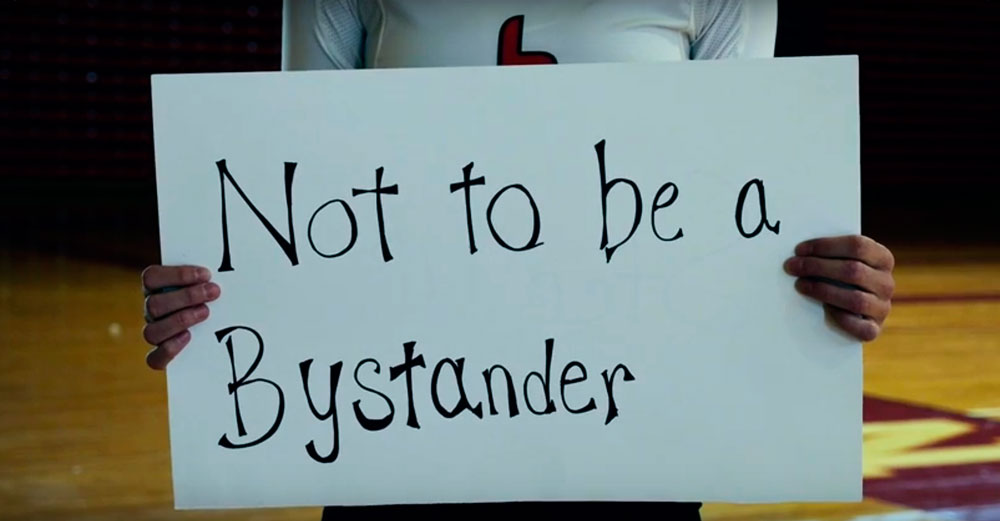 Part of the mission of SUNY is to develop good citizens – individuals who care about their community and social issues and will step up and not be afraid to take action and help when needed. Recently, SUNY has been working hard to combat campus assault and  provide resources for victims of sexual assault in our effort to keep students safe from sexual assault and violence of all kinds. With this philosophy in mind, the student athletes at SUNY Oneonta stepped up as advocates by producing a pair of videos, one for the “It’s on Us” campaign and one that deals with Bystander Intervention.

The “It’s on Us” campaign began on Sep. 19, 2014 when President Barack Obama and Vice President Joe Biden along with members of the sports and entertainment industry created a video that made a statement that “It’s on Us” to make a personal stand and to be part of the solution and not part of the problem. The video, which included Cleveland Cavaliers forward Kevin Love, actors Jon Hamm and Connie Britton tells their fans to heed the president’s call, suggesting that people need to take responsibility for preventing rape among U.S. college students.

The “It’s on Us” Pledge is a personal commitment to help keep women and men safe from sexual assault. It is a promise not to be a bystander to the problem, but to be a part of the solution. Participants, or advocates, pledge to

In the latest video by the student athletes of SUNY Oneonta, they have pledged to “step up, speak up and take action” as part of an initiative to bring awareness to not being bystanders and to intervene to promote safety and protect those that may be in harms way. The video speaks to Bystander Intervention, which is a philosophy and strategy for prevention of various types of violence, including bullying, sexual harassment, sexual assault, and intimate partner violence.

2015 SUNY Oneonta graduate and Captain of the women’s tennis team, Brynn Sussman, produced both videos. The “It’s on Us” video was recognized by the NCAA as its Diversity Spotlight winner in March.

“Putting together both videos was a fun and a very enjoyable experience for me!” stated Sussman. “It is always fun working with my fellow student athletes, but it was even more rewarding to come together to promote these important messages. Being leaders on our campus, student athletes have the opportunity to have their voices heard. Hopefully these videos will help start the conversation.”

Watch the Bystander Intervention video below:

Tags: anti-bullying, it's on us, sexual assault, SUNY Oneonta, violence