30 Days of Giving 2015: Morrisville Holds Back To School Drive

The Morrisville State College athletics department Back to School Drive efforts over their opening week of athletic events yielded 1,100 donated school supply items for the students in the Morrisville-Eaton Central School District.

The items were presented to teachers, staff and students at the Edward R. Andrews Elementary School during their Character Education assembly.

Student-athlete representation from nearly every intercollegiate team assisted in delivering supplies as they were applauded for their efforts on character, civility and service to the community. Come assembly end, the student-athletes and all who donated items to the drive, received a standing ovation.

Morrisville State student-athletes make service to the local and surrounding communities a priority as part of character and leadership building. Last year alone, the Mustangs participated in more than 30 events, logged more than 1,700 hours, and donated more than $9,000 to charitable organizations. 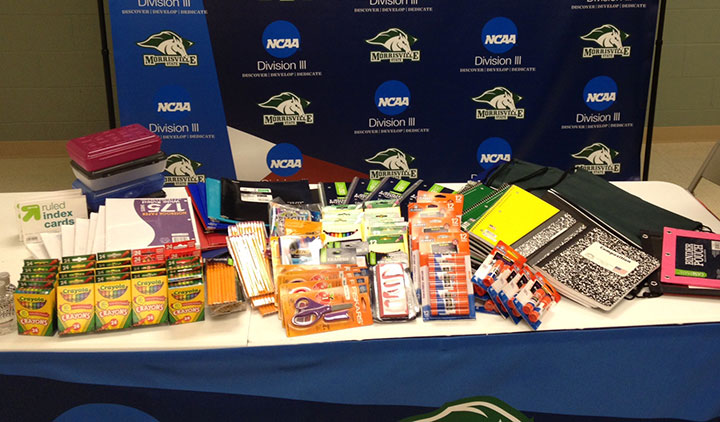 A table full of back to school goods that were donated at Morrisville State College’s Back to School Drive.