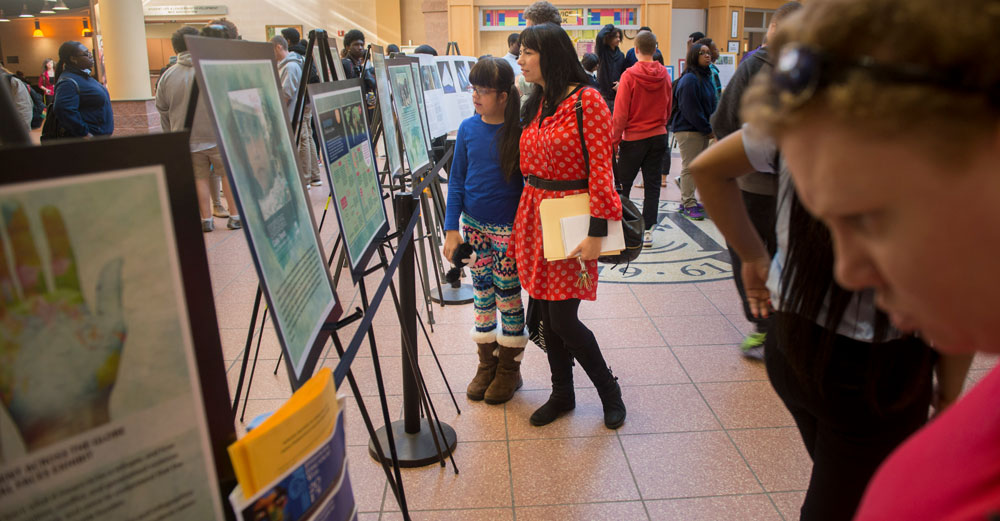 Before coming to Monroe Community College, Khalid Kadhum lived in Iraq for over three decades.

During these years, he endured the hardships of three wars, witnessed bombings and kidnappings, and survived a gunshot wound by a group of terrorists at a retail store where he worked. He often feared for his and his family’s safety.

Political instability in his native Iraq and in the Middle East forced Khalid and his family to relocate several times and interrupted his dream of finding a job that put his baccalaureate degree in statistics to good use.

In 2013, the United Nations helped him, his wife and their two young children relocate from Syria to Rochester, N.Y. After briefly attending BOCES, Khalid, now 49, began his education at MCC in spring 2015.

Khalid’s experiences as a refugee and his journey to MCC are documented in “MCC Global Faces,” an on-campus exhibit created through the collaborative efforts of MCC students in three classes: writing, English for Speakers of Other Languages, and photography.

Their assignment was to tell the stories of the immigrant and refugee students in English for Speakers of Other Languages class through words and images. Global students shared their personal stories of migration with their American-born peers, who then turned the interviews into essays combined with images taken by photography students.

Through the exhibit, people learn what life is like for individuals abroad fleeing their homeland. They also gain awareness of the magnitude of human displacement worldwide as a result of persecution, armed conflicts, violence and human rights violations.

Beyond the grim statistics, the project also aims to instill significant lessons in the cross-cultural exchange between MCC’s refugee and U.S.-born students by giving a local human face to the growing world crisis. Students profiled in the exhibit came from Albania, Bhutan, Burma, China, Cuba, Eritrea, Iraq, Jordan, Nepal, Ukraine and Yemen.

“The project demonstrates the power of learning across cultural lines. The students who participated in the project were transformed and their views on refugees and immigrants coming to the U.S. were expanded and changed in an experiential way,” said Audra Dion, assistant director of MCC’s Global Education & International Services Office and coordinator of the exhibit. “We seek to enhance student learning by infusing global perspectives into the classroom and into co-curricular programming in a dynamic way that also engages the richness of the international community that studies here at the college.”

MCC students in the writing class said the project not only broadened their understanding of the world and the challenges refugees face, it also showed that immigrants and U.S.-born citizens alike hold similar hopes and dreams in life.

“It put a face on what we see on the news every day. I got to meet somebody that is interesting and intelligent and is doing the same things I’m trying to do: learn more, raise a family, have a career, and live and be happy,” said Charles Insalaco, 39, a liberal arts and sciences major who wrote about Khalid for the project. Like Charles, Khalid is a liberal arts and sciences student.

Charles said hearing Khalid’s story “helps to put things in context. Seeing that someone could come from so much struggle and then is here to educate himself more, share in a community and move forward … it pushes me to succeed more.”

The project not only enriched students’ learning experiences, it also created friendships between those from different cultural backgrounds.

Since completing the project, Khalid and Charles have kept in touch and discovered they share some common experiences in their personal lives, such as having children who are around the same age. Both plan to bring their families together soon to do a fun winter activity.

“Every week I know him more,” Khalid said.

Charles said he wants to see his friend achieve the American dream.

“I make sure whenever I see him to get to know him a little bit more and learn more about his culture,” Charles explained. “I’m hoping that he takes advantage of my offer: ‘If you need something, like a ride or anything like that, please get in touch.’ ”

Next post 30 Days of Giving 2015: Literacy Matters at FMCC