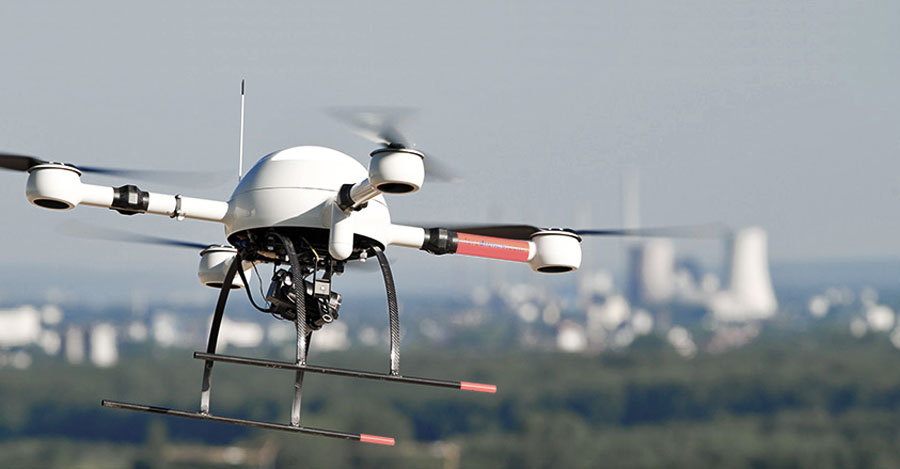 After building a successful business in Quebec, Vivien Hériard Dubreuil started looking for ways to expand into the United States. As CEO of Avyon and ProDrones USA, he already had a fleet of aircraft and years of experience analyzing flight data for agriculture, civil engineering, surveying, and the military. But he needed an airfield approved by the Federal Aviation Administration (FAA), room to assemble new drones on-site, and an academic partner that could provide access to a well-trained labor market.

He found it at Mohawk Valley Community College (MVCC) and START-UP NY, a program that offers new and expanding businesses the chance to collaborate with colleges and universities across the SUNY system. The businesses get to operate tax-free for 10 years in a campus-based enterprise zone, complete with state-of-the-art SUNY facilities and resources, while SUNY students gain access to internships, workforce development, and career opportunities.

“We are a very good fit,” says Dubreuil, who has been working on unmanned aircraft systems (UAS) since 1997. “Rather than starting from scratch, our concept was to come to the United States with technology that had already been proven in Europe, where commercial flights have been allowed for years. We’re impressed with the Airframe & Powerplant Technology Program at MVCC, which is a great source of qualified pilots and technicians, and with the facilities at Griffiss International Airport. To be part of START-UP NY is an enormous advantage for us, and it all makes perfect sense.”

With an A&P program that has capacity for 75 students a year, it makes sense for MVCC, too. The college offers a rigorous, full-time, three-semester curriculum, based at Griffiss, where students gain hands-on experience with real equipment and real aircraft, attending classes at the base’s aviation training center, followed by an FAA examination and an MVCC certificate. Building on the partnership, MVCC’s Frank DuRoss, Executive Director of Institutional Advancement, hopes to see students receiving internships at ProDrones, graduates becoming full-time employees, and employees returning to the classroom as guest lecturers.

“It’s a natural,” says DuRoss. “Our faculty is very involved, and the company has been working closely with the director of our A&P program, talking about the skill sets and training our students will need to find employment in the field. The partnership is clearly aligned to our mission of work force development, and as the technology for UAS continues to grow, we can expect to keep creating new opportunities for MVCC and MVCC graduates.”

In May 2015, ProDrones received FAA exemptions to begin commercial unmanned flights in New York. Later that summer, ProDrones launched its contract with Cornell University, surveying a series of cornfields, and completed a successful test run with Pictometry International, which used an Avyon microdrone to capture aerial images of a lumber processing facility in Quebec.

In October, ProDrones opened its new office in the MVCC Tax Free Zone, located on the college’s Rome campus. After hiring an office manager, Dubreuil posted job openings for a pilot – the FAA requires a licensed pilot to fly any unmanned commercial aircraft – along with a technician to assemble and maintain the drones, and a software developer to refine the data analytics. Within this first year in Rome, Dubreuil hopes to create an American assembly line and expand its services around the state.

Along with distributing aircraft manufactured in France, Avyon produces two German-engineered drones of its own. There’s the MD4-200, which flies at 17.9 miles per hour, and the larger MD4-1000, which flies at 26.8 miles per hour, with a range of 12.4 miles and a maximum flight time of 88 minutes. Both are industry workhorses, and both perform the essential functions of commercial drones: producing real-time photos and videos from hard-to-reach locations for use and analysis by building inspectors, civil engineers, farmers, and law enforcement professionals. And in an industry where the sky isn’t the limit, both have enormous potential for growth.

“We are still at the beginning,” says Dubreuil, who expects to create five new jobs and invest $1 million over the course of the company’s participation in START-UP NY. “MVCC would like to increase its UAS program, and ProDrones would like to have the best work force possible. These are goals that we can reach by working together, which makes this the best partnership we could possibly get.”