From Classroom to the Big Game, This Alum is Living Her Dream 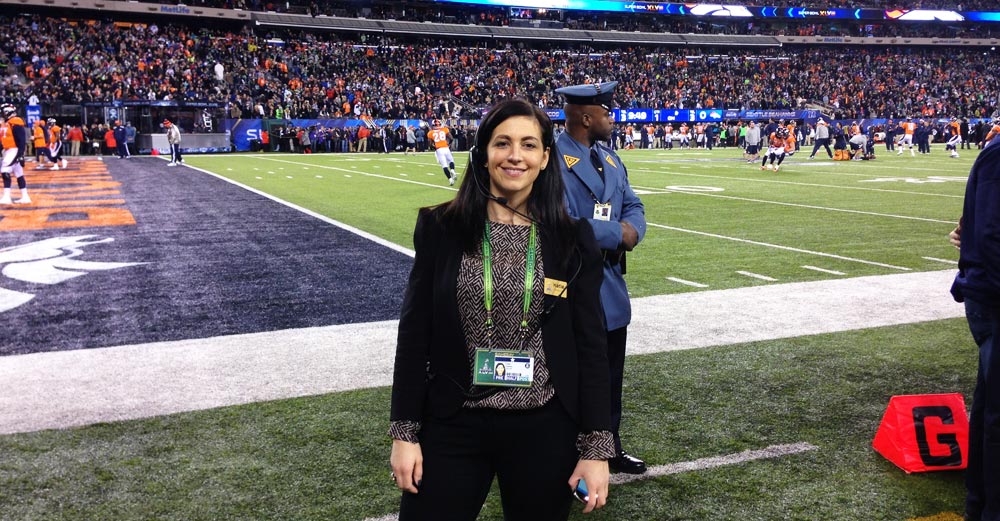 From Cortland classrooms to NFL sidelines, Katie Keenan ’05, M ’10, has come a long way since her years as a SUNY student. Graduating with a degree in sports management, Keenan has gone on to work in event operations for the NFL, and will be spearheading preparations for the upcoming Super Bowl. So if you want to get on the field for Super Bowl 50, you’ll have to go through this SUNY Cortland graduate to do it. The former sport management major is trusted with a crucial job for one of the world’s most visible sporting events.

Since her early days as a student, Keenan knew she wanted to pursue a career in the sports industry, and has since been able to apply the knowledge learned from her professors in the Sports Management department, including Lisa Scherer, Jason Smorol, Ted Fay, and David Snyder, to the work she does today. Cortland offers the oldest sports management program in the SUNY system and has helped numerous students secure internships and job placement for ESPN, Sports Illustrated, NASCAR, the New York Jets, the New York Rangers, and others. Cortland also offers related majors in athletic training, coaching, exercise science, fitness development, and recreational management.

As one of the world’s largest sporting events, Keenan needs to take extra security precautions while preparing for the Super Bowl. But how did Keenan make her dreams become reality?

“I felt deep down that this is what I was meant to do regardless of how hard I would have to work to get there,” said Keenan. “My freshman year of college gave me a crash course in many things, but most importantly the ups and downs and ins and outs of the sports industry. All of my professors were current or former industry professionals and shared infinite wisdom through their experience that I listened to and filed away for the future.”

This will be Keenan’s third time working the Super Bowl. Throughout the year, she also works on running the NFL Draft, the league’s Kickoff event, the International series, among many others. Prior to joining the NFL’s league office in Manhattan, Keenan also worked with the NHL’s New Jersey Devils, where she spent time at the Stanley Cup Finals, the NCAA Men’s Basketball East Regionals and countless high-profile concerts.

While a student at Cortland pursuing a minor in Spanish, Keenan was able to earn the internship of a lifetime, going abroad coordinating events and organizing credentials with the International Paralympic Committee. She’s been to the Olympics and Paralympic Games too.

“My internship through Dr. Fay with the International Paralympic Committee in Germany and at the Paralympics in Torino in ’06, solidified that I had made the right decision and set me on the path that got me to the NFL and Super Bowl,” Keenan said.

As Super Bowl Sunday nears closer, Keenan and her staff members continue to work tirelessly in Santa Clara, California, making sure everything will run smoothly at Levi’s Stadium for the big day. The weeks leading up to the event are tense and non-stop busy, but that doesn’t stop her from loving every minute of it. As she does, Keenan encourages SUNY students to work towards what they love. Her advice?

“Find something that makes it not feel so much like work and be humble but set goals and do whatever it takes to achieve them,” said Keenan. “My path was not direct but every stop on the way/bump in the road got me where I am today. Sounds cheesy, but I 100% believe it!”

You can read another full profile of Katie on the SUNY Cortland website.