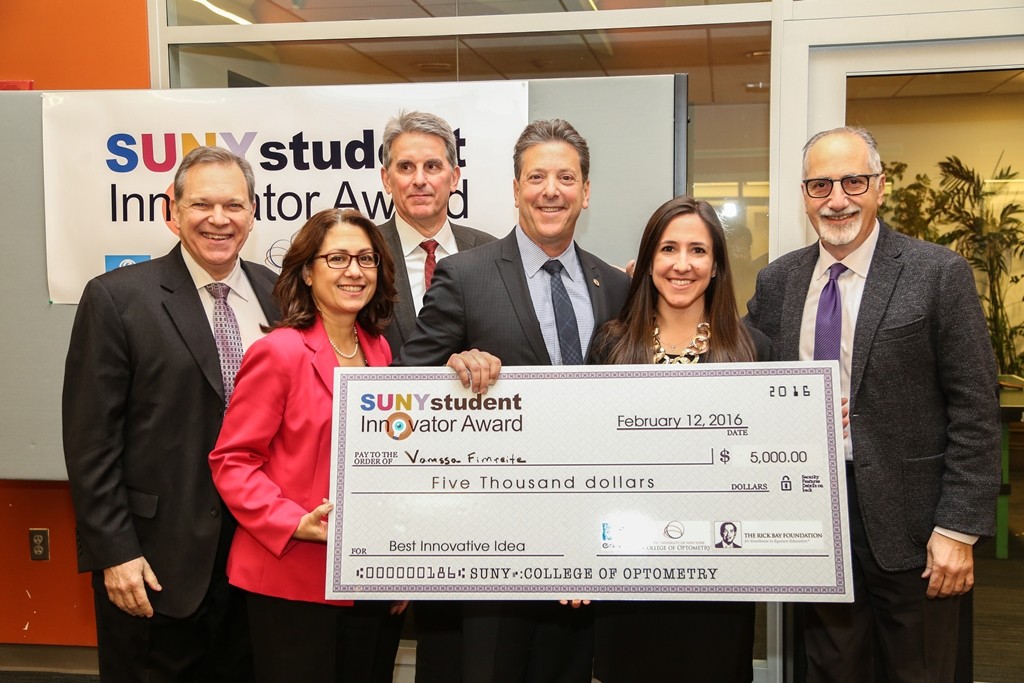 Fourth-Year OD student at the SUNY College of Optometry, Vanessa Fimreite, is the first recipient of the SUNY Student Innovator Award. The $5,000 award, which is sponsored by Essilor of America, Jobson’s Rick Bay Foundation and the College, is designed to reward an original concept developed by a SUNY Optometry student that is impactful, viable, and feasible in today’s optometric practice.

Fimreite’s winning idea, MAVA: Mobile Acuity and Vision Assessment, a digital vision test suitable for young children, was presented for the first time publicly to the attendees at this year’s VM Global Leadership Summit on April 13.

“Jobson’s Rick Bay Foundation is thrilled to be able to work with Essilor and the SUNY College of Optometry in awarding the first SUNY Student Innovator Award,” said Marc Ferrara, CEO, Information Services for Jobson Medical Information. “The Student Innovator Award program is a unique partnership which will encourage the next generation of optometry to bring impactful, innovative ideas to the profession and our industry.”

These initial submissions were judged by a committee made up of SUNY Optometry faculty and administration and a short list of five innovations were chosen last December. Then, a judging panel made up of Mr. Ferrara, Dr. Howard Purcell, senior vice president of customer development at Essilor of America, Inc., as well as SUNY Optometry’s Dr. Richard Madonna, professor and chair of Clinical Education, Ms. Liduvina Martinez-Gonzalez, vice president for clinical administration and executive director of the University Eye Center and Dr. David Troilo, vice president and dean for academic affairs, was put together to view the presentations on February 12. After the presentations were completed, the judges convened to pick a winner which they announced during a reception after the event.

In addition to Fimreite’s winning innovation, third-year OD student, Michael Wallerich was invited by Dr. Purcell to pitch his unique idea to Essilor’s research and development team in Dallas.

“One of our goals at the College is to nurture a strong intellectual curiosity and entrepreneurial spirit in our students,” said SUNY Optometry President David A. Heath. “This event really helped to bring out those qualities. I was very impressed by the innovations that our students presented, and I look forward to seeing what ideas our students develop in the years to come.”