Showcasing the Power of SUNY to Our Nation’s Leaders 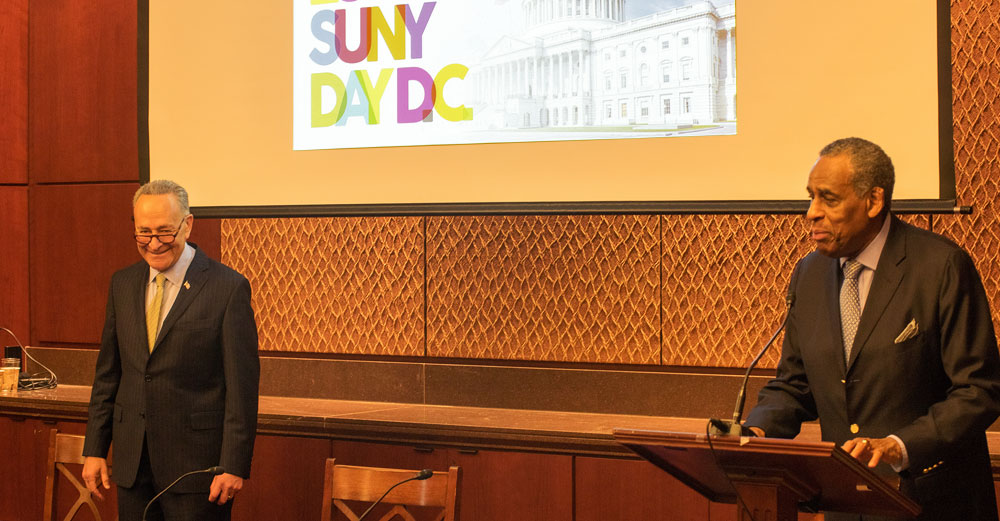 As the largest public university system in the United States, The State University of New York often leverages its scale to weigh in on issues of importance to the higher education sector nationally. To further those efforts, each spring senior administrators from across the SUNY system visit Washington DC to advocate for our students, faculty, and campus communities. The goal of “SUNY Day DC” is to both showcase and enhance the system’s ability to deliver high-quality, affordable education to everyone in New York State.

For the first time ever, students and research faculty were invited to join in this invaluable learning experience and get the chance to network with Members of Congress and their staffs and DC-based SUNY alumni. In conversations with elected representatives and staff, SUNY students and leaders advocated for campus safety and student financial aid issues, including increased support for and flexibility in the Pell Grant program, which is critical to ensuring affordability for more than 40 percent of SUNY’s students. More than 40 students received advocacy training before embarking on an afternoon of meetings on Capitol Hill, which involved discussing SUNY’s top federal priorities with Representatives and staff from fifteen congressional offices. 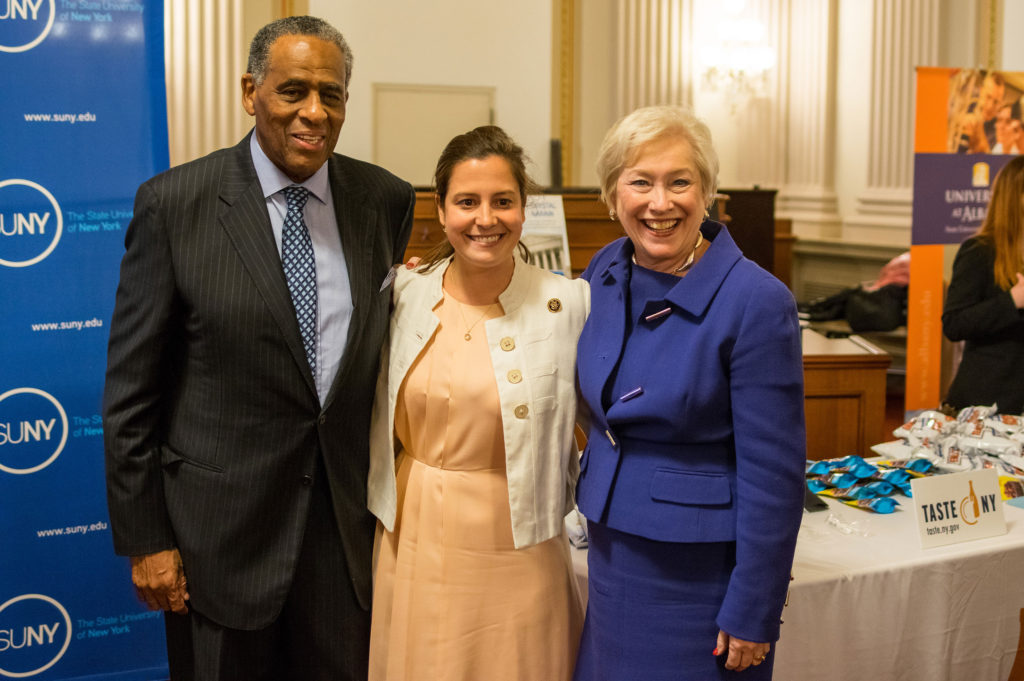 The highlight of SUNY Day each year is the Congressional & Alumni Reception, at which this year, nearly 20 campuses and campus foundations created displays around the theme of “Showcasing our Students and Faculty.” More than 200 SUNY alumni attended, and Congresswoman Elise Stefanik (NY-21) served as host, taking time to speak about her sponsorship of legislation that will ensure that flexibility in Pell Grant awards better reflect the needs of today’s students. Schenectady County Community College, for the second year in a row, pleased the crowd by bringing treats from their culinary program, including peperonata crostini and petit fours. 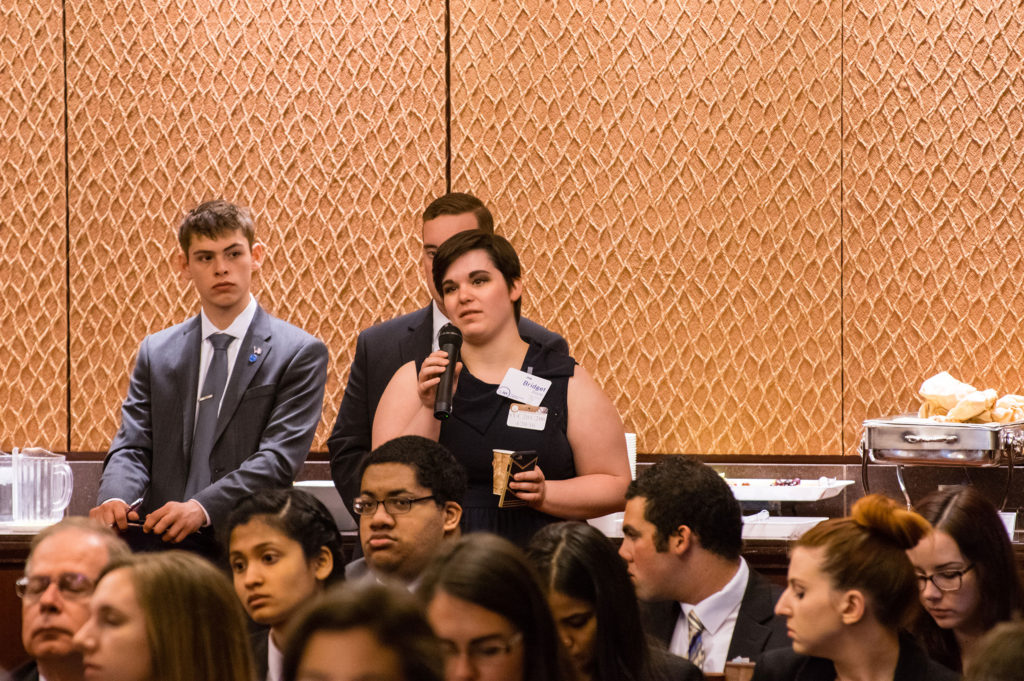 In addition to exciting networking events, a full slate of programming occurred through the event, which began with opening remarks by UAlbany ’01 alum, Congressman Lee Zeldin. Attendees also had the opportunity to hear from alumni with exciting careers in Washington: Brittany Wright, Cortland ’09 alum and Director of Graduate Admissions & Enrollment Management at The George Washington University; Elizabeth (Liz) Allen (Geneseo ’02), White House Deputy Communications Director and Deputy Assistant to the President; Joel Packer (Binghamton ’75), Executive Director of The Committee for Educational Funding; and Aaron Washington (Fredonia ’08, UAlbany ’09), Management & Program Analyst for the U.S. Department of Education.

The alumni were living proof of the Power of SUNY. When asked how she achieved her position in the White House, Liz Allen replied “never underestimate the power of the SUNY network.” When she was looking for an entry into public work, she started with an attempt to find work at the Democratic National Convention in Denver. She finally got that chance when her resume was noticed by a fellow SUNY Geneseo graduate. 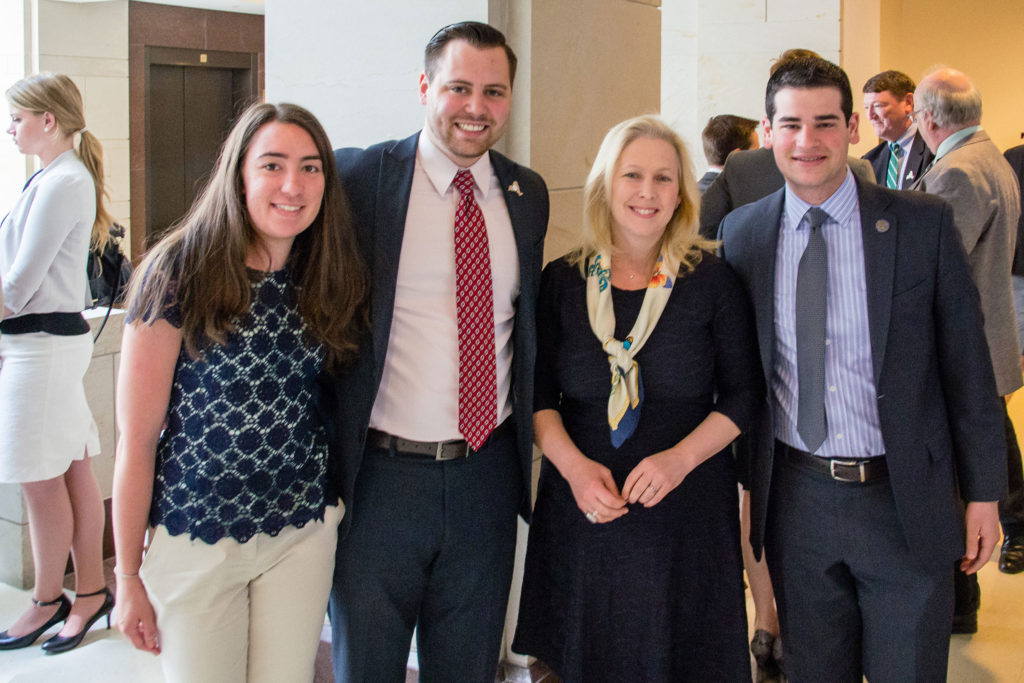 The program wrapped up with closing remarks from New York Senators Kirsten Gillibrand and Chuck Schumer. Gillibrand was first to speak, offering praise on SUNY’s efforts to improve campus safety and thanks for being supporters of her Campus Accountability & Safety Act, which seeks to to protect students and boost accountability and transparency of sexual assault at colleges and universities.

Senator Schumer lauded SUNY as “the crown jewel of New York State.” He spoke about a quality education being vital to success in the new economy, and the important role SUNY plays in meeting that need for students. And, just as student and SUNY leaders advocated for earlier, he stated his desire to make college more affordable through improved loan programs and the ability for graduates to easily refinance student loans to more affordable rates.

“It isn’t every day that students have the opportunity to advocate at our nation’s Capitol,” said Tom Mastro, President of the SUNY Student Assembly. “We had over 40 students attend meetings with New York’s congressional delegation talking about the importance of campus safety, sexual violence prevention, and student debt. I was proud to stand with these incredible student leaders in voicing the needs of our unique campuses.”

Nicholas Simons, the Student Assembly’s Director of Legislative Affairs, played a large role in event logistics and recruiting student fellows to attend. “Having the opportunity to engage in workshops and panel discussions surrounding federal loans, work study, and the state of our nation’s education policies was intriguing,” he said. “We heard first hand from our Senators and Representatives about what they are doing to make college more affordable, and keep our campuses safe.”

All in all, the 2016 SUNY Day in Washington DC was a great event that gave SUNY students and campus leaders the ability to showcase the Power of SUNY to our partners in federal government.

View a collection of photos from the event in our Facebook gallery.