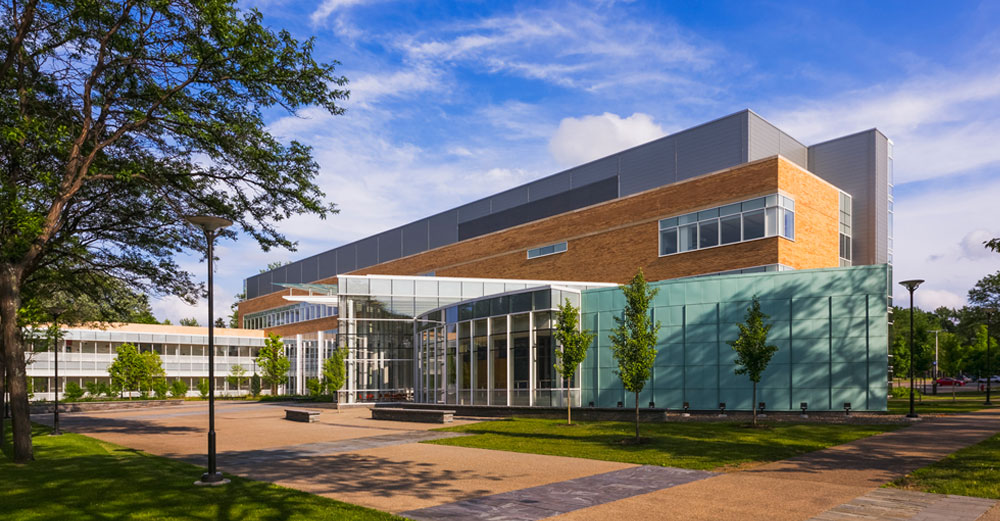 Since its inception in 1970, Earth Day has been held annually on April 22 to celebrate the importance of preserving our environment and encouraging sustainable living practices. It’s been a long journey full of rallies, protests, and political advocacy, but the world has come a long way in the past 46 years towards creating a cleaner, safer place to live for the over 7 billion people on Earth. The largest takeaway: every little bit counts. Every water bottle recycled, every tree planted, matters. That is what Earth Day is about, the little things amounting to something greater.

To help do our part in New York State, many schools within the SUNY system have been working hard to help contribute to the cause. As the largest public university system in the country, our campuses collectively strive to be the “greenest” higher education system in America.

System wide, SUNY takes sustainability seriously. The university system is one of the state’s largest consumers of energy, and plans to reduce non-renewable energy consumption 30 percent by 2020. With over 459,000 current students enrolled, its important to remind people of the environmental effects of consuming resources, over population, deforestation, climate change, and other pressing issues.

At a campus level, SUNY is just as committed. Colleges and universities across the country have signed a White House American Campuses Act on Climate Pledge, demonstrating their commitment to carrying out their own sustainability goals and supporting strong action on climate change by world leaders. All of our SUNY campuses have joined this pledge to bring action on climate change and increase sustainability efforts across the country, which makes the system nearly 20 percent of the participating campuses. Last October, Governor Cuomo pledged to bring renewable energy to every SUNY campus by 2020. Additionally, Cuomo announced the creation of a Clean Energy Opportunity Training Program, through which $15 million will be awarded to train SUNY workers in solar technology and instillation.

As a state-wide, university driven initiative, a few schools have gone above and beyond with their efforts of environmental conservation. On this year’s Earth Day, we recognize these institution’s achievements.

In 2013, SUNY Geneseo was one of ten campuses to receive a grant from SUNY’s Small Grant Sustainability Competition to support the Energy-Smart New York initiative. Geneseo’s grant helped create the Energy Garden, affectionately nicknamed eGarden, as a “stand-alone, off the grid energy garden that will generate energy using renewable resources such as wind, solar energy, geothermal systems and bio-fuels.”

Three years later the eGarden has done that and much more. Not only has the eGarden been decreasing energy consumption and landfill waste, but it has also installed solar panels which power an eco-dorm, a bioconversion green house and the school’s Center for Inquiry, Discovery, and Leadership. The eGarden is also available to SUNY Brockport, Monroe Community College, Finger Lakes Community College and Genesee Community College students and faculty. 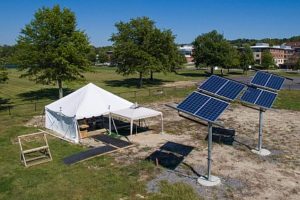 The eGarden’s solar panels soak up some sun.

“It’s a great resource for the community,” said Carol Long, Geneseo’s Provost and Vice President of Academic Affairs. “It can work with local businesses who work in the alternative energy field; it can give them a chance to showcase their work and give us a chance to work with them. It can also give community members a chance to learn about renewable energy.”

Support for the initiative has grown over the years, as Campus Auxiliary Services put up $85,000 to buy a barn for the eGarden to store necessary equipment and compost waste from the dining halls. Along with the barn, the eGarden plans to install a wind turbine.

Physics professor Stephen Padalino, one of the major contributors to the eGarden, believes student’s education is the core benefit of the initiative.

“The most important thing is to educate students that they can live a life that contributes to sustainability,” said Padalino.

Dozens of students on campus have taken advantage of the eGarden’s educational resources. Some have created two arrays of solar panels that track the sun during the day to achieve the maximum ray absorption. Others have created two plastic covered wooden boxes, one filled with soda cans, the other filled with metal gutters, to see which better absorbs heat from the sunlight. Two students have worked on a project involving a battery-powered golf cart that will instead be powered by a solar panel. Future projects include the development of micro-algae in plastic ponds for biofuel conversion.

The eGarden had demonstrated to be an extremely positive force for Geneseo students, as well as the surrounding community. For those interested in sharing more ideas for this exciting and developing project, check out the Geneseo Sustainability Commission.

The College of Environmental Forestry and Sciences has degree specific majors in Bioprocess Engineering, Conservation Biology, Environmental Resource Engineering, Sustainable Energy Management, and many other related fields of study. ESF is one of the leading universities in the nation on the forefront of tackling environmental challenges. In addition to academic studies, ESF has an Office of Energy and Sustainability, Green Campus Initiative club, and has set forth several projects under an initiative called “Sustainability in Action” on the campus. 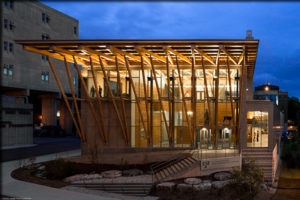 One of such projects is ESF’s Rain Garden, also called a bioretention basin, which catches and holds storm water runoff to promote better water infiltration to the ground and evaporation into the atmosphere. Students use the rain garden to measure water flow rates, soil temperature and moisture probes to compile climate data to optimize the natural water cycle.

Located on Walters Hall, ESF’s Green Roof is composed of sod and thatching, and helps regulate temperature while cooling the building in the summer and insulating in the winter. Green roofs also minimize runoff and reduce storm water entering sewers by 80 percent. They also serve as a great means of filtering pollutants and carbon dioxide out of the air.

ESF also has photovoltaic installations on Walters Hall and Baker Laboratory. Photovaltaic cells are a major source of solar energy, which produce an electrical current when exposed to sunlight. The cells, which are made up of layers, form a semi-impermeable electric field which creates a clean energy collection process and no combustion causing pollution. ESF’s photovaltaic cells are the first generation of cells made of silicon.

As mentioned earlier, ESF’s newly constructed Gateway Center, a student hub for studying and socializing, is a high-performance sustainable building. The Gateway Center, which is Platinum LEED certified, has a combined heat-and-power system (CHP), made of two complimentary components. A biomass-based system produces high pressure steam to generate electricity to heat buildings, while three natural gas-fired microturbines provide a balance of electricity and steam for heating. The CHP system provided for by the Gateway Center meets 65 percent of campus heating needs, 20 percent of electrical needs and has reduced the campus wide carbon footprint by 22 percent.

Not surprisingly, these are only few of many sustainability initiatives going on at ESF. Students majoring in environmental related studies engage in research each year towards bettering the Earth.

In addition to projects such as the eGarden and Sustainability in Action, several SUNY schools also offer degree specific programs in the technologies that create renewable energies. One such school is Clinton Community College, which has a two year degree program in Wind Energy and Turbine Technology. For the hundreds of wind turbines in Clinton County, every 10 requires at least 2 wind turbine technicians to maintain and operate them. The degree provides students of Clinton with job ready skills and intensive training to help maintain these turbines. 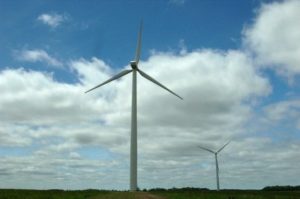 An average wind turbine can produce more than 6 million kWh in a year.

Wind turbines have become a popular source of renewable energy within the past decade, deriving electricity from wind as their blades spin. According to the Office of Energy Efficiency and Renewable Energy, wind is a form of solar energy as a result of uneven heating of the atmosphere by the sun, the irregularities of the Earth’s surface, and the rotation of the Earth. Flashing back to Physics 101, the wind turbines turn kinetic energy from the wind into mechanical power. The result can be used to grind grain or pump water on farms, but can also be converted into electricity.

Recently, developer Invenergy proposed the construction of 50 to 100 more wind turbines in Clinton County. Although the project is still in its early stages, it will increase demand for those with knowledge and degrees in this type of technology. The project is expected to create 200 temporary jobs during construction and 10 to 12 permanent jobs in turbine maintenance.

By 2030, The Global Wind Energy Outlook estimates that energy produced by wind turbines will offset 2.5 billion tons per year of carbon dioxide. Comparatively, this is the equivalent of not using 4.6 billion barrels of oil annually.

In addition, Clinton also offers a two year program in Renewable Energy Technologies. Much like that of the wind energy program, students are prepared for employment in areas of constructing, installing, and maintaining solar and wind renewable energy. Much like that at ESF, studies also include photovalaic systems and electrical power deliver systems.

Providing students with hands on experience in renewable technologies is a crucial step in creating an environmentally conscience workforce.

At SUNY, students, faculty, and alumni have the resources to engage in actions that can help the environment in immeasurable ways. From wind turbines to green roofs, to simply throwing your water bottle in the recycling bin, we can all celebrate Earth Day this year knowing that we’ve helped make a difference.