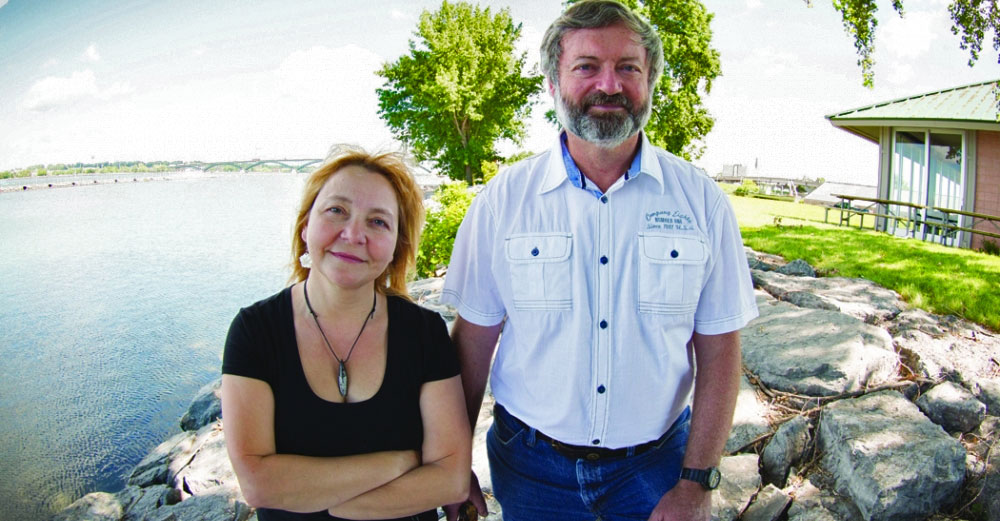 A scientist from Minsk, Belarus, got off the bus in Madison, Wisconsin, one cold, slushy night in March 1994. No one was waiting for him. “I was trying to decide what tree to sleep under,” said Alexander Karatayev. “I only waited 15 minutes or so—but it was a very long 15 minutes.”

Karatayev, now the director of the Great Lakes Center at Buffalo State, had been invited to Madison to attend a scientific conference on zebra mussels. The harmless-looking mollusk, no bigger than a fingernail, was threatening the ecosystems of the Great Lakes of North America.

At Belarusian State University in Minsk, Karatayev had spent almost 20 years studying zebra mussels, which had established themselves in Belarusian waters in the 1800s. With 50 published research papers, Karatayev was one of the world’s foremost experts on zebra mussels.

The conference planners who had invited Karatayev told him they would pay for everything. “They said I just had to pay for the flight,” he recalled. “But I was making 20 dollars a month!” He obtained a grant from the Open Society Foundation, established by multibillionaire George Soros, that covered most of the airfare, although he did have to resort to bus travel for the last leg of his journey.

Karatayev invited everyone he met in Madison to his home in Belarus the following year for a zoological conference in Minsk. Three scientists took him up on it. “We only had a one-bedroom apartment,” said Karatayev. “It was cozy, but everybody got along.”

In Minsk, Karatayev’s wife, Lyubov Burlakova, joined the conversation. Burlakova, who had trained in biophysics, had shifted her focus to aquatic biology after meeting Karatayev. In 1992, they published their first paper together, discussing the feeding modalities of various aquatic species in Lake Lukomskoe in Belarus before and after zebra mussels were introduced. This was among the works they wanted to share with their North American colleagues.

“But all our papers were in Russian,” said Karatayev, “and very few North Americans had any access to them.” From then on, they decided to publish their work in English. Both Karatayev and Burlakova could read scientific papers in English, although neither knew enough conversational English even to “ask how much something cost at a store,” according to Karatayev.

Dianna Padilla, now professor of ecology and evolution at Stony Brook University, was one of the three scientists who traveled to Belarus. She was trying to synthesize the existing information about zebra mussels. Burlakova said, “We showed her a large, detailed database on Belarusian lakes showing which had zebra mussels and which did not. We had established several parameters that could predict the likelihood of zebra mussel invasion and success, including calcium levels and pH.”

Padilla and her colleagues obtained funding to bring Karatayev and Burlakova to the United States in 1996 and again in 1997 with the goal of making their research available to North American scientists. The resulting articles, “The Effects of Dreissena polymorpha (Pallas) Invasion on Aquatic Communities in Eastern Europe” and “Physical Factors That Limit the Distribution and Abundance of Dreissena polymorpha (Pall.),” were published in the Journal of Shellfish Research in 1997 and 1998.

As collaboration grew between Karatayev and Burlakova and their American counterparts, the couple considered moving to the United States. “Sometimes we would list pros and cons,” said Karatayev, “and they would come out equal.” Finally, what tipped the scale was the science. “It was almost impossible to do research and publish our work internationally from Minsk,” said Karatayev, “and there were only a few journals in our field in Eastern Europe.” In America, they could discover more, learn more, and publish more.

Their reputations grew. The couple conducted the first major statewide survey of freshwater lakes and rivers in Texas to create an inventory of existing species of freshwater mussels, a project that continues to this day with funding from the U.S. Fish and Wildlife Service and Texas Parks and Wildlife Department.

After holding other positions in the States, Karatayev applied to the Great Lakes Center for the position of director in 2007 and was hired. Under his guidance, the center’s emphasis is on research and fieldwork, and both he and Burlakova are doing more hands-on science.

“Broadly speaking, we have two main goals,” said Karatayev. “We want the Great Lakes Center to become well known nationally in freshwater research. Because we can’t compete successfully with major research universities, we want to collaborate with them as a valued partner.”

Such partnerships are booming at the center. Funded by $9.2 million in grants, current projects include Great Lakes long-term monitoring; investigating lake sturgeon in the Lower Niagara River; emerald shiner habitat in the Upper Niagara River; early detection of invasive fish in the Great Lakes; and conservation of native freshwater mussels in Great Lakes coastal zones.

Their second goal is to have a positive impact on the Western New York region. Great Lakes Center research scientists, affiliates at Buffalo State, and collaborators from other institutions bring diverse areas of expertise to the Great Lakes. Such expertise enables scientists to provide policymakers with information, which in turn promotes more informed decisions about ways to protect water quality, support the survival of native species, manage nuisance invasive species, monitor carcinogens in the food web, and many more.

The Great Lakes Center has a bright future ahead as it continues to provide leadership and research in areas that will ultimately save and sustain the Great Lakes and their watersheds. As an anchor institution in Buffalo, the Buffalo State Great Lakes Center expands SUNY’s community reach beyond people, places, and land within our boundaries into the waterways that surround the Queen City.