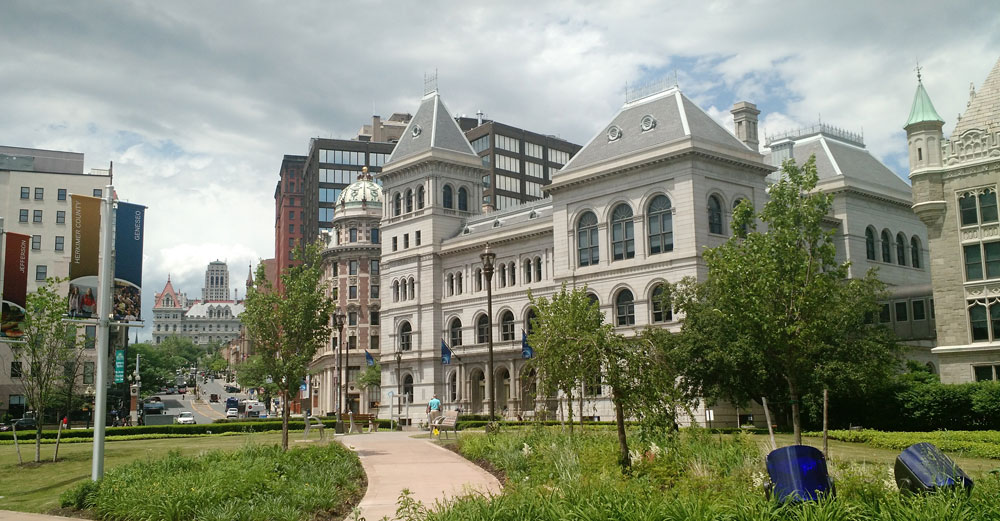 When Chancellor Nancy Zimpher envisioned a strategic plan for SUNY seven years ago, she knew that building relationships with local communities would be a stand-out part of the strategy. And so, “SUNY and the Vibrant Community” became one of the guiding six “Big Ideas” of the system’s plan to elevate itself—to become New York’s biggest, most reliable economic and quality-of life driver.

With 64 campuses in every region of the state, 460,000 students, and 88,000 employees, SUNY makes its mark wherever it is—and that includes downtown Albany, home of the system’s headquarters.

SUNY System Administration is the largest employer in downtown Albany. As such, Chancellor Zimpher saw SUNY’s strong presence in the capital city as both a responsibility and an opportunity.

“One of the first things you see when you come to Albany is the castle on the river,” Chancellor Zimpher said, referencing historic SUNY Plaza, built between 1914 and 1918 as the headquarters for the Delaware & Hudson Railroad and the Albany Evening Journal newspaper. “It’s breathtaking, one of the most beautiful buildings in the country, and it begs you to learn more about it.”

The allure of the building sparks the interest of thousands of people who visit Albany for work or leisure each week and who are drawn to the building, which, because of its high, Flemish Gothic style, is often confused with the New York State Capitol, located just up the hill. 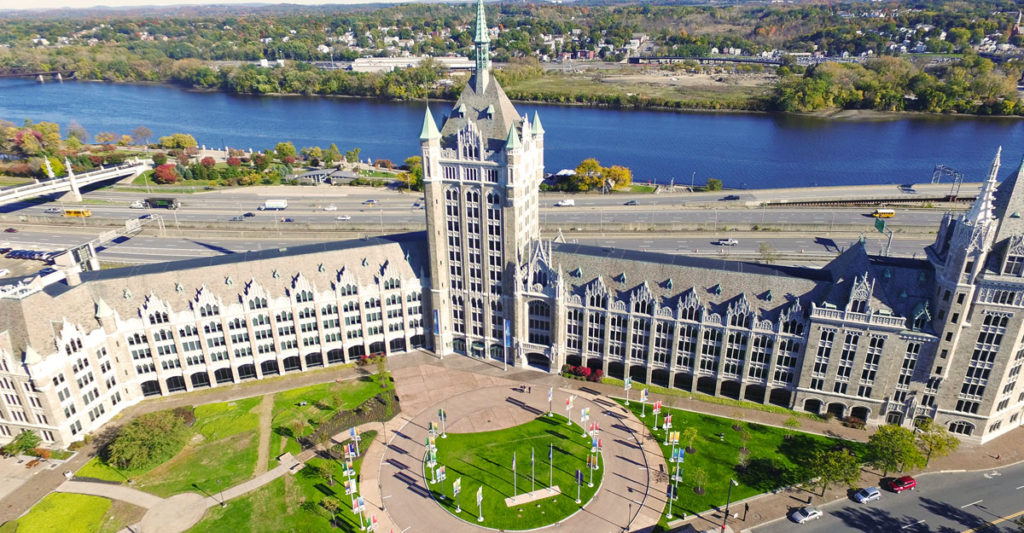 However, for all its towered, sculpted beauty, SUNY Plaza was, until recently, cut off from the neighborhood around it. Decades-old landscaping created a barrier that made the building and the large triangle of grass and trees in front of it unapproachable. So as part of her commitment to stoking community vibrancy wherever SUNY is, Chancellor Zimpher saw fit to change it. In the last two years, while making repairs to underground infrastructure and lighting, SUNY redesigned the plaza entrance to make it both accessible and welcoming, to better integrate it into the city’s streetscape.

“This remarkable building belongs to SUNY and the people of New York, but it also belongs to Albany,” Chancellor Zimpher said. “We want the people who work and live downtown, who visit, to know that, to feel it.”

In conjunction with the renovations, SUNY now hosts a year-round weekly farmers’ market, held outside in the warm months and in the building’s first-floor gallery in winter. In the three years it’s been at SUNY, the market has grown season by season and now includes more than 20 vendors, and attracts hundreds of patrons every Thursday. This summer, in partnership with the Downtown Business Improvement District, SUNY is also hosting free yoga on the plaza lawn, open to any and all who want to join.

“When I think of downtown Albany I think of something Jane Jacobs wrote,” Chancellor Zimpher said of the late urban theorist. “She said you can’t rely on bringing people downtown; you have to put them there.”

Put them there, she has. Not only does SUNY host community events, but this year, the offices of SUNY Press moved from a suburban office park to downtown Albany, as have the offices for the SUNY-run Small Business Development Corporation. In total, in 2016 SUNY added 75 staffers downtown.

Recognizing the drive to revitalize a neighborhood 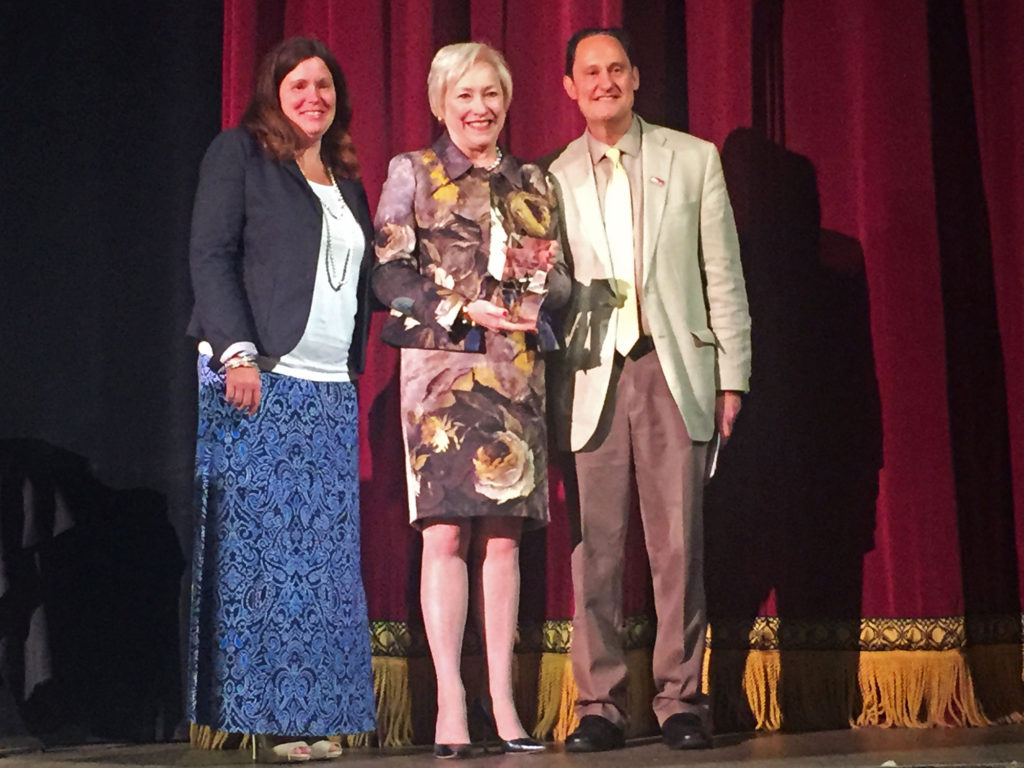 Chancellor Zimpher receives the James M. DiNapoli Award from outgoing Downtown BID Board President Brad Rosenstein and Executive Director Georgette Steffens. The prize is given each year by the Downtown Business Improvement District to individuals who build partnerships that vitalize downtown Albany.

The plaza redesign, farmers’ market, and relocation of SUNY employees to downtown are just three of the projects spearheaded by Zimpher that are examples of why the Downtown BID selected her as the recipient of this year’s James DiNapoli Award. The award is given each year to an organization or individual in downtown Albany who exhibits prowess in forming partnerships that drive neighborhood revitalization. This year’s event, held at the Palace Theater, opened with remarks from Lt. Governor Kathy Hochul and Albany Mayor Kathy Sheehan.

Forming partnerships to drive change is something Chancellor Zimpher knows a lot about. As the co-founder of Strive Together, she has harnessed the collective-impact theory of action to seal stubborn leaks in the education pipeline, from cradle to career. In Albany, she was the founding convener of the city’s collective-impact effort, The Albany Promise.

“Everyone in a community—not just teachers and parents and principals—has a stake in how students do in school, from kindergarten all the way through to college,” Zimpher said. “It’s on every community, all leaders, all stakeholders from across sectors, to come together, to look at where their students aren’t succeeding, and to work together toward solving those problems.”

In downtown Albany, Chancellor Zimpher is also applying the collective-impact approach to economic and cultural revitalization. She serves on the board of the city’s economic development arm, Capitalize Albany Corporation, and at SUNY System Administration she’s assembled a Downtown Task Force made up of System staff members from across departments who are active in the community and understand the city’s dynamic and needs.

Under Chancellor Zimpher’s leadership, SUNY is also a founding institutional member of the City of Albany’s Heritage Tourism Partnership. 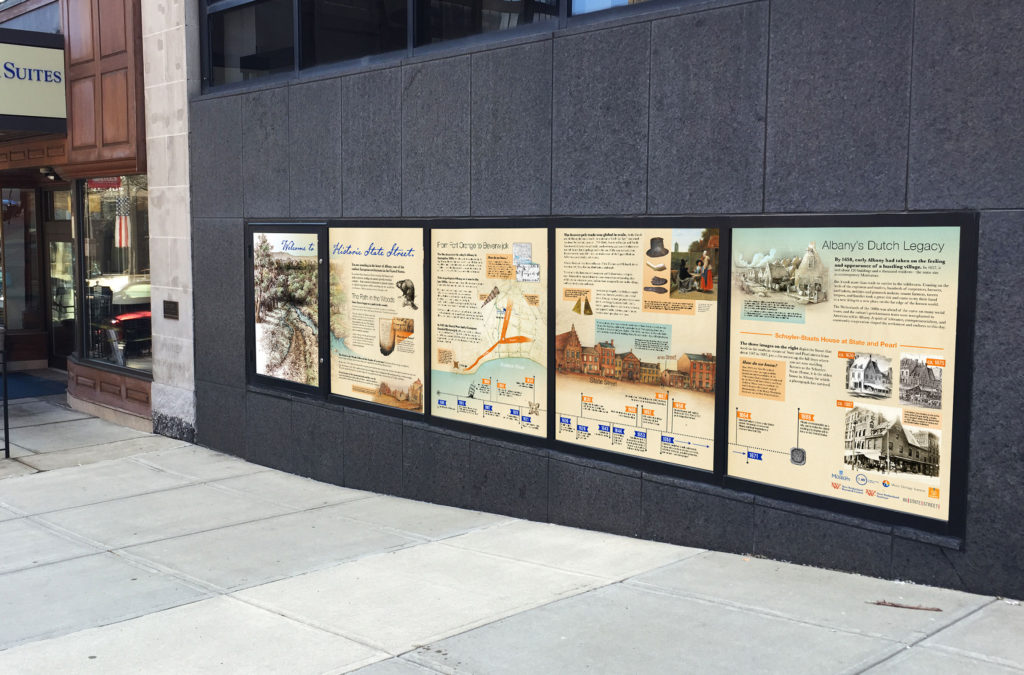 This large window display on State Street in Albany tells the story of the capital city’s settlement by the Dutch in the early 1600s. The panel was created through the creative partnership of SUNY, the NYS Museum, Downtown BID, New Netherland Research Center, and many others.

“This isn’t so much about tourism as it is about placemaking,” Chancellor Zimpher said. “If you define a place, lift up what’s best about it, what’s unique, the tourism—and the economic development that comes with it—will follow. Albany’s got everything it needs to make that happen. It’s only a matter of getting our act together and seeing it as a group effort.”

As SUNY’s first project with the Partnership, together with the New York State Museum, Downtown BID, the New Netherland Research Center, and many others, a group created a large window display on State Street, about a block from System headquarters. The display tells the story of Albany’s Dutch roots, dating to 1609—making it the oldest permanent European settlement north of Virginia—and the city’s role in the nation’s founding.

Later this summer an additional 13 similarly designed signs will be installed in the heart of downtown Albany, highlighting the city’s historical assets. SUNY is also a sponsor of the Downtown BID’s summertime event, Fork in the Road, a monthly celebration in Tricentennial Park, a block from SUNY Plaza, designed to spur community building downtown after hours, with food trucks, live music, and other vendors.

“If, like me, you’re not from Albany, you might not know a lot about it,” Zimpher said. “But there’s a long, rich history here—one of national significance—and it needs to be told. In a lot of ways, the story of Albany is the story of America. This was North America’s first melting pot. SUNY is thrilled to help tell that story, to make sure people walking these old streets know they’re someplace special.”

“Downtown Albany is small, and SUNY takes up a lot of it,” Chancellor Zimpher said. “It’s our responsibility, and our pleasure, to be good neighbors, great partners, and leaders in this community.”