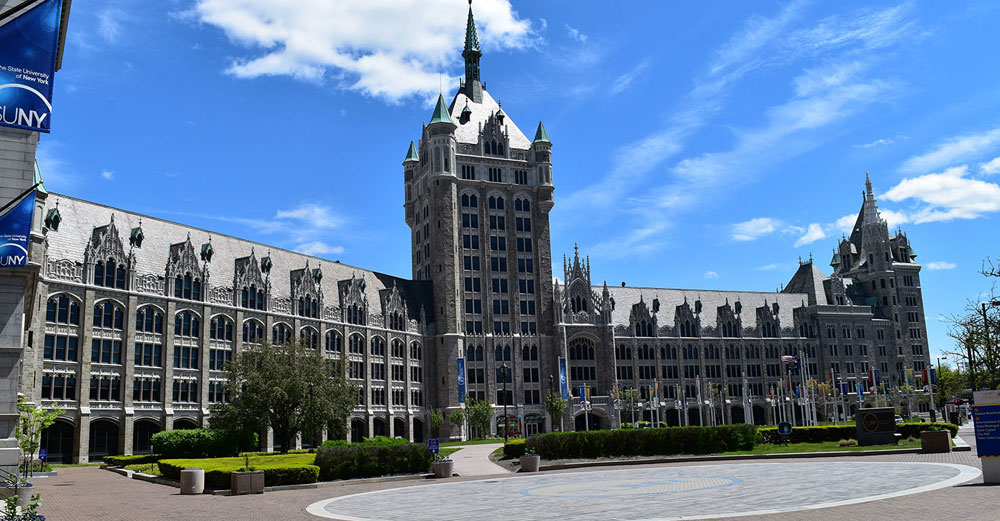 Both a landmark and home to the administrative end of the SUNY System, the D&H Building in downtown Albany, or our own SUNY Plaza, is a sight to behold. From the gothic architecture to the scale of the building and its towers, the building is a cornerstone of the downtown Albany landscape. And there is a history to this property that is quite long and very interesting. Our beautiful plaza building has only belonged to SUNY for 35 years, but this week we’re celebrating 100 years in which the building has been an Albany icon.

It’s #SUNYweek in #Albany! Our friends at @CiderBellys are making delicious #SUNY doughnuts. Stop in for a snack. pic.twitter.com/ghd8OEmHC3

SUNY Week will celebrate the SUNY Plaza building’s 100th birthday with events and community partnerships. Businesses in downtown Albany are offering special treats to signify the milestone and our Morrisville State College is helping us celebrate by making their own special SUNY Blue ice cream!

Whether or not you’ll be in downtown Albany to celebrate with us, you can participate in SUNY Week all the same by learning about the history of the plaza building with these fun facts we’ve compiled.

Without further ado, read up on the some interesting history of SUNY Plaza. Did you know:

1. The State University of New York, founded in 1948, took possession of the Delaware & Hudson Railroad Building as its system headquarters in 1972 and moved to the space in 1977 after interior renovations.

2. Though officially deemed SUNY Plaza since that time, the building is often referred to by the locals as the “D&H Building,” or, affectionately, “The Castle.”

3. Often mistaken for the State Capitol because of its grandeur, SUNY Plaza is the masterpiece of Marcus T. Reynolds (1869-1937), Albany’s most important architect of the late 19th and early 20th centuries.

4. Designed in a Flemish Gothic style, the building commemorates the original Dutch settlement of the City of Albany.

5. Though SUNY Plaza presents as a cohesive whole, the building or buildings were actually constructed in six main parts between 1914 and 1918.

6. The initial portion of the complex, built in 1914-1915, includes the five-story block at the north end and the thirteen-story tower, connected by the long five-story diagonal wing. Another five-story wing was constructed in 1915-1918, south of the central tower. (A concrete freight house located at the north end, behind the Federal Building, was part of the original construction but has since been demolished.)

7. At the south end, a separate but physically connected and visually compatible building was constructed to house the headquarters of the Albany Evening Journal, the newspaper of William Barnes Jr., the powerful Republican political boss of Albany.

8. The photographs and drawings presented in this show are from the collection regularly housed at SUNY Plaza. The photos were taken during the original construction campaign, and many of them are dated.

9. The State University of New York is immensely proud to be the steward of this important heritage and cultural resource.

One thought on “Celebrating 100 Years of an Albany, New York Landmark” 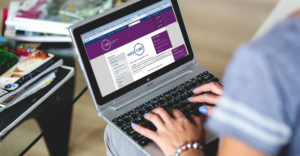 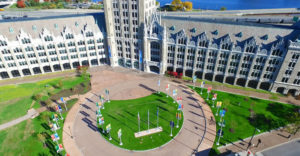 Next post Test Your Knowledge of All Things SUNY

Julie Maio
November 23, 2020November 24, 2020
Prior to the pandemic, an increased need for more healthcare professionals to join the workforce already existed. With the added...
Anissa Williams
February 11, 2020
In our educational experience, students are continuously informed of the importance in immersing themselves with extracurricular activities, enrichment classes, and...
Zach Percy
August 22, 2018August 24, 2018
Making communities a better place in which to live and learn has been a major priority at SUNY for decades....
Taras Kufel
September 5, 2017September 11, 2017
**Update: In this effort, the SUNY Impact Foundation raised more than $30,000 for Hurricane Harvey and future disaster relief. Read...
Big Ideas
June 19, 2017June 19, 2017
[caption id="attachment_33544" align="aligncenter" width="1000"] Two large “scrims” are affixed to 48 Hudson Avenue, or the Van Ostrande-Radliff House, the oldest...
Arthur Ramsay
June 29, 2016July 8, 2016
On Sunday, the SUNY community gathered in Manhattan to march in the 46th Annual New York Pride March for the...