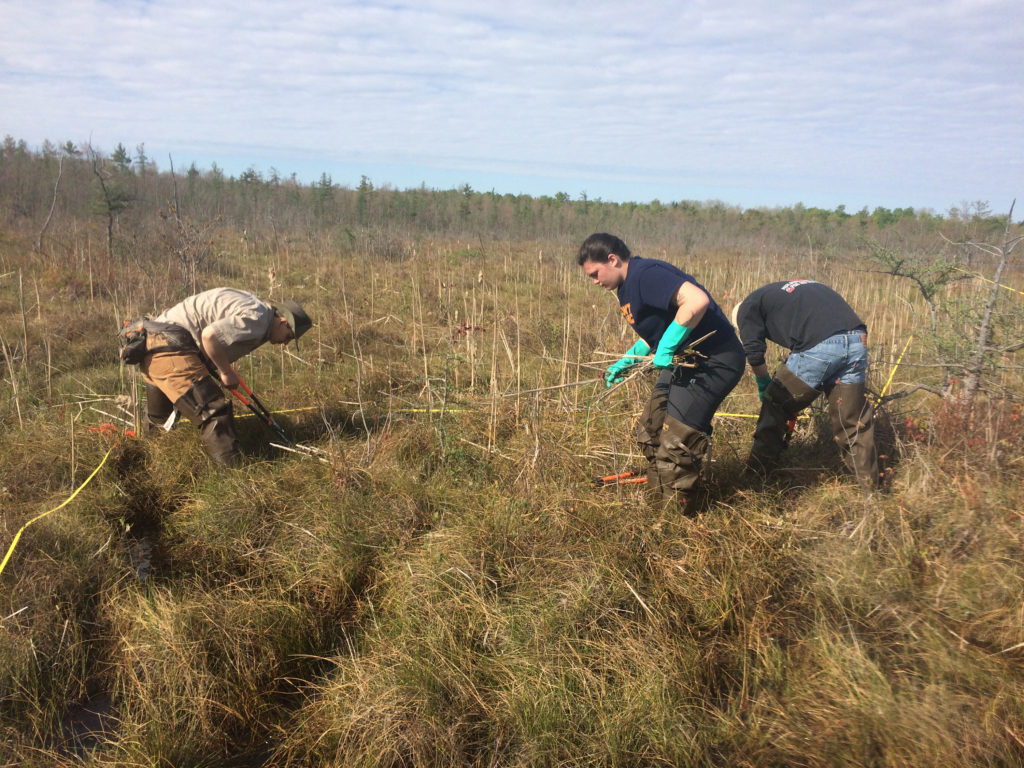 For a small group of SUNY Oswego professors and students, the answer to “what did you do over the summer?” can include “fieldwork to protect the homes of two rare species.”

Rosenbaum, an expert on the bog turtle, said cattails at the site have been “moving in like an advancing army, leaving no room for anything else to grow in between.” The fen likely is the last in Oswego County — and the state — to host a population of the extremely rare bog buckmoth, whose primary host plant is the bog buckbean.

Three years ago, according to Hellquist, it became apparent that research needed to begin on the best method of cattail removal and the most effective time of year to do it, to head off the threat to habitat for the rare animals. With faculty mentoring, students laid out test plots among the cattails and set to work.

“Independent student research and work conducted by the ‘Wetlands Ecology’ class provided the data needed to generate the momentum to obtain the funding,” Hellquist said. “Student data from multiple sources allowed us to quantify the problem.”

“It was pretty hard,” said Charap, a junior zoology major who invested about four weeks on the project and will participate again this fall. “We have to go below the waterline to cut the cattails. But I got to see all these cool plants and animals and learn about the fen.”

Page is on her third year working at the site. Now employed by Applied Ecological Services of Waterloo, she said the students’ enthusiasm has helped motivate her to stick with the project beyond graduation. “I love the team. I think we made good choices with them. They each have (research) topics involving the bog, so I hope we get some more projects out of it,” she said.

With faculty-mentored undergraduate research a vital part of SUNY Oswego’s fabric, Hellquist said, “This is an excellent experience that has conservation implications that students can use for independent study or senior theses.”

Hellquist said students participating in the cattails mitigation project would analyze data and present their findings at a fall conference hosted by Rochester Academy of Science, as well as other academic forums in the future.

As the effort moves forward, he said, students will track the resprouting of cattails and clean up dead biomass to preserve habitat for the bog buckmoth and for the bog turtle, a species that spends as much as 90 percent of its life underground in the mucky soils it prefers.

Rosenbaum, steward of the habitat on behalf of threatened species — including orchids and rare sedges — said cutting back the cattails mitigates but does not fix the primary threat to the fen and other sensitive wetlands. “The real problem is runoff from human activities nearby,” he said.