For Terry Gross, National Conversations of Culture and Politics Stem from Her Time at SUNY 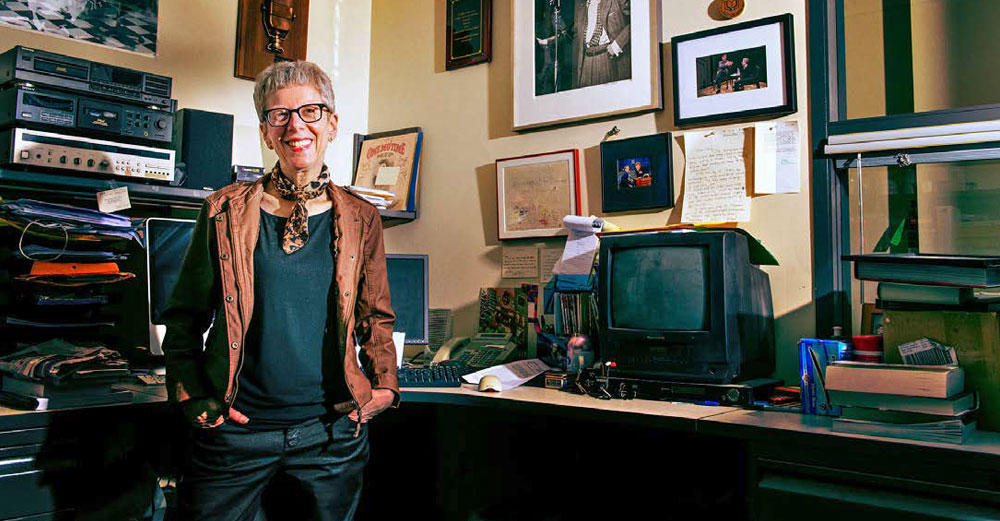 Our media industry is in a boom period now, what with the presidential election and the many other issues present throughout the country that bring us constant reporting, commentary, and more. These media outlets touch on higher education quite frequently, taking a look at performance, cost, and reliability of the college experience for all students. To get a deeper look into the behavior and effects of media reports, the theme of SUNYCON 2016 will question how the media portrayal of higher education shapes the growing belief that higher education is irrelevant and old.

When referring to media, many of us forget that radio reaches 65.2 million millennials a day. As a professional broadcaster, Terry Gross has made a name for herself by conducting welcoming yet provacative interviews with an array of many notable people as host of her NPR show Fresh Air. She has done memorable interviews with individuals like Jack Greenberg, the last attorney who argued the Brown v. Board of Education cases, Jon Stewart, the longtime host of The Daily Show, and Hillary Clinton. Terry has never shied away from a challenging interview. But without SUNY and the University at Buffalo, this beloved radio host may not have taken the career path she did.

Terry Gross, found her passion for radio at the University at Buffalo. But before she became an award-winning radio host, women’s rights activist, and keynote speaker at SUNYCON, she feels that she experienced a career crisis of sorts, like most of us do at some point in college.

How did it all begin?

Terry’s early education helped shape her career goals in a myriad of ways. When asking Terry about her her time at school and the effect it had on her, she told us  “I was an undergraduate at the University at Buffalo from 1968-72—an English major, with a certification to teach. I didn’t particularly want to teach, but had no idea what else I could do with a degree in English—I had already abandoned the idea of becoming a writer, certain that my abilities as a writer would never measure up to the standards I held as a reader. In the fall of 1973, I was given a job teaching English at Genesee Humboldt Junior High, an inner city public school. After six weeks of mayhem, during which I was unable to keep any semblance of order in my classroom, let alone actually teach something to the students, I was fired. Astonished by how swiftly I had failed at my profession, I spent several months earning my living typing. I returned to the University at Buffalo for the fall 1973 semester, to study Communications, and I graduated with an M.ED in 1975.”

Not only did Terry have an academic education, but she received a social education. During her time at UBuffalo, she became aware of political movements and world events going on right around her. Her passion for advocacy arose during college with the anti-war movement. Before her time at school, she had been very studious and grade focused. However, that was all about to change.

“When I got to Buffalo, I was done being studious. I took as many classes as I could pass/fail. You could do that then. My undergraduate years coincided with the height of the counter-cultural and the anti war movements. They also coincided with the renaissance of the women’s movement, and the beginnings of the women’s studies department on campus. The student union became a focal point for both. I saw movies by Godard, Bergman, Fellini, Sergio Leone, and John Waters. The student union also had lounges where you could sit and read, or hang out with friends. I’m pretty sure I once saw Allen Ginsberg there, sitting in a chair, naked. The gym on campus doubled as a concert hall. There I saw Janis Joplin, Frank Zappa and Charles Mingus. For avant garde classical music concerts, I headed to Baird Hall, the home of the music department.”

Terry’s experience was rounded-out not only through her academic studies, but by her social awakening too. What shaped her future passions and career was the eye-opening social and political experiences she had on campus.

As far as the University at Buffalo shaping her career, she says that “after my short-lived teaching career, I stumbled into public radio, and started volunteering at WBFO, the NPR affiliate on the SUNY campus, located in the student union. I started off working on the feminist show, which had the  very 70’s title, Womanpower. The women I worked with were committed to doing consciousness-raising programming and to training other women, like me. At the time, there were few women working in media, and we felt that the women’s movement wasn’t being accurately portrayed in the mass media, and that women’s issues weren’t being adequately covered. I fell in love with radio at WBFO. All I wanted was to find a way to keep doing it. That desire was helped by a graduate assistantship which paid me just enough to quit my typing job and spend more time at the radio station. Of course, I was taking classes, too. The most exciting ones were in the Media Studies department, where I was able to take terrific classes in documentary cinema, experimental film and experimental video.

“I learned how to do interviews, host a show, and record and mix sound at WBFO. I was surprised to find that my years as an English major ended up being useful, after all. Reading and studying literature taught me to put myself in the shoes of the characters whose lives I was reading about, which is similar to what I try to do when I interview a guest. All of the music, movies and literature I was exposed to on campus became the foundation I built on over the years for preparing my arts and culture interviews. The political meetings and protests made me more eager to understand American history, which I continue to explore through interviews with historians.”

Her career as the host of NPR’s Fresh Air was facilitated by her time as an English major. “In my job, I get to talk with the authors of the books I’m reading—as well as the people making the movies and playing the music I love. When Fresh Air is at its best, I feel like we are contributing to the national conversation about culture and politics.”

Looking back on her success

Even with the challenges of preparation, Terry wouldn’t change a thing! With that career path, we wanted to know what advice she would have for other students struggling with career and life choices as well as how to follow a passion.

“When I started in radio, I was a volunteer. No one in their right mind would have hired me then. It was only through volunteering and then living on a modest graduate assistantship that I developed enough experience to be worthy of a paid position. My advice to people starting out would be: if you’re having trouble getting the paid position you want, consider volunteering, doing an internship, or working for little money, if you can afford it—and I realize that’s an option few can afford. It can help get your foot in the door and give you the experience you need to be a more attractive job candidate. I volunteered in public radio and immediately knew I wanted to make it my life’s work.”

Her hard work certainly paid off!

The biggest takeaway from our conversation with Terry was that “At the University at Buffalo, I learned to question—everything. Everything was subject to reconsideration including gender roles, monogamy, religion, sexual orientation, and the very nature of perception. It’s not exactly what my parents thought I’d be getting from my college, but it was an incredible education.”

Her SUNY education allowed her to open her eyes to the world and see it through a lens she never would have thought possible before going to UBuffalo. Terry received an education that gave her the tools to succeed in her career which eventually led to her receiving the National Humanities medal from President Barack Obama. When we asked about her feelings on the award, she said “I can think of no greater honor than getting a medal presented from President Obama. I am hoping that he will come on our show after he leaves office and reflect on his experiences in the White House. It’s a great honor to be recognized by the National Endowment for the Humanities. If the humanities is about the search for meaning in literature, philosophy, religion, history—I’m proud that the work we do on Fresh Air is considered to be a worthy contribution.”

Much like the media crisis with coverage of women’ s issues, higher education has become one of the latest hot topics of mass media coverage. We are looking forward to hearing what Terry has to say about the media portrayal of both issues and how dealing with the women’s issues media crisis has prepared her to deal with the higher education crisis. And any advice she has to offer will be a bonus. Look for Terry at SUNYCON 2016!