No Ordinary Mode of Transportation In This Alum’s Daily Responsibilities 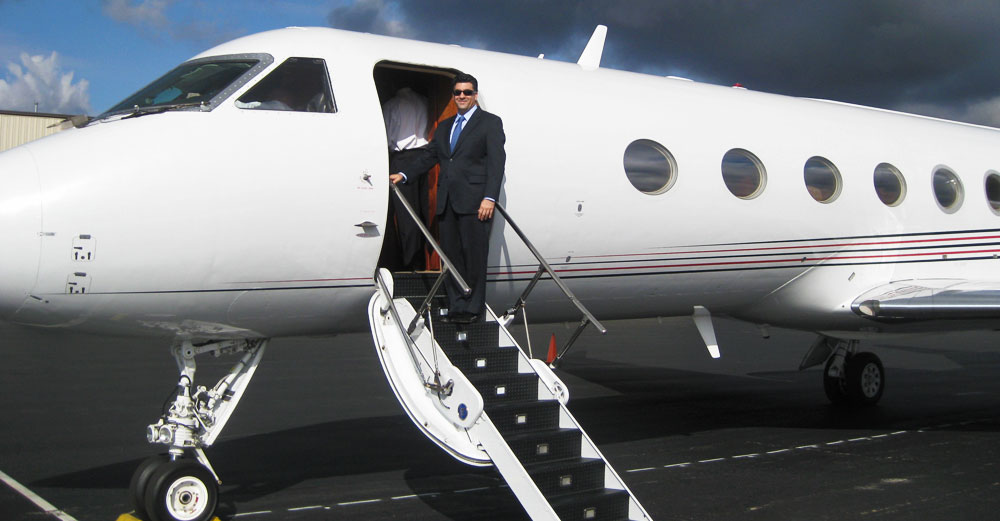 When Farmingdale State College alumnus Philip Prosseda ’86 had an epiphany about becoming a professional pilot, it was at a place in which moments of revelation, clarity and self-awareness are not uncommon. But it was a moment in which faith and career intersected, and in such a place that is not so common.

“I first knew that flying was in my future on April 3, 1981. I was at a church service and I felt the idea of being a pilot was possible for me. In the past I considered a career in aviation for others and not for me,” Prosseda says of that soul-satisfying, life-defining moment. “The idea of flying for a living seemed too good to be true. The thought of getting paid to have fun seemed surreal.”

Now, after more than 27 years in the cockpit and 12,000 hours in the air, Prosseda will testify that his career has indeed been fun, and profitable, and maybe even surreal to some, given the folks who have occupied the seats behind him.

In fact, the short list of those who have flown with Prosseda comprise a virtual “Who’s Who” of the entertainment and corporate worlds: Frank Sinatra, Steven Spielberg, Led Zeppelin, Robert DeNiro, Madonna, Clint Eastwood, Harrison Ford, Tom Petty and top-level executives from Fortune 500 companies such as Time Warner, Morgan Stanley, Cablevision, CBS, MSG and JP Morgan.

And talk about getting your feet wet in a hurry, Prosseda’s first international assignment, in 1991, was ushering Mel Gibson to Germany.

It’s been 35 years since that “hallelujah” went off in Prosseda’s head, and he is at the top of his game. Coming off a V.P. position at a major indie Hollywood studio, he recently joined Executive Jet Management, a Warren Buffet company that is a leader in worldwide private jet charter services and aircraft management. It’s a long way from his AAS in aerospace technology, but Prosseda is quick to confirm that his two years at Farmingdale largely set the course of his career.

“My career has exceeded even my most optimistic vision. At the time, of all the students who wanted to be pilots, half were keen on the airlines and the other half were military minded. I was the only one who wanted to work in corporate aviation.”

Prosseda was already primed to achieve when he arrived at Farmingdale in 1984, having previously taken a prep course for the FAA’s pilot written exam.  He enrolled for the aviation program, but it didn’t hurt that he could drive to school and pay tuition that was affordable. When he arrived, he was wearing his ambition on his sleeve.

“The flight program was for second-year students. In my first year though, I learned that hardly anyone was utilizing the aircraft. I persisted and an exception was made for me. I went on to log over 60 hours at a major discount of $5.00 per hour!”

“I was just an encourager and helped tutor him on some concepts related to aircraft electronics, which no doubt was helpful since he flies highly complex aircraft today. Little did I realize I was watering the seed that would blossom into a rewarding career for him.”

Prosseda got his first big break after graduating from Farmingdale, while he was taking a BS in Aviation Business Studies at St. Francis College.

“During my time in college I worked many jobs to pay for tuition, books, living, and flight lessons. One job I gravitated towards was driving a limo. It allowed me flexibility and the money was good. One of my accounts was Warner Communications and periodically I would drive the flight department manager from JFK to the hangar office. He was a nice, quiet man and would ask me a lot of questions about my career aspirations.

“With the help of the chief pilot I was offered a job as a copilot on the corporate SK-76 helicopter. The idea at the time was to hire a candidate who was hungry and had the right attitude, and then teach him to fly the line.”

The “chief pilot” in the story is Frank Cotroneo, who like Lou Scala has been another of Prosseda’s mentors. In fact, it was Cotroneo – the uncle of a friend – who gave Prosseda his first flight lessons. A former professor in the aviation program at now-defunct Dowling College, Cotroneo is now an instructor at Flight Safety International. Prosseda visits him at his home in Wilmington, Delaware twice a year.

Prosseda was only 23 when he was hired at Warner Communications (now Time Warner), and stayed with the company for eight years.  From there his career went into high gear in the corporate world: contract pilot; chief pilot fixed wing; Director of Aviation for Cablevision (Now Altice USA), where he managed 11 aircraft and 45 people; and Vice President for Flight Operations  for the film studio – a tough gig because he was regularly flying to Hollywood from his home on Long Island.

Now, he believes he’s found his dream job with Executive Jet Management, where he captains the sleek, new Gulfstream G450 on domestic and international flights. And the commute to work is a lot easier, with EJM flying out of White Plains, New York.

But even more impressive than any job he’s held is Prosseda’s flying record: a perfect safety record over 26 years in the cockpit.

“As the industry says, ‘safety is no accident.’ After 27 years of flying professionally, over 35 years in aviation, and more than 12,000 hours without any accidents or incidents, I emphasize safety as a core value and goal in all my experiences.”

And Prosseda is quick to reiterate that it all started at Farmingdale.

“I am fortunate to have gone through years of first-class instruction, and operated the best equipment available. It was my dream.”