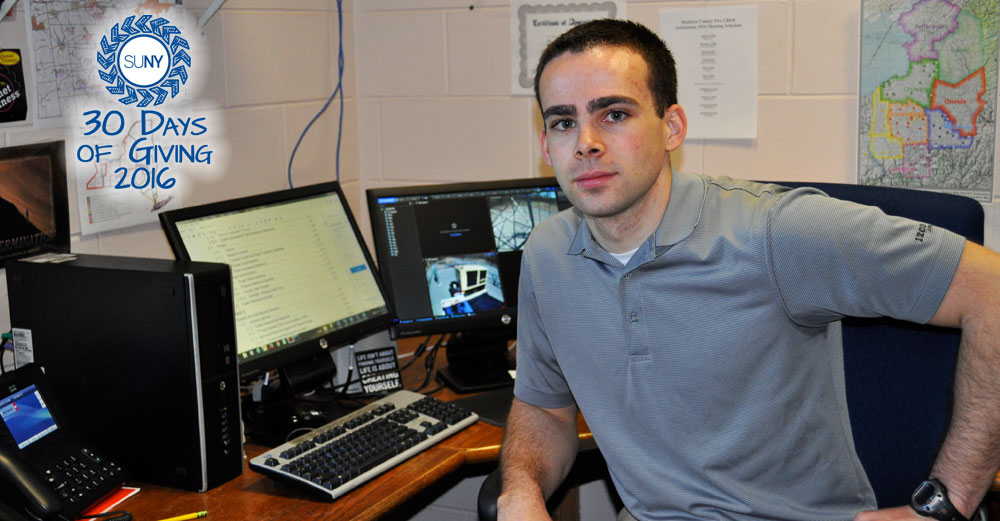 Being a donor could save a life. It’s a message Dale Durant is spreading.

Earlier this year, Durant donated his blood stem cells to a child he didn’t know through Be The Match, a national organization. Recently he was notified that she is doing well.

It was a Be The Match registry drive held at Morrisville State College that piqued Durant’s interest to become a donor. “Signing up literally took minutes,” he said of the registration process.

Be The Match, operated by the National Marrow Donor Program, maintains a database of millions of volunteers who stand ready to donate life-saving bone marrow or stem cells.

“Knowing that everything was a success made me feel like there was a reason I was chosen and was able to find the courage to follow through with the donation,” said Durant, a recent graduate of Morrisville State College’s criminal justice program who made the donation while he was a student.

His generosity moved the local community of Stockbridge, N.Y. where he grew up, attracting so much attention it went viral.

While life has gone back to normal for the 22-year-old Durant, the experience has left a lasting impression.

“It puts a smile on my face knowing that my own cells are functioning as someone else’s immune system and that I had the ability to give this person another outlook on life,” he said. “I’m fortunate to be healthy and this was an opportunity for me to give something to someone less fortunate.”

These days Durant is sharing his story to help raise awareness about the need for committed donors, a vital thread to the life-saving work of Be The Match.

Most recently he assisted at a Be The Match registry drive near his home to help find a donor for a local boy who has an auto-immune disorder and may need a transplant.  “I wanted to share my positive experiences and help reassure those who were signing up if they had any concerns,” he said.

Sharing his story just might inspire others to join the registry, he hopes. “The more donors they (Be The Match) have and the more chances they have of finding matches, the more lives they can save.”

Most who register never hear from the organization. Approximately one in 540 members of the Be The Match registry in the United States go on to donate bone marrow or peripheral blood stem cells (PBSC) to a patient.

Three years passed before Durant would realize the importance of his life-altering decision; he was being considered as a match for a child with an immune disorder.

Additional blood work and medical examinations confirmed that he was a genetic match for a peripheral blood stem cell transplant (PBSC), a high-tech procedure that can treat a number of different diseases.

The donation process, which is completely anonymous, prohibits the recipient and donor from exchanging any information about themselves for months after the transplant. Durant hopes to have the chance to meet his recipient someday.

Thanks to modern technology, the PBSC transplant Durant underwent was painless and similar to donating blood platelets.

Costs were covered by the organization, which also handled his screening appointments. “This is a wonderful organization,” Durant said. “They are so helpful and so dedicated to what they do. They try to make everything as easy as possible for the donor.”

In the weeks leading up to the transplant, Durant went about his daily routine, training for area cross fit competitions. His recovery, like that of most donors, was quick. Human bodies eventually replenish the marrow and stem cells they donate.

“Dale is a true inspiration to us all,” said MSC President David Rogers. “He is an example of how our students reach out to the community in extraordinary ways.”  The college has been recognized for its commitment to community service, being named to the President’s Higher Education Community Service Honor Roll in 2010, 2012, 2014 and 2015.

Durant’s selflessness is apparent in the community, too, where he has volunteered in various fundraising events. He also traveled to Delaware to repair houses for the less fortunate.

For more information about Be The Match, visit https://bethematch.org/.

Be The Match is a bone marrow registry of potential donors for people with leukemia, lymphomas and other blood cancers. For many living with those diseases, a bone marrow transplant is their only lifesaving option as more than 70 percent cannot find a donor match in their own families.