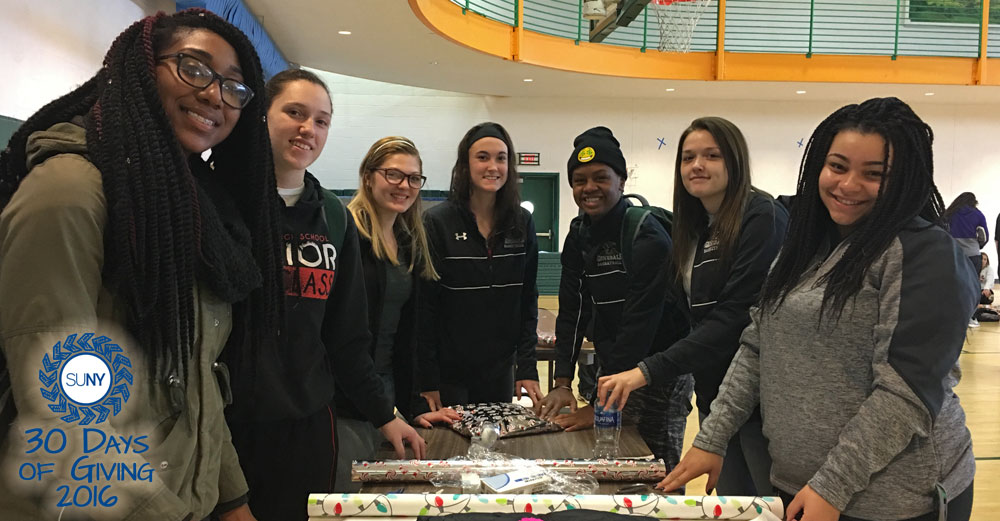 Gram Lorraine is a well-known name on the Herkimer County Community College campus. The Gram Lorraine Children’s Christmas Program, founded by Herkimer College Professor Emeritus Ray Lenarcic and his former students, has helped approximately 1,000 children in need over the past several holiday seasons. The program provides children with four items of clothing and a toy or book, through the generosity of participants.

Joining together with organizations throughout the community, a variety of student clubs, college offices and athletic teams have sponsored children over the years. This year, all 17 Herkimer Generals athletic teams are stepping up to help. Herkimer College was recently granted chapter recognition named in memory of Captain Peter McAvoy. From Scotland, McAvoy was captain of two national champion soccer teams at the college. Tragically, he passed away suddenly in 2014. He was both the epitome of a student-athlete and a genuinely great person and role model.

“As a former faculty member and coach at Herkimer College, I couldn’t be more proud of former student and present athletic director Donald Dutcher, the coaches and student-athletes whose generosity has helped guarantee the success of the Gram Lorraine Program,” Lenarcic said. “Herkimer College is deserving of chapter recognition, and naming said chapter after Captain Peter McAvoy was a no-brainer.”

Men’s soccer coach Pepe Aragon said, “It is an honor for Pete’s family and friends for Pete to be named as captain for the Herkimer College chapter of the Gram Lorraine Children’s Christmas Program. Our Herkimer Generals athletic program continues to keep Pete’s memory alive. What a great way to do so by helping families for Christmas.”

In addition to the gifts purchased, 300 winter jackets will also be distributed in connection with the Gram Lorraine cause, with at least 100 of them going to a local elementary school, Benton Hall Academy in Little Falls, New York.

Lenarcic made very clear, “Every child deserves a Christmas.”