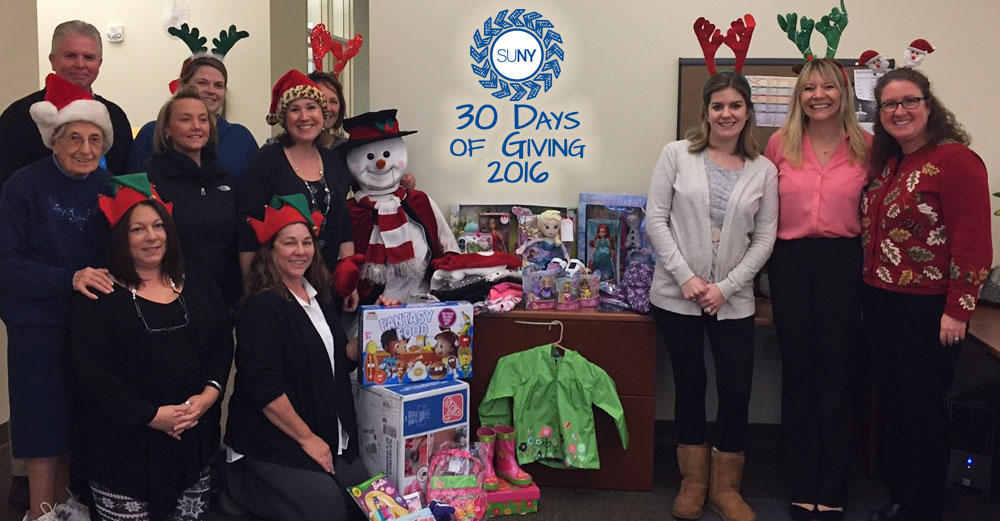 Three-year-old Lillian will be very busy Christmas morning, thanks to the Empire State College Office of Admissions and the Saratoga County Children’s Committee’s Empty Stocking Project.

Each child has his or her own wish list. Sponsors buy a gift, or gifts, selected from their matched child’s list, which the children’s committee uses to stuff each “stocking.”

By working together to share the cost of sponsorship, the entire staff of the Office of Admissions was able to fulfill all the wishes on Lillian’s list, plus a few extras. At the same time, every staff member was as a Secret Santa for a deserving little girl.

“I am so happy that my office now participates,” said Secret Santa Pam Berube, an office assistant with the college. “It really was fun to see the excitement in my office build as each present was brought in, which got everyone in the true spirit of giving.”

Berube began participating in Empty Stocking many years ago and, while talking with her colleagues, learned that others also participated individually. As a result of those discussions, the entire office staff participated as a group for the first time.

“I have been fortunate enough through the years to be able to celebrate the season with gifts for my children,” said Berube. “As they grew, the magic of Santa left, but never the spirit. As a family, we wanted to bring Christmas magic into the life of at least one underprivileged child. Life can bring such disappointing moments and, we felt, if for only one day, true Christmas magic could happen in their life.”

“Collaborating to support Lillian brought us together as a team,” said Secret Santa Mary Veitch Austin, the office’s staff supervisor and an admissions advisor. Veitch Austin followed in her mother’s footsteps, who had participated in the Empty Stocking project for a number of years. “Focusing on an underprivileged child in our community also added fun and anticipation to our daily tasks over the last month. We all felt so good knowing that our gifts would bring Lillian happiness on Christmas Day.”