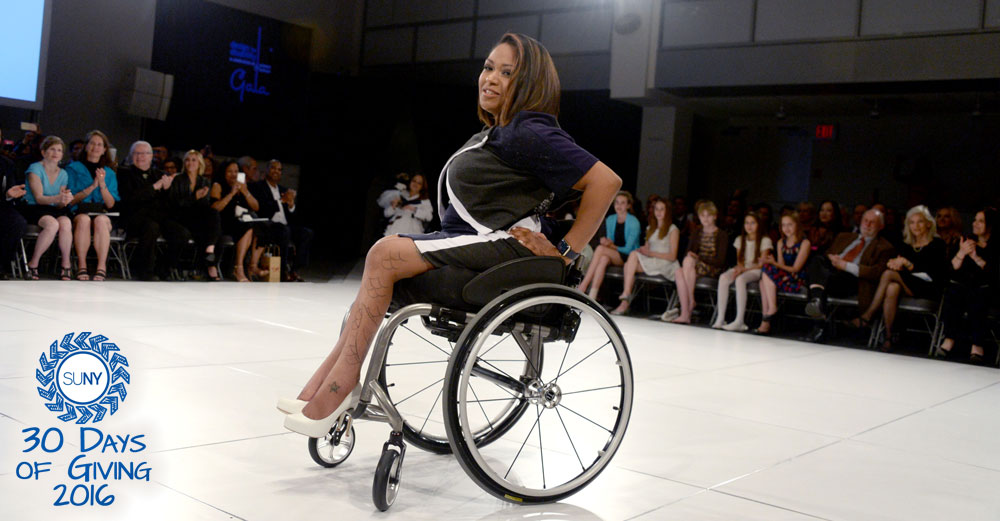 Five FIT Fashion Design students who were challenged to design and create stylish, functional business attire for ten women with disabilities proved that they were more than up to the task when their looks were revealed at the Cerebral Palsy Foundation’s first Design for Disability Gala. Held at Sotheby’s in New York on May 16, the evening’s main event was a runway show that wowed the crowd. Grace Elizabeth Insogna, a Fashion Design major minoring in Ethics and Sustainability, was selected as the winning designer by the contest’s judges: designer Thom Browne; Andrew Bolton, curator in charge at The Metropolitan Museum of Art’s Costume Institute; Academy Award–winning costume designer Ann Roth; disability rights advocate and model Dr. Danielle Sheypuk; and Dr. Alette Coble-Temple, Ms. Wheelchair America 2016.

The Design for Disability contest began approximately six months ago with 35 Fashion Institute of Technology students submitting sketches. The top five finalists—Grace Elizabeth Insogna, KatiLin Stone, Emily Chao, NyLeah Ford, and Ayao Sasaki—were paired with women with disabilities as their models. Over the next five months, they fashioned outfits for each of their models, working closely with them to create looks that allowed them maximum functionality paired with maximum style. Thom Browne acted as the designers’ mentor throughout the process.

On a square-shaped runway, the models radiated energy and joy as they showcased their looks to Selena Gomez & The Scene’s anthem “Who Says.” (“I wouldn’t want to be anybody else. … I’m no beauty queen. I’m just beautiful me.”) At the end of the show, the designers joined their models on the runway, garnering hugs and cheers.

Creating beautiful clothes that actually fit and work with wheelchairs and crutches was a lot easier said than done, said Insogna. She sought movement in her black and white mini-collection, which included a cape and accessible pockets for one of her models, and a pencil skirt that wouldn’t get caught in her other model’s wheelchair. “Learning about my models’ everyday lives and the challenges they face, that is to me the most important thing,” Insogna noted. “I hope this is going to be a catalyst. I hope this is going to start some change in the industry.” 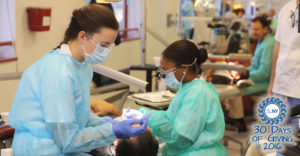 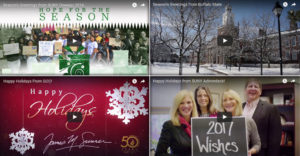 Next post Holiday Wishes From Our Campuses to You

Taras Kufel
November 26, 2022
This summer, twenty of SUNY Polytechnic Institute's incoming first-year EOP students joined others and volunteered at the Johnson and Park...
Onondaga Community College
November 25, 2022November 25, 2022
The students in Syracuse's Dr. Weeks Elementary School had huge smiles on their faces in early November thanks to Onondaga...
Shay Gauthier
December 29, 2021
To give back to SUNY campuses, the SUNY Fellows from System Administration organized a donation drive that helped support seven...
Shay Gauthier
December 26, 2021
Students from STEAM at Dr. King Elementary School will be a bit warmer this winter thanks to a donation of...
Tompkins Cortland Community College
December 24, 2021December 24, 2021
Culinary Arts students at Tompkins Cortland Community College helped make Thanksgiving a little bit sweeter for some veterans. Professor Susan...
Dutchess Community College
December 23, 2021December 23, 2021
Giving back to the community is a Dutchess Community College tradition – particularly during the holidays. And for DCC, the...