Bringing a Visual Touch to Music 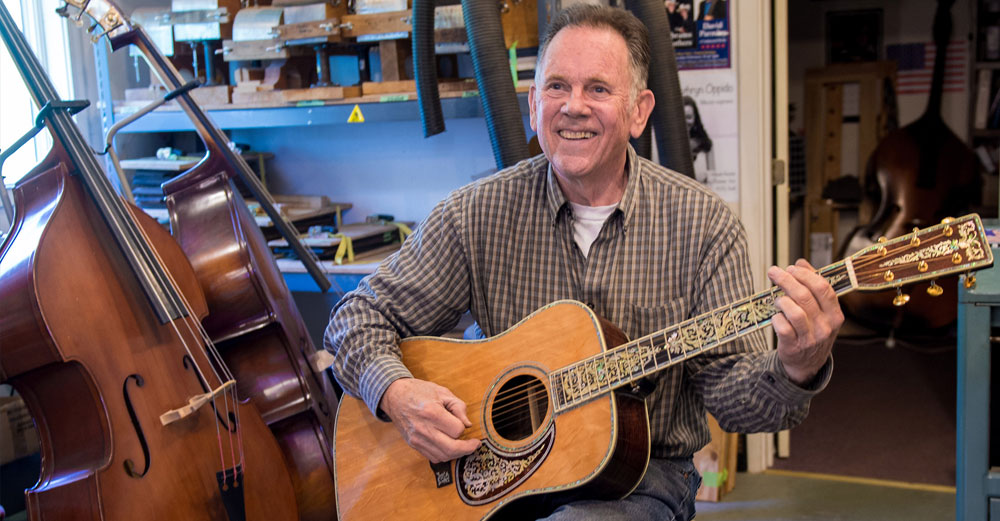 One of the finest guitar shops is located in a small, unassuming green house in the New York hamlet of Whippleville, just outside Malone in the northern most parts of the state. In the lower level, behind a cluttered and yet impeccably organized workbench, sits David R. Nichols, SUNY Canton Class of ’63, meticulously cutting out a flat piece of mother-of-pearl to adorn his custom instruments.

Nichols, who grew up woodworking alongside his father in Waddington, has hand built many guitars in his lifetime, including ones for blues legend BB King and country superstar Johnny Cash. He has even built a series of guitars for ZZ Top and provided custom inlay work for Aerosmith. His hands are all over some of the most recognized music of our lifetimes.

The world-renowned luthier started his academic career by being dragged to the old campus by his father and forcibly enrolled in the Heating and Air Conditioning program. “My father was friends with the dean, Albert French,” Nichols said. “I didn’t really have much of a choice in the matter.”

After SUNY Canton, Nichols went on to receive his bacheleor’s degree from SUNY Oswego and his doctorate from Syracuse University.

His work with musical instruments began in the early 60’s when he helped Pennsylvania-based guitar maker C.F. Martin & Co. re-release a guitar with pearl inlay. For the next several years, Nichols managed to do almost all of the custom inlay for the legendary American guitar company.

Nichols’s hard work hasn’t gone unrecognized in his lifetime. In addition to the fans who take note of the instruments their favorite artists use to make music, he has been recognized by Traditional Arts in Upstate New York (TAUNY) for his custom-made musical instruments and his creative contributions to musicians from around the world.

Most of his musical instruments are built during the winter months while he teaches others to learn his craft in one-week guitar making and inlay classes. He even offers college credit-bearing internships for students who have an interest in learning his methods. But outside of his working hours, he tours and plays in the bluegrass band David Nichols & Spare Change during the summer. “I’m slowing down,” he said in jest. “I Only work 12 hours a day.”