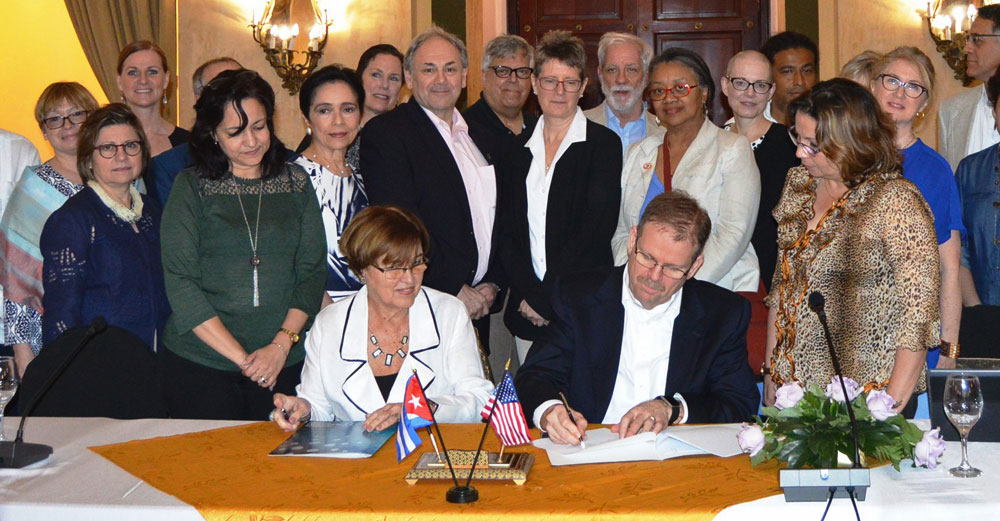 Back in April 2015, SUNY made history when Chancellor Zimpher had the opportunity to join Governor Andrew Cuomo in New York’s first trade mission to our southern neighbor, Cuba, in more than 56 years. The trip was significant in that it laid the groundwork for a future of new and expanded travel and business relationships between the two countries. To make these new relationships flourish, it was known that education and research would surely be a part of the growth.

As a result of that original trip, Chancellor Zimpher returned from Cuba determined to open new engagements between SUNY and the island nation, which included goals to:

Now, in February 2017, that determination was rewarded with a new memorandum of understanding signed and made official in a return visit to Cuba.

The path to international partnership

Why SUNY? The Cuban Ministry of Higher Education (MHE) is particularly focused on SUNY because of the similarity in scale and scope shared between the two systems.

While the United States and Cuba have many differences, we do share a common goal to educate and expand opportunities for our citizens. After nearly 60 years of limited interactions between the two countries, both sides still see higher education as one of the most important parts in restoring relations. Better educated populations will allow closer ties between people, a better understanding of our people and cultures, and an open path to enhance future progress. 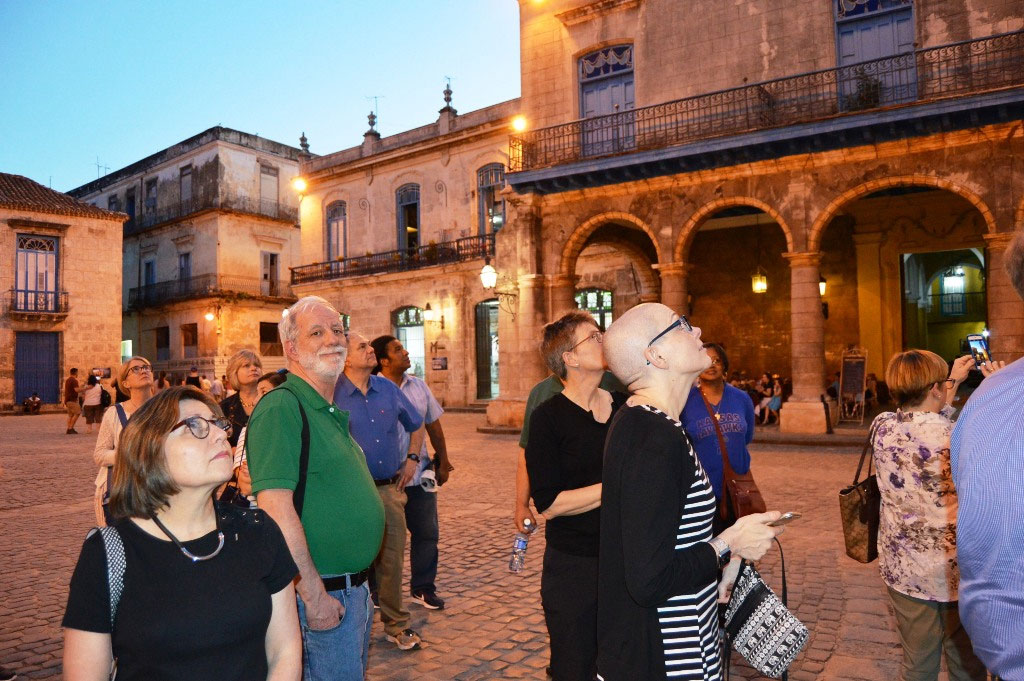 Members of the SUNY delegation stand outside looking at the Havana Cathedral in the old city center.

To begin this process, a delegation of 20 leaders and educators from seven SUNY campuses (Buffalo State College, Farmingdale, FIT, New Paltz, Nassau Community College, Old Westbury, Potsdam) joined together to make the trip to Cuba. Led by SUNY Provost Alexander Cartwright, the group visited six Cuban education institutions along with the U.S. Embassy in Havana and other cultural sites of importance. In addition, they met with a group of students currently studying abroad in Havana through programs at the University at Albany and SUNY Oswego. They also held a day-long meeting with six of Cuba’s regional universities to explore possibilities for collaboration. 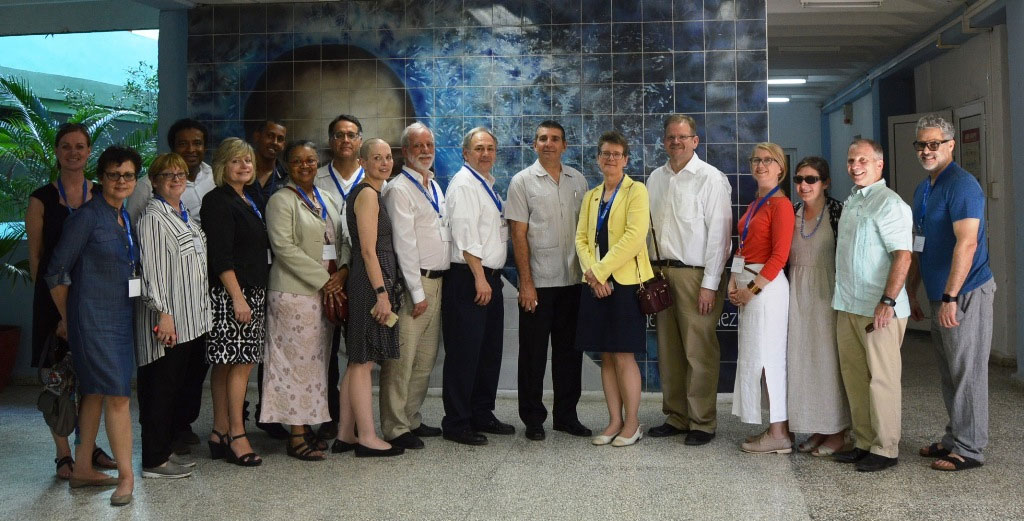 Members of the SUNY delegation together while touring the University of Cienfuegos.

During these visits, there were some areas of education uncovered in which Cuban universities would like to collaborate with SUNY, and our institutions have the interest in place to offer this support.

One of the Cuban MHE’s hopes is to expand technical education in order to provide more jobs for people in the country. SUNY, having a special focus on 2-3 year technical education programs at our community colleges, offers a model for both institutions to work together to see what techniques are best to use.

Another area of interest is English study, which has been introduced as a degree requirement in Cuban higher education. Cuba is interested in connecting with the SUNY System on faculty needs and updating methodology, particularly given SUNY’s strong focus on teacher preparation, including several graduate programs in TESOL and multiple accredited intensive English language institutes on SUNY campuses. 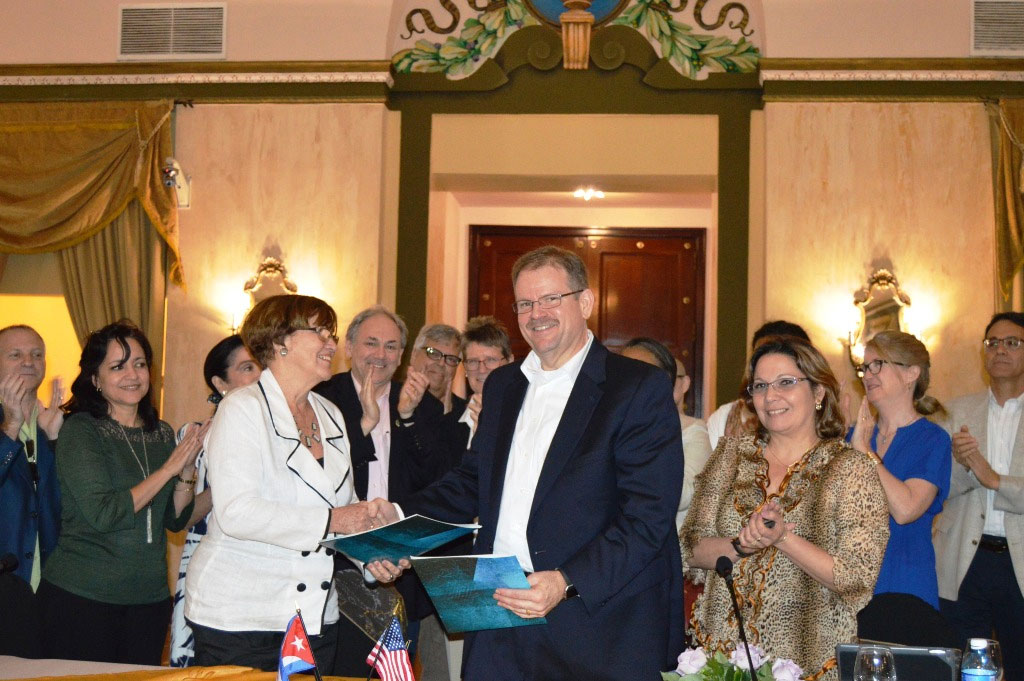 Provost Alexander Cartwright with a Cuban education minister after signing the MOU in Havana.

While in Cuba, a Memorandum of Understanding was officially signed by the two systems as an agreement to work collaboratively. According to Cuban Vice Minister Aurora Fernández González, it is the first agreement that her Ministry has ever signed with a U.S. university. SUNY and the Cuban MHE are agreeing to cooperate, promote, coordinate and facilitate collaborations among their respective institutions, aiming to aid in developing areas of research and academia. Some of the main areas of cooperation include:

In addition to the MOU signed between the two systems, two bilateral agreements were signed by SUNY institutions and their Cuban partners. SUNY New Paltz and SUNY Potsdam have made student and faculty exchange agreements with university partners in Cuba.

With this foundation in place, a new future is being formed with new opportunities to come for students, faculty, and researchers alike. Many new international partnerships are sure to come in the years ahead. SUNY’s reach throughout the world has now taken another step forward.