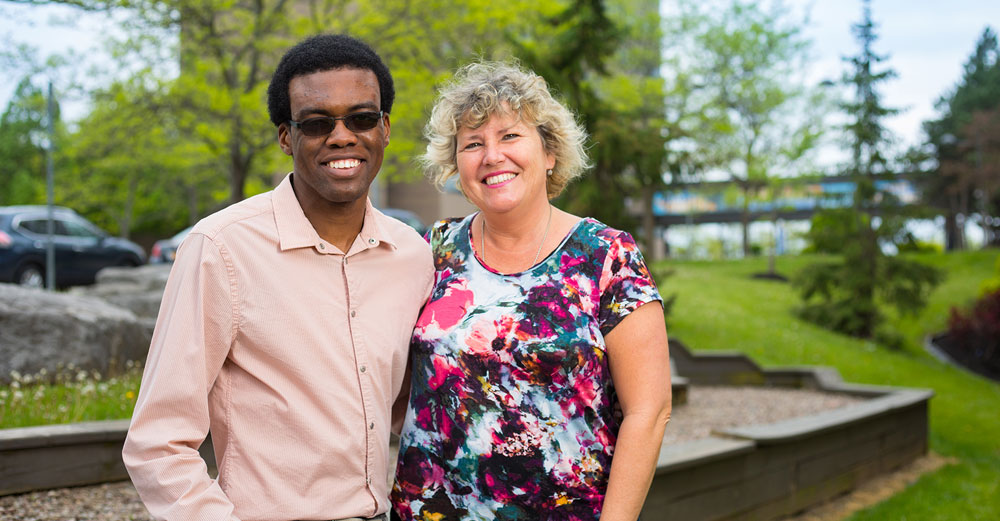 When Garfield O. Walker was asked to give an acceptance speech for winning the University at Buffalo‘s Educational Opportunity Program‘s award given to the student who displays endurance and courage in the face of extraordinary challenges, he was understandably and predictably nervous.

This would be the first speech of this kind Garfield had ever given. As an unusually introspected and introverted person, he mentally prepared for the emotional toll of standing in front of his peers and academic mentors and “being vulnerable,” as he put it.

“After much contemplation,” he shared with his audience Nov. 1 in UB’s Student Union Theater, “the courage I needed to tell my story birthed itself within me.”

Garfield’s speech after accepting UB’s Arthur O. Eve Award was as much a rallying point for others as it was another personal triumph. He could see people in the audience tearing up. Students he didn’t know approached him after he finished and told him how inspired and impressed they were.

“It was very surprising to see students come up to me and say, ‘Garfield, I heard your story,'” he said. “And I’m very private about some things. So when they did, it was kind of like, ‘Oh God.'”

It was an extraordinary speech, both in what he said and his decision to deliver it. For Garfield, it was just one more extraordinary scene in a personal story that exemplifies EOP values with enough details and drama to fuel an inspirational movie. If the EOP seeks to provide avenues for promising students whose educational, economic and personal boundaries would otherwise hold them back, no one exemplifies that model more than Garfield.

Raised in Jamaica in a single-parent household that was anything but financially well-off, Garfield was born with a rare genetic disorder known as Marfan syndrome, a genetic mutation that causes cardiovascular, ocular and skeletal abnormalities, often affecting the aorta and heart valves. Garfield’s surgeries included a 17-hour triple bypass valve replacement when he was 15 that left his chest open for three days. A few years later he had another surgery to replace his heart valve, forcing him to take the fall semester off and left him wondering “Why is this happening to me again?”

Redeeming a boy with a ‘death sentence’

There always seems to be more. Last spring, Garfield learned his mother – unemployed for two years – was diagnosed with breast cancer.

“I spiraled into a depression,” he said in his speech. “And even though these were wounds that were not shown on my body, they were much deeper and more painful than anything that bleeds. But I survived and became brave for the both of us, and I told myself that I would not let this misfortune deter me from excelling.”

And excel he has, majoring in biomedical sciences. His overall goal is to become a physician, a goal that crystalized after he met his first cardiologist, Dr. Whiteman, “amazed” because “a man who was knowledgeable in medicine saved the boy who was given a death sentence by his genes.”

One semester away from graduating, Garfield has a 3.967 academic average and a 4.0 for six of his semesters. Trying to challenge himself as much as he can, Garfield applied and was accepted to UB’s Honors Program. When he had to drop his courses and to have his second open-heart surgery, Garfield returned in spring 2016 and took 18 credit hours, including human physiology, anatomy and biopsychology, and earned a 4.0.

His story also exemplifies the EOP legacy. Garfield acknowledges he probably would have never been admitted to college without the special consideration he was given by UB’s EOP. He graduated in three years from a Bronx high school he says wasn’t a good fit because it had low academic standards, did well on the Regents, but poorly on the SATs. Despite this, UB’s EOP enrolled him when he was 17, and there he found the guidance that is an EOP signature.

“Without the EOP program, I wouldn’t have been able to get into college because my high school was not a good school,” he said.

“I am more narrow when it comes to my support system. I made a connection with Lani,” Garfield said, referring to Lani Jendrowski, senior counselor for what is known as UB’s Arthur O. Eve Educational Opportunity Program.

“She is my counselor. She knows my story very well. I connected with her very well. So she personally saw that during my freshman year I was still depressed. And sophomore year, I was even worse. So she told me about the counseling services at Richmond Hall and told me to go, and I went there.

“During her free time, she would drive me to my eye and heart appointments, because it is a struggle for me to get to places. There is always something that is going on. Lani goes above and beyond to help me. When I was coming back after taking off the fall semester from my heart surgery, she was generous enough to pick me up at the airport and help me buy groceries, and take them to my apartment on campus. I was really grateful for that.

“I would go to her with an issue and before I could tell her fully what is bothering me – academic or personal – she had a solution. She always does. It’s like magic.”

Standing out in a crowd

Jendrowski is protective of Garfield, keeping in touch and offering advice whenever needed. “EOP takes a holistic approach in advising for all of our students,” she said. “It is not just about academics.

“The first thing that comes to mind each and every time I see Garfield is, ‘Wow, he is tall,'” Jendrowski said. “His height is unbelievable, but that is not what really makes him stand out in a crowd.

“After getting to know him, I know that he faces many physical barriers, but he strives every day to do his best. He is driven by his family, his culture and his desire to make a better life for those around him. He is gracious and humble.”

Garfield’s aunt recently died, Jendrowski said. Rather than dwelling on her death, she said, he took it upon himself to set up a GoFundMe page for her children, raising more than $1,000 in two weeks.

“Garfield faces many challenges, yet never seeks help unless he is unable to resolve the issue on his own,” Jendrowski said. “I am grateful that during my 30-year tenure at the University at Buffalo I have had the opportunity to know Garfield and help him reach his goals.”

Garfield’s path is anything but certain. His still struggles with depression and angst over his physical obstacles and childhood trauma he endured because of his physical limitations. He refers to “that thing going on in my head” when he talks about the conflict between his fierce ambitions and growing confidence in his intellect, and finding that elusive “peace within himself.”

“Looking back,” he said, speaking precisely and carefully, still with a healthy dose of his Jamaican accent, “I have achieved a lot under my circumstances. So I think I am somewhat capable or somewhat worthy to be called ‘smart.'”

Garfield is blunt about his condition, his present and his future. He still struggles with being “the guy who was always sick.” And any accurate characterization of him must include that dimension. And make no mistake. Agreeing to be featured in this story is another sign of his becoming more comfortable with who he is.

“Growing up, I created a shell for myself. I always go by the rules. Do this. Don’t do that. Play it safe all the time. And whenever I do deviate, something bad happens,” Garfield said.

“For example, with my eye. One day I went to play volleyball and I injured my eye. So with that being said, I have a mentality I should not stretch myself. I should not try too hard in my classes. I want to do even more. I want to take on the extra projects. I want to be in an environment that pushes me to the limit because I know I have the capabilities to do a lot of things.

“But in my head, I keep on limiting because I am fearful. I am scared if I do go out of my comfort zone, I might do something bad to my health. So in my mind, whichever class I am taking, it it’s always, ‘Garfield, don’t study too much. Take a break.’ Even though my mind can go on, my body can’t go on. So you have to find a common ground.”

Garfield said his cardiologist reassured him that his physical condition should not be an issue during medical school, nor should it hinder him from completing his residency.

“She pointed out that the major that I am in, biomedical sciences, requires a similar amount of stress and dedication to complete as does medical school,” he said. “So I should not worry.”

But sanitizing his situation would be a disservice to his inner strength of facing his inner conflict.

“Being a physician has been all I have ever wanted to do,” he said. “But at times – doctor’s appointments, experiencing palpitations, feeling fatigue – I feel like I will not be able to fulfill my dreams, because I might die prematurely. As a result, I have detached myself from the thought of becoming a physician.

“For a long time, the thought of being a doctor has kept me going. After all, it was doctors who literally saved my life. I wanted to be a physician desperately, so that I could return the favor to someone living in the circumstances to which I found myself. The weight of that and the thought of not becoming a doctor because my medical condition could terminate my life were too much to bare….I had to stop!

“That’s very depressing. I don’t know what else to do, because my mind can go on for hours. I can read a textbook and read it again, and it can go on, but my body can’t keep up with me. And that’s a big issue.

“It is no longer my end goal – no longer the light at the end of the tunnel. Being a physician no longer symbolizes my triumph over evil, my genetic condition. It’s just a career. So now, if I were to die prematurely, it would not matter. I am doing what I love to do. I love to learn. I love to challenge myself intellectually.”