A Springboard For Innovation Into Tomorrow’s Medical Breakthroughs 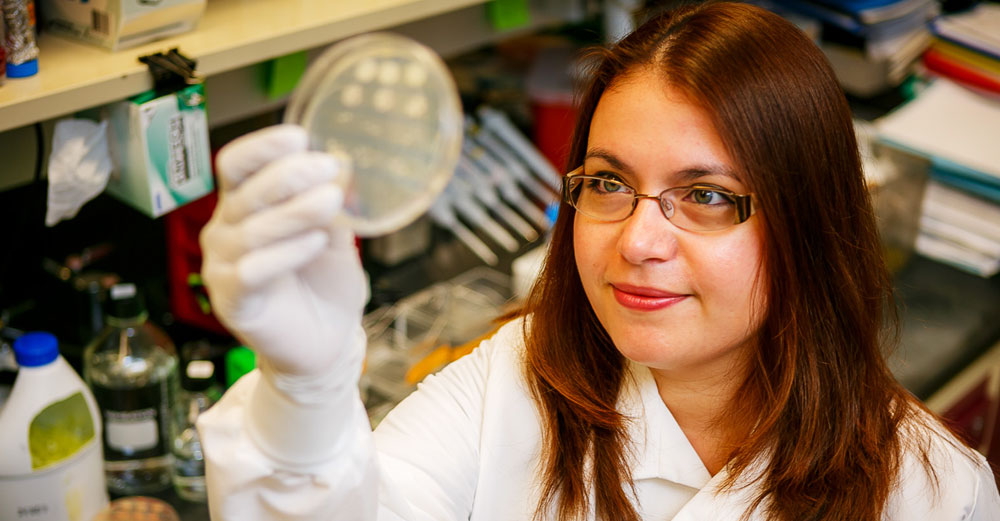 Thanks to high profile criminal trials, television shows like CSI, and the growing popularity of ancestry testing kits, just about everyone has heard of DNA, the blueprint for all living things.

Its close chemical cousin, RNA? Not so much.

RNA is the catalyst that turns DNA’s genetic plans into organisms – everything from protozoa to people – by copying specific pieces of the blueprint to assemble proteins. The human body contains many thousands of different proteins. Each protein’s structure determines its purpose whether it’s building bones, muscle and other tissues; regulating bodily processes; or protecting against disease.

The targeting of proteins with therapeutics has been the sole focus of drug development for the last hundred years. Paul F. Agris, founding director of The RNA Institute at the University at Albany, likens this approach to treating a symptom, say inflating a flat tire, without addressing the root cause of the problem, the leaking valve.

What’s behind the RNA Institute?

‘”RNA research is a new frontier in science that explores and exploits how each of the 1.675 million RNAs in the human genome work and network with each other to control protein production” explains Agris. Just as research on DNA has led to an untold number of discoveries, new products, and medicines, RNA has the potential to revolutionize biomedical science and cancer research.

Because of its chemical instability, RNA is much more difficult to work with than DNA. That’s where The RNA Institute comes in. “Our focus is on developing tools and analytics for moving RNA therapeutics down the drug candidate pathway,” said Agris. Since its inception in 2009, federal, state and private investments have resulted in a significant expansion of faculty, research staff, labs and instrumentation.

Today, The RNA Institute is leading research dedicated to RNA technology development worldwide. Agris proudly cites the Institute’s computational capabilities, which enable researchers to immerse themselves in specific molecules, and notes that its nuclear magnetic resonance spectroscopy facility is one of only a few labs in the world that can conduct experiments on live cells. The Institute is also equipped with 3-D printers that are used to make prototypes of new technologies, and the Institute is one of few centers worldwide with the ability to analyze modified RNA with extreme sensitivity and epitranscriptomics (or biochemical modifications of RNA), among other technologies.

Over the past three years, scientists at The RNA Institute have developed 17 new technologies, four of which are ready to be commercialized. Three of these – real-time observation of separations of subpopulations of molecular structure and interactions with most modern centrifuge technologies; recognition and capture of microRNA by trigger of nanoswitch analysis; and calibration of a platform of biophysical and biochemical instrumentation with a nucleic acid (RNA or DNA) standard – have real potential to significantly advance RNA research. The fourth, a unique antibiotic against drug resistant Gram-positive pathogens, such as MRSA, will address a global health problem.

While the state-of-the-art facility is biochemically sterile, its physical design encourages intellectual cross-pollination. Nowhere is this more evident than on the glass walls that provide writing surfaces for impromptu meetings, which are covered with equations, notes, graphs and drawings. Mentor-based training and research collaborations at the Institute are the high impact practices that create a dynamic environment to beyond-the-bench research. The Institute offers a variety of outreach programs engaging the local community youths interested in STEM in an ongoing dialogue and hands-on experiments with faculty and staff. This includes high school student apprenticeships – several of which have led to prestigious recognition, awards and scholarships.

This unique combination of mission, vision and physical resources has attracted accomplished scientists and engineers from world renowned labs at MIT, Harvard, NYU, Stanford and RPI. The RNA Institute recently celebrated its first National Science Foundation CAREER Award winner. Alan Chen, assistant chemistry professor, aims to bring complex RNA molecules to life through 3D computer simulation. He believes it is imperative for industry researchers to actually ‘see’ on their computer screen the 3D shape of the molecules they have been manipulating ‘in the dark’ all these years.

By its very nature, The RNA Institute promotes entrepreneurship. Upon arriving at the Institute in 2012, Tony Hoang, a Ph.D. chemistry candidate, began exploring the idea of creating accessories to help scientists. He now has six pending utility patents (a University at Albany student record) and launched a biotech start-up, Advanced Modular Instruments (AMI), in December 2016. AMI is focused on simplifying complex procedures by allowing lab technicians to swap out different scientific instruments with a modular attachment depending on their need.

The RNA Institute has come a long way in a short time, but Agris says its story is incomplete. “Right now, we’re in a proof of concept state. We need commercialization success to achieve RNA’s promise to address challenging human health problems.”