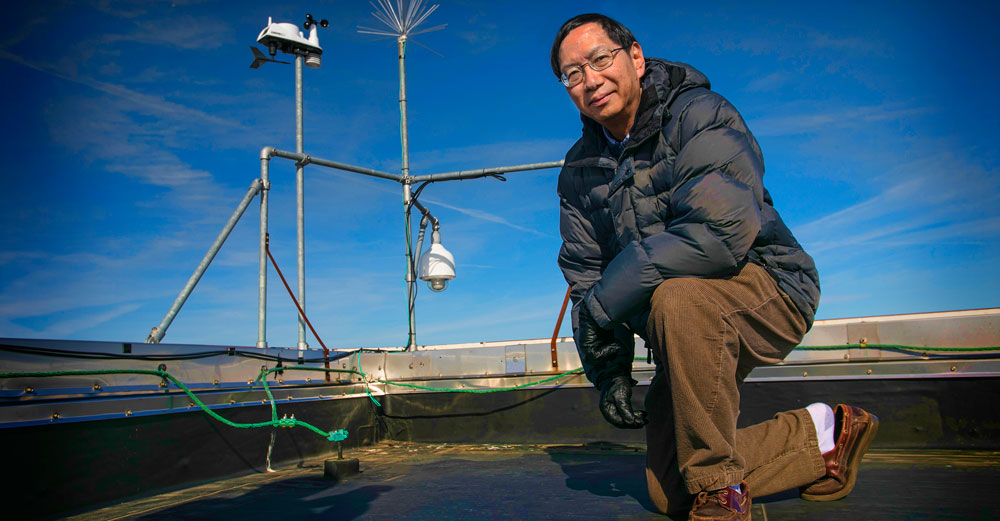 Dr. Edmund Chang, professor of atmospheric sciences at Stony Brook University and co-leader of a NOAA task force, investigates storms the way Sherlock Holmes investigates his quarry: he observes their every move, he predicts where and how they will next strike, he perfects his surveillance tools. But above and beyond the similarity in approach lies a similarity in goal: Like Sherlock Holmes, Dr. Chang aims to protect people from harm by using the scientific method to serve the public good.

Dr. Chang studies storm tracks, a general term used by the atmospheric science community to describe storms that develop in the mid-latitudes, as opposed to tropical storms or hurricanes. In winter, storm tracks bring abundant snow and cold; in summer, fresh, cool weather; in coastal areas they can give rise to storm surge—an abnormal and devastating rush of seawater that destroys communities wholesale. They also constitute an important element of global circulation as they carry large amounts of heat, momentum, and moisture poleward.

Part of Dr. Chang’s research is exploring how storm tracks will undergo variations and change under global warming; because these storms bring in most of our weather, it’s important to model how they may change so that we can defend ourselves against future extreme weather events.

Chang’s expertise is observed variations and changes in storm tracks. He contributed to the Intergovernmental Panel on Climate Change’s 2007 report, which won the IPCC the Nobel Peace Prize, along with Al Gore, in honor of “their efforts to build up and disseminate greater knowledge about man-made climate change, and to lay the foundations for the measures that are needed to counteract such change.”

Ten years later, Dr. Chang is continuing the same work with storm tracks “because we have some idea of the global change of storms, but the details of how the storms change in each individual region is very important for climate,” he explains. In his research, he employs a wide range of research tools, including gridded atmospheric analyses to learn about the basic characteristics of the phenomena, observations to validate the gridded data, and dynamical studies to better understand the observed phenomena.

He’s also using a similar process to develop better tools for predicting mid-latitude storms. Until recently, weather predictions have focused on either short-range forecasts out to a week or so, or climate projections out to decades; projecting how storm activity will change over an in-between time scale of weeks to months has been sorely ignored.

Supported by a NOAA grant through the Office of Atmospheric Research’s Modeling, Analysis, Predictions and Projections (MAPP) Program, Chang is co-leading a task force that uses a new technique called multi-model ensemble to develop tools to help forecasters predict storm activity from a few weeks to a few months out. The MAPP Program couples, integrates, and applies various types of models—oceanic, atmospheric, Earth system, general circulation—across NOAA, partnering agencies, and the scientific research community as a whole to create better predictive tools.

This is where the scientific method benefits the public good. Being able to predict weather several weeks or months in advance will allow disaster relief workers to stockpile emergency supplies; it will inform farmers whether they should be buying drought- or flood-resistant seeds; it will help water resource managers predict future water consumption. In a world where change may bring unwelcome results, accurate predictions like Dr. Chang’s will help protect the people and places we cherish.