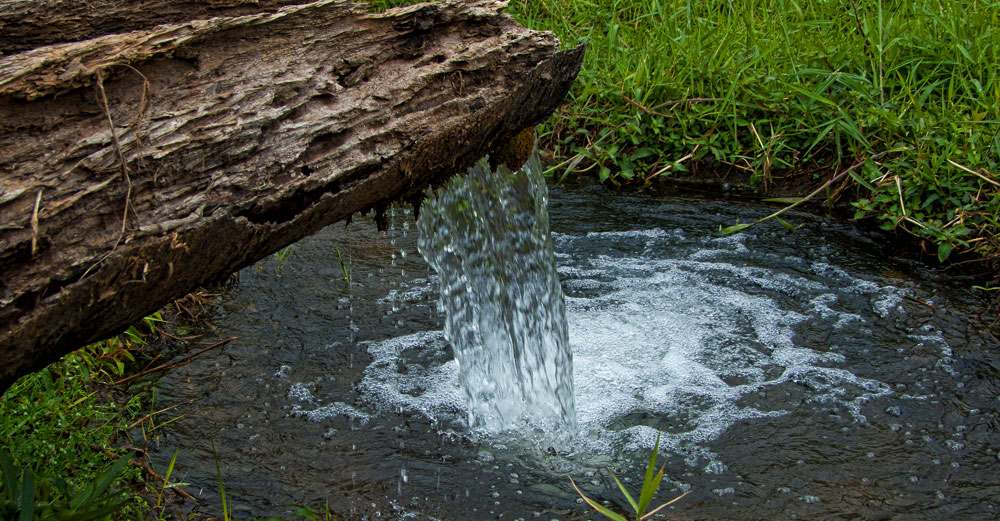 Water covers 75% of the Earth’s surface, but just 1% of it is readily available as drinkable fresh water. Human activities in the form of agriculture, fossil fuel extraction and use, land development, sewage and trash are a constant threat to this vital and very limited resource. But with the proper mindset and investment, we can make a difference. We learned about the value of renewable hydropower thanks to Chancellor Kristina Johnson‘s work with Cube Hydro Partners. This type of outlook can be replicated to make an impact on the availability of fresh water throughout the world.

From New York to across the globe, SUNY researchers and students are working to understand aquatic ecosystems and watershed processes; monitor water quality; protect water resources; and develop new technologies that will ensure a sustainable water future. Let’s take a look at how and where these efforts are taking place.

The Earth’s current supply of fresh water is the same water that has existed on the planet for billions of years. It is continually reused and recycled in a complex process of evaporation, condensation and precipitation known as the hydrologic cycle. Worldwide, global climate change having a measurable effect on this cycle, resulting in changes in precipitation, rising tides and declining water quality.

The University at Albany’s Department of Atmospheric and Environmental Sciences (DAES) offers some of the most sophisticated programs in atmospheric and environmental sciences in the U.S. The campus is also home to the Atmospheric Sciences Research Center (ASRC), a system-wide resource for studying the physical and chemical processes of the atmosphere, land, and water systems. Climate scientists within DAES and ASRC conduct research to understand the Earth’s global and regional climate system and to assess the effects of climate change caused by both human activities and nature.

UAlbany’s Mathias Vuille, for example, explores climate change in South America and its impact on water resources. He recently received a $5 million grant from the National Science Foundation (NSF) to study climate variations over the last millennium in North and South America. The idea is that a better understanding of how and why Earth’s climate has varied naturally – long before humans made a significant impact – can be used to reduce worldwide risks associated with climate change over the next 100 years.

Dr. Wei-Chyung Wang, on the other hand, is focused on current climate changes that are associated with human activities. He uses global and regional climate models to understand the physical and chemical processes that cause the greenhouse effect, changes of atmospheric ozone, and impact the aerosols-clouds-precipitation interaction; and to assess future regional climate changes.

Dr. Edmund Chang, professor of atmospheric sciences at Stony Brook University’s School of Marine and Atmospheric Sciences (SoMAS), was part of the Intergovernmental Panel on Climate Change’s 2007 report, which won the IPCC the Nobel Peace Prize. Ten years later, Dr. Chang is continuing the same work tracking and predicting regional weather events that can also significantly affect water quality. These include those storms that bring snow in the winter, cool weather in the summer and give rise to storm surges in coastal areas “because we have some idea of the global change of storms, but the details of how the storms change in each individual region is very important for climate.”

New York State contains portions of two of the five Great Lakes (Erie and Ontario), more than 7,600 freshwater lakes, ponds and reservoirs, over 70,000 miles of rivers and streams, and over 1,800 miles of coastline. These aquatic systems play important roles in the state’s economy and provide drinking water for New York’s 19.75 million residents. All are faced with environmental challenges and SUNY researchers and engineers are seeking solutions.

Stony Brook professor Christopher Gobler is a marine biologist and leading researcher on the harmful algal blooms that have become increasingly common in Long Island’s coastal waters. Many of these blooms can be traced to discharges from septic systems and sewage treatment plants, along with storm runoff from over fertilized lawns and agricultural fields, which are a major source of nitrate and phosphate contamination.

Gobler’s studies have shown that increasing levels of nitrogen in the water have had a dramatic effect on coastal ecosystems including a 90% loss of seagrass and salt marshes and a large decrease in shellfish landings. In addition to his research, Gobler helped develop the Long Island Nitrogen Action Plan and is working closely with Suffolk County to address how septic systems and cesspools are contributing to the area’s nitrogen pollution problem. The U.S. Environmental Protection Agency presented Gobler with an Environmental Champion award for his groundbreaking research on Long Island’s water quality problems.

Understanding and managing smaller watershed units, such as streams, is a necessary precursor to managing larger units, such as the river basins that shape the health and economies of their associated bays, deltas and coastal environments. Binghamton University’s Center for Integrated Watershed Studies serves as a source of expertise on natural features of watersheds and human effects on them, addressing biological, geological, geographic, economic and societal components at all levels of integration. The center’s activities range from field data collection for scholarly research to policy analysis and education.

Algal blooms are a significant source of concern across New York State watersheds. This summer more than 85 of New York lakes and ponds experienced toxic algal blooms including all eleven Finger Lakes. These blooms are increasingly becoming a threat to drinking water across the state. Some of the blooms produce dangerous toxins that can sicken or kill people and raise water treatment costs. Greg Boyer, a SUNY ESF professor and director of the Great Lakes Research Consortium, is leading a concerted effort dedicated to evaluating the problem and its causes, along with developing monitoring systems to protect drinking and recreational waters.

With 35 million people living within the Great Lakes ecosystem, most of whom use and lose plastic, there is substantial reason to believe that plastic debris will be found in North America’s “inland seas.” Still, the results of a 2012 survey led by SUNY Fredonia environmental scientist Sherri Mason were astounding — Lake Erie had higher concentrations of microplastics than any other body of water on Earth. The tiny particles (less than 5 millimeters long) absorb other pollutants, such as DDT, polyaromatic hydrocarbons (PAHs) and polychlorinated biphenyls (PCBs), and are too small for treatment plants to filter out.

As a result of Mason’s research, Congress passed a ban on the use of plastic microbeads as exfoliates in toothpaste and other body care products. Now she has turned her attention to microfibers — tiny strands of acrylic, nylon, spandex, and polyester — that are shed in clothes washers and have been detected in 94% of tap water samples tested in the US.

Meanwhile at the University at Buffalo, scientists and engineers at the Research and Education in eNergy, Environment and Water (Renew) Institute will target even tinier threats. Just like 20th century heavy industry, advanced manufacturing –- think biotech, photonics, and nanotechnology — poses pollution risks, especially to freshwater.

Diana Aga, PhD, the Henry M. Woodburn Professor of Chemistry at UB, has spent her career developing techniques for detecting contaminants such as pharmaceuticals, antibiotics and endocrine disrupters in the environment. Her research team, which includes Buffalo State aquatic ecologist Alicia Pérez Fuentetaja, detected high concentrations of human antidepressants and their metabolized remnants in the brain tissue of 10 fish species found in the Niagara River. The study raises concerns regarding wastewater treatment plants, whose operations have not kept up with the times, and renewed discussion about safer/smarter disposal of drugs.

Benthos – the worms, crustaceans, bivalves and other small aquatic animals that live on, in, or near the bottom of water bodies – can also serve as indicators of water quality. Since 2013, Alexander Karatayev, director of the Great Lakes Center at Buffalo State, and senior research scientist Lyubov Burlakova been conducting one of the world’s largest monitoring of benthic invertebrates across the five Great Lakes. These studies are sponsored by U.S. Environmental Protection Agency.

Understanding a complex system like the Great Lakes requires specialized knowledge from many different disciplines. The Great Lakes Center brings together more than 25 affiliated faculty from eight academic departments at Buffalo State to conduct research in aquatic ecology, fisheries, environmental toxicology and chemistry, urban ecology, watershed dynamics, and environmental education. For half a century, the center has provided the best possible science to decision-makers concerned with the health and sustainability of the Great Lakes, which supply drinking water to tens of millions of people.

How do we mitigate fresh water issues?

Current methods of converting salt or polluted water into clean, drinkable water are expensive and not very efficient. SUNY researchers are at the forefront of finding new ways to reduce pollution and increase access to freshwater through such technologies as purification, desalination, reuse and treatments.

Several groups of UAlbany researchers are developing new innovations and employing existing technologies in creative ways to improve water research. Igor Lednev, an internationally recognized expert in the field of Raman spectroscopy, is applying the technique to reveal organic contaminants in waste-water. Research by Mehmet Yigit is leading to the development of a new, cost-effective technique that can rapidly detect mercury and heavy metal contamination in water supplies.

The New York State Center for Clean Water Technology at Stony Brook University, a venture lead jointly by SOMAS and the College of Engineering and Applied Sciences, developed Nitrogen Removing Biofilters that are potentially a cost-effective replacement for septic systems that are a leading cause of water contamination on Long Island. In the area of drinking water, the Center is focused on developing and evaluating methods to remove contaminants from drinking water, with an initial focus on dioxane in groundwater.

Also at Stony Brook, Distinguished Professor of Chemistry Benjamin Hsiao developed a breakthrough membrane technology for water purification, which can remove pathogens and other contaminants using low energy sources such as gravity and solar heat. While traditional water filters are made of polymer membranes with tiny pores, Hsiao’s filters are made of fibers that are all tangled up, and the pores are the natural gaps between the strands.

The team was able to cut costs even further by using “biomass” nanofibers extracted from trees, grasses, shrubs — even old paper to build natural biofilters that effectively remove lead, cadmium, uranium, and other toxic metal ions from water. The NSF-supported research and technology, is being used as a sustainable water filtering technology in developing areas.

In a similar vein, University at Buffalo researchers Haiqing Lin and Bing Gong developed nanostructured materials with sub-nanometer pores that could enable water purification membranes to catch more salts as water passes through. The improved membrane is also designed to cut in half the amount of energy required to operate it.

UB startup, Sunny Clean Water, has found a quick way to transform how potable water gets to people in developing countries or in areas stricken by natural disasters like earthquakes or hurricanes. The technology – a carbon based cloth that enhances solar powered evaporation – was developed by associate professor of electrical engineering Qiaoqiang Gan, CEO Matt Singer and other students. Sunny Clean Water is working with a Chinese company to scale up manufacturing.

These efforts, taking place around the world, are just a few examples of how SUNY’s interdisciplinary, pioneering research efforts are discovering solutions, creating knowledge, and improving our world.