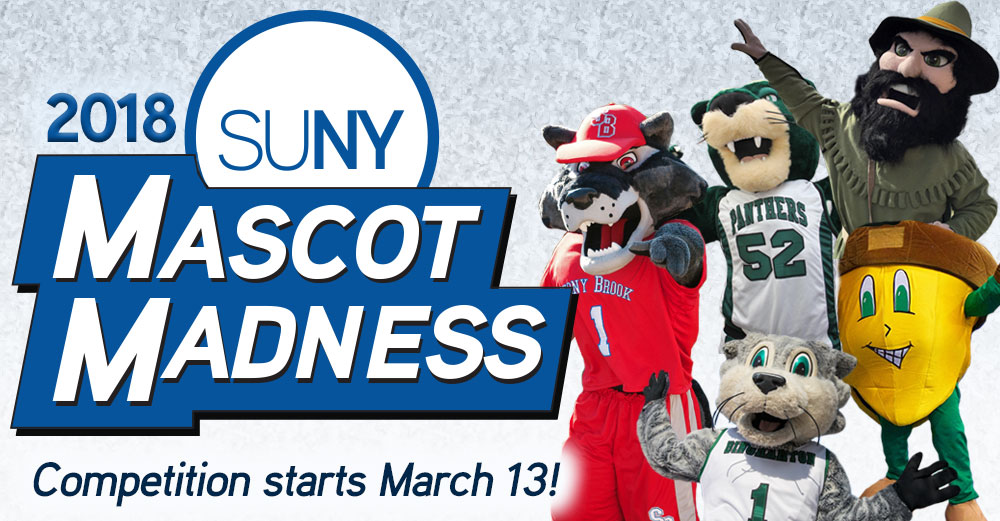 Do you feel that? Crisp air that is hinting at the coming spring along with college basketball tournament season signaling the end of winter. And with those comes the annual SUNY Mascot Madness tournament – the competition to find New York’s favorite college mascot! It’s your chance to learn all about the personalities of our campus representatives. Who are they, what are their likes/dislikes? On Monday, you’ll be able to learn all about our competitors, where you’ll be sure to find a mascot that matches your personality and deserves your vote.

The tournament is back for it’s 6th edition this year and ready to keep on expanding to newer, bigger heights. So let’s get through some of the important info. Round 1 voting kicks off on Tuesday, March 13. The schedule for the entire tournament is as follows, by round:

Who gets your vote?

The personalities of our mascots range from the brave to the intelligent and creative, bringing a mascot representative everyone in New York can favor. You can learn all about all 36 participants to help you make the best choice for New York’s favorite mascot.

Voting will all take place here on the SUNY Big Ideas blog. This year, social media voting is coming back to the tournament during the last two rounds, allowing those that make it to the final four and finals the chance to gather their friends and followers on Twitter to help raise their vote totals. Those details will be released when the Final Four begins on March 28.

As we enter the sixth season of the Mascot Madness tournament, we can take a look back at the past winners and how they got there.

So who will win this 2018 edition? The answer is unknown, but there’s only one way to find out. Log in and start voting next week!