New Student Assembly Leadership Is Ready To Get To Work 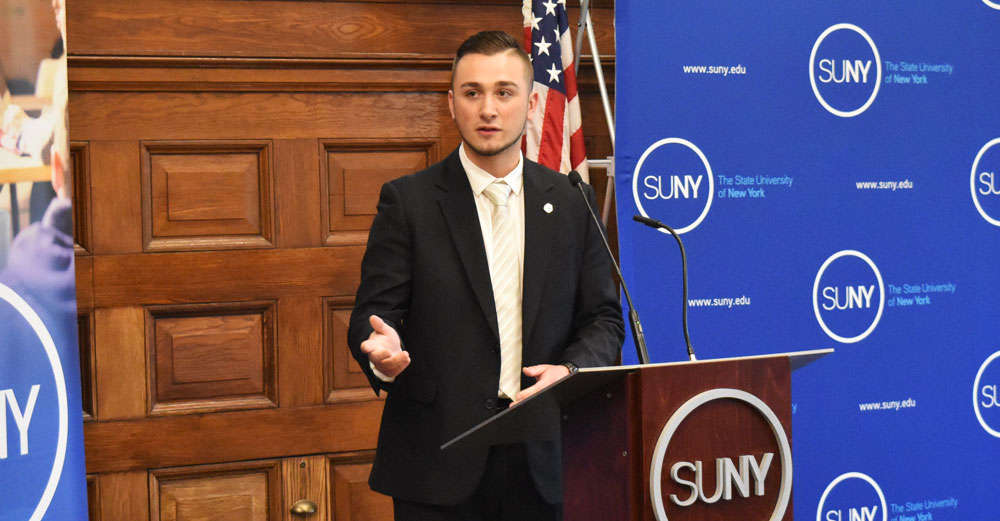 One of the key elements of the governance of SUNY is the student voice. With more than 400,000 students enrolled on campuses across New York and hundreds of thousands more committed to online learning, there are a lot of voices needing to be heard to make the college experience the best it can be for all. The SUNY Student Assembly (SUNYSA) and their executive leadership team fill this critical role in representing the voices of our hundreds of thousands of students. And as is customary, the executive leadership team of the SUNY Student Assembly has their annual elections every spring to find the next wave of student leaders.

Meet Michael Braun, the newest president of the SUNY Student Assembly and the newest member of the SUNY Board of Trustees. This past year, Mike served as the SUNY Student Assembly Chief Financial Officer/Treasurer under outgoing president Marc Cohen. He is beginning his second-year as a graduate student at the Rockefeller College of Public Affairs & Policy at the University at Albany, pursuing a Master’s Degree in Public Administration (MPA) with a concentration in Politics, Policy, and Institutions. His passion and interest in policy began at a very young age when he volunteered on his first political campaign in his hometown of Elmont, down on Long Island.

Despite beginning at SUNY Cortland as a kinesiology major, Mike’s interest in advocacy led him to switch his major to Political Science, opening a variety of opportunities through his educational path. While at SUNY Cortland, Mike served as Student Government President, President of the Interfraternity Council, and Parliamentarian of the Student Government. He ultimately graduated from SUNY Cortland with a bachelor’s degree in political science. Through his years of study, he has traveled to Europe for Model European Union, interned in Washington D.C. for North America’s Building Trades Unions, and interned in Albany for United University Professions, the union that represents SUNY faculty and staff. Throughout Mike’s life, he has continuously sought opportunities to grow and progress as a leader.

It’s early in the year, and Mike hasn’t even officially begun his term yet – that starts on June 1. But Mike’s priorities for the year as President are starting to form. He hopes to strengthen the Student Assembly network, continuously improve advocacy activities and impact, develop student leaders and build organizational capacity. These four main goals can be broken down into initiatives, such as revamping procedures for recruitment, strengthening relationships with key advocacy partners, and building a physical presence on each campus while developing resources for their student governments.

We have a lot to look forward to with Michael as President of the SUNYSA. His personable and professional demeanor will continue to carry the SUNYSA forward as leaders and help the student voice be heard. And in between the work of governance and advocacy, he will do his best to maintain his own student life experience with his classmates at UAlbany, like with pizza and games after long study and governance sessions. Fun fact – Mike’s favorite pizza topping is pepperoni!

Along with Mike, other Student Assembly executive leadership positions also had elections for the upcoming academic year. Nicole Pereira, from Baldwin, NY, will be continuing in her role as Vice President for another year. Jacob Webster from New Hartford, NY has been newly elected as the Chief Financial Officer/Treasurer, and Messiah Gaymon from Farmingdale, NY has been newly elected as the Secretary for SUNY SA.