viagra in australia for sale

An International Journey to College Was His Goal. Now He’s Making the Most of It. 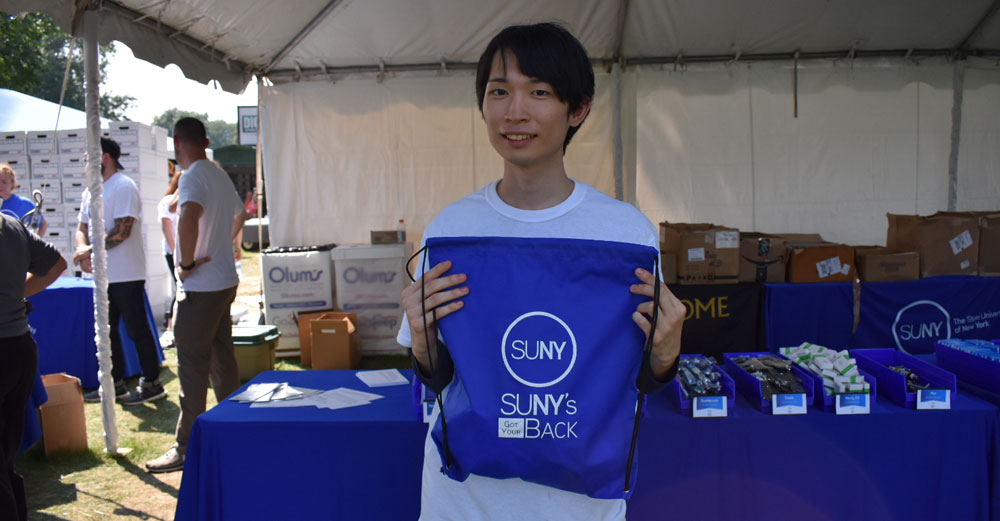 With nearly 1.4 million students taking courses across our 64 campuses, each of our students has a unique story to tell about their lives as a member of the SUNY family. Daiki Yoshioka, who is from Japan, is just one of our many international students who decided to call SUNY his home, twice over in fact; he started off his academic career at Rockland Community College and he now attends Binghamton University.

We first met Daiki at a SUNY’s Got Your Back event this past August at the 2018 Dick’s Sporting Goods Open in Endicott, NY, where he was volunteering as a member of SUNY’s Student Assembly. Daiki was such a dedicated volunteer throughout the day, working tirelessly to ensure that we reached our goal of filling 5,000 bags that day and we were inspired by his hard work.

Daiki’s journey to becoming a student in the United States began in China, where he went to an American school and studied English very rigorously. Daiki notes, “… sometimes, I still cannot believe that I am studying in my dream country and am using the language that I love.” He felt drawn to American society as well and found that he would better thrive in the United States.

Academically, he wanted the option of pursuing a liberal arts education, and Japanese colleges do not commonly offer a liberal arts education. Leaving his entire family behind in Japan, Daiki traveled to Suffern, New York to begin his studies at Rockland Community College, which particularly piqued his interests due to their Sam Drapers Honors Program. After graduating from Rockland Community College, Daiki had his sights set on Binghamton University because he wanted to continue his education at a SUNY school.

We had the chance to discuss Daiki’s journey and his goals with him. Read on to hear all about his experience at SUNY Binghamton and why he decided to get involved in Student Assembly and serve as a volunteer for SUNY’s Got Your Back.

What are you majoring in at Binghamton University?

I am double majoring in Comparative Literature and Philosophy.

What year in school are you?

I am a junior.

Why did you decide to attend Binghamton?

I previously attended Rockland Community College (RCC). I chose Binghamton because of its academic recognition, affordable tuition, and transferability of my credits.

How has your experience been at Binghamton so far?

My experience at Binghamton has been great. Not only have I made friends with different backgrounds and interests, I have also been able to challenge myself to the fullest and test my abilities. Additionally, Binghamton has many resources and events to help students succeed and enjoy non-academic lives. Binghamton has already been like a home to me, and I am confident that I chose the right school.

Why did you get involved in Student Assembly?

I first found about SUNY’s Student Assembly while I was taking a gap semester upon my graduation from RCC and was doing an Optional Practical Training (OPT), which allows international students to work full time. When I was at RCC, I met many students who were struggling academically and/or financially. I wanted to make SUNY a more equal space for all of our students, so I applied to get involved in the Assembly instantaneously.

What is your role in SA? What are the responsibilities of your role?

My primary role is the undergraduate representative for doctoral-granting institutions. I represent the undergraduate populations at Binghamton University and the University of Buffalo. My work entails ensuring that the voices of student communities at both campuses are heard by the Student Assembly. I also belong to the Diversity, Equity, and Inclusion Committee as well as the Academic Affairs Committee. For the latter, I am serving as a secretary.

Why did you decide to help out with SUNY’s Got Your Back?

I first learned about the event from our Vice President, Nicole Pereira. I subsequently did a bit of research and was very moved by the mission of SUNY’s Got Your Back. The situation is bit different, but my family has had a hard time since three years ago. I understand the pain of struggle and helplessness while being in a challenging situation, so, I wanted to help those who are experiencing life struggles and seeking help. I am very glad that I had a chance to get involved and hope our bags will heal and empower those who receive them.

Why should other students get involved with SUNY’s Got Your Back?

I would recommend other students to join SUNY’s Got Your Back for a variety of reasons. First, there are a lot of people who need the bags – the fact we hope to pack 25,000 bags a year tells us the massiveness of the issue at hand. Second, it is a way to learn about the issues of domestic and interpersonal violence.  I believe it is a gateway for students to learn about domestic and interpersonal violence and to start taking actions to combat the issue. Lastly, volunteering is fun! While vigorously packing bags, I have bonded with other like-minded volunteers and felt that we were united. At the end of the day, we felt very accomplished and connected, so I’d suggest that students come and join us next time!

What is your favorite thing about being a SUNY student?

My favorite thing about being a SUNY Student is the sense of unity. SUNY is comprised of 64 campuses and 600,000 full-time students. I have been very fortunate to have a chance to travel to different SUNY campuses in my past two years. Although some campuses are very far away from the ones I have attended or am currently attending, I still feel that we are connected by being a part of SUNY system. SUNY’s Got Your Back also made me feel that SUNY is united, given that volunteers came from different locations all over the state. I love SUNY and am glad that I had a chance to get involved in the community.

What’s your plan after graduation?

After I graduate, I am hoping to find a job in the United States so I can keep living in the country that I long aspired to come to. Given that I am an international student studying the humanities, I know it will be very tough. However, I really love the United States now and aspire to give back as much as I can. I am still exploring career opportunities, and remaining in the United States would definitely be one of my biggest challenges. But I am certain that my positive mindset and hardwork will one day help me reach my goal.

Julie is the assistant director for student mental health and wellness for SUNY System Administration.