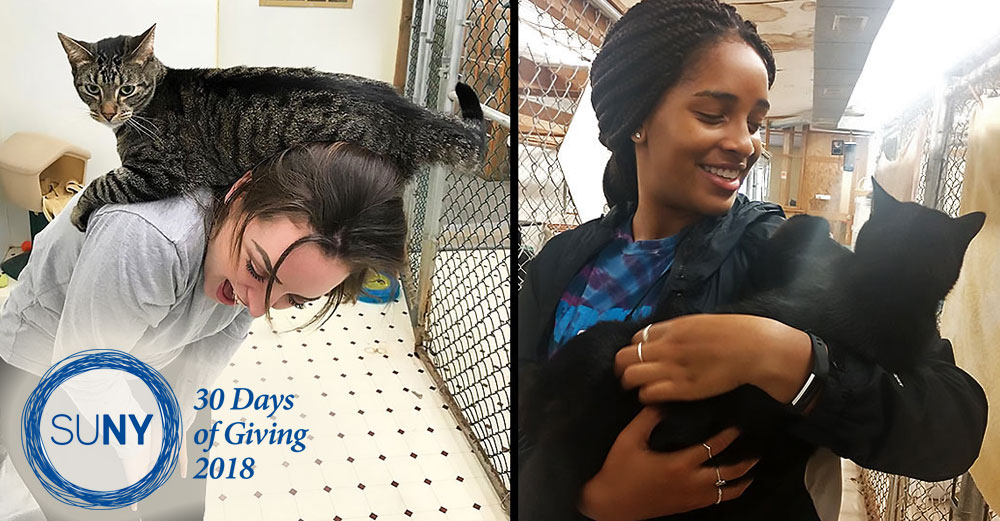 Students at Binghamton University are dedicated to supporting local animal shelters through volunteering and fundraising. Paws and Effect started out as a small group of friends and has become Binghamton University‘s only club that lets students volunteer with animals on a regular basis. A very new organization on campus, Paws and Effect has yet to be officially chartered by the Student Association, meaning they do not have a budget of their own, and the resources they do have are very limited. Despite such obstacles, the e-board members of Paws and Effect have dedicated themselves to providing students with opportunities to become active in the community while working hard to keep up with the large amount of interest in their club.

Part of what inspired the development of Paws and Effect, according to Sarah Buerker, a senior double major in sociology and economics and also the club’s vice president, was the lack of a “volunteer-oriented animal group” on campus. While there are other animal-centered organizations at Binghamton University, each with great missions and goals of their own, Paws and Effect has differentiated themselves by providing students opportunities to have hands-on experience helping animals. For now, there are two main sites Paws and Effect works with, Project Paw and Willow’s Wings, although Buerker and her fellow e-board members have been reaching out to more organizations with the hope that they will be able to expand opportunities for students in the near future. Project Paw is a no-kill cat shelter located in Binghamton that is heavily reliant on the assistance of volunteers. Paws and Effect contributes to this shelter by taking student volunteers on a weekly basis to help clean the facility, which is a very important task, especially considering the large number of cats Project Paw houses. With roughly two hundred cats living in the shelter, everything needs to be scrubbed and cleaned frequently, such as the cages, walls and floors. In addition to the physical labor aspect of their volunteer work, Paws and Effect members also spend time with the cats, providing them with much needed love and attention.

Willow’s Wings, on the other hand, is a nonprofit animal sanctuary and rescue located on a farm in Endicott. Like Project Paw, Willow’s Wings relies on volunteers to assist in keeping the property well-kept. Members of Paws and Effect assist in many different tasks, such as cleaning the cages and stables, stacking hay, and things of that nature, while also spending time around all kinds of animals. According to senior integrative neuroscience major and Paws and Effect’s treasurer, Kelly Sisson, “Willow’s Wings has everything from cats, dogs, horses, goats, donkeys, birds, alpacas — you name it, she [Willow Sullivan, owner and creator of Willow’s Wings] probably has it.” In addition, Sisson says, “A lot of the animals at Willow’s Wings are disabled.” She gave an example of some dogs needing wheels to get around, as well as one dog that has a neurological disorder.

The e-board members of Paws and Effect pointed out that while their volunteer work at Willow’s Wings and Project Paw may be strenuous, they truly enjoy the time they spend helping these animals. Maxine Riter, a junior integrative neuroscience major and the publicity chair of Paws and Effect, says, “Wherever we go [to volunteer], a lot of it comes down to physical work, like getting down on your knees, scrubbing things, stacking bales of hay, lots of physical things. We get dirty, but it’s really fun.” Another way in which members of Paws and Effect help support animals that is less hands-on but of equal importance, is by fundraising for these two organizations in which they volunteer. The president of Paws and Effect, Dana Schroeder, a senior studying biology, points out that while “it’s so easy to get people to come and volunteer because you get to see the animals, you get to play with them,” it’s much harder to get people to contribute to this aspect of fundraising for the shelters. Schroeder explains that they have recently added a new e-board member, Nia Brown-Fonrose, a sophomore also studying biology, to be the club’s fundraising chair, “because it’s such a big job to get people motivated to help with fundraising and donations and things like that.” Schroeder stresses that the shelters are always in dire need of supplies, and that they are working on expanding their fundraising efforts and hoping to get more people to contribute in this regard.

Paws and Effect has recently experienced what Schroeder refers to as “exponential growth,” in students who wish to become a part of their organization. And while they have faced difficulties with the process of becoming fully chartered, each e-board member stresses that they are still accepting new members and have been working diligently to make more opportunities available to students who share the same passions as they do for animals. 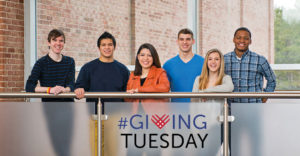 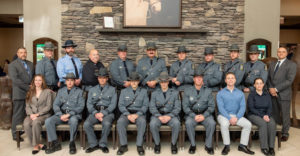