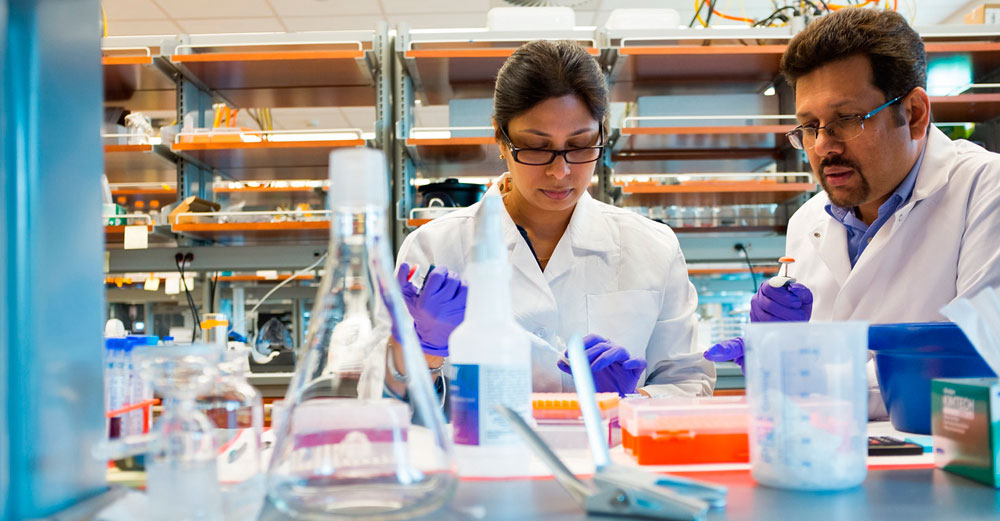 Eliminating dengue fever and other devastating tropical diseases, improving healthcare delivery to remote locations, and addressing malnutrition among victims of natural disasters. These are among the many lofty goals of the faculty, staff, and students across the SUNY system whose aim—through their research and education—is to improve human health across the globe.

Established in 2015, the Global Health Institute (GHI), funded in part by the Networks of Excellence program within the SUNY Research Foundation, is serving as a hub for these men and women to collaborate and to become even more effective at solving problems associated with global health.

“Researchers on SUNY’s campuses are doing some exciting work in global health,” said Gene Morse, associate director of the New York State Center of Excellence in Bioinformatics and Life Sciences at the University at Buffalo and co-director of the GHI. “By bringing these investigators into a network, we help new initiatives get started.”

Indeed, by combining their expertise, faculty, staff, and students across the SUNY system and their global partners are making a difference in the lives of people around the world. Here, we describe some of the initiatives currently underway.

Ebola virus is another fatal disease affecting those around the globe. In fact, it’s so deadly that a single outbreak in West Africa in 2014 killed 11,315 people and took 21 months to contain. Mehmet Yigit, assistant professor of chemistry at the University at Albany, is leading a team to prevent future outbreaks by creating a rapid, low-cost technique for detecting Ebola virus and other deadly diseases.

“Overall the process takes about four to five hours,” said Yigit. “Compared to current standard Ebola detection methods, which take several days for results, this is a remarkable improvement.”

According to Yigit, Ebola virus isn’t the only disease his technique can address. Any disease for which biomarkers can be identified can be analyzed in this way, he noted, including cancer.

To date, no licensed dengue vaccines or antiviral therapies exist. With a $12-million grant from the U.S. Army, researchers at Upstate Medical University are changing that; they are developing a vaccine against dengue fever.

In its FDA-regulated clinical trials, Upstate is infecting volunteers with a mild version of dengue to see how their immune systems respond. They plan to use this information to develop a vaccine that protects people from all strains of the virus.

In an article on Syracuse.com, Timothy Endy, chief of infectious disease at Upstate, explained that the mosquitoes that carry and transmit the dengue virus are commonly found in tropical and subtropical regions throughout the world. As such, he says, “It’s a military threat to U.S. soldiers.” For example, he added, “Several soldiers deployed to Haiti and Somalia have been infected.” The disease even has made its way to our home turf—it is a growing threat in Florida and Hawaii.

But it is the world population at-large that will benefit from Upstate’s vaccine. Said Rep. John Katko, R-Camillus, the partnership between Upstate and the U.S. Army “capitalizes on the talent of renowned doctors and researchers right here in Central New York, while taking major steps forward to address a critical global health threat.”

Many locations in West Africa, where the 2014 Ebola outbreak took place, and others around the globe are hard to reach and, as such, the people there have difficulty accessing healthcare. But remoteness is no longer an excuse to ignore certain patients, according to researchers at SUNY.

A team led by researchers at Stony Brook University is using drones to improve healthcare for vulnerable rural communities where delivery of care is hampered by poor or non-existent roads. The team recently completed the first-ever series of long-range, fully autonomous drone flights with blood and stool samples. The samples were flown from villages in rural Madagascar to Stony Brook University’s Centre ValBio research station for further testing.

“The flights to and from villages in the Ifanadiana district [of Madagascar] usher in a new era in bringing healthcare to people living in really remote settings,” said Peter Small, the founding director of Stony Brook’s Global Health Institute. “In this context drones will find innumerable uses such as accelerating the diagnosis of tuberculosis and ensuring the delivery of vaccines.”

In addition to conducting research, SUNY faculty and staff members are educating the next generation of global healthcare researchers and providers. For example, the University at Albany School of Public Health offers a fifteen-credit Graduate Certificate in Global Health Studies. The certificate is designed to equip graduate students, doctors, and other public health professionals with an in-depth understanding of the complexities and realities of global health. Participants of the program enhance their capacity to design, manage, support, and evaluate global health interventions.

Future healthcare providers also get training in global healthcare at SUNY. Medical students at SUNY Downstate can participate in an International Emergency Medicine Fellowship, which educates emergency physicians in the development of emergency medicine systems abroad, international humanitarian work in emergency medicine, disaster medicine, and global public health. Fellows complete a two-year curriculum that includes a Master’s in Public Health from the SUNY Downstate School of Public Health, participation in and leadership of active international projects, and development of new project proposals.

SUNY Downstate has sponsored a six-to-eight week “Global Health in Developing Countries” elective for fourth-year medical students since 1980. Since the elective’s inception, 435 students have provided medical services and observed health care and health delivery systems in 41 low-income countries. The most popular sites include the Dominican Republic, Guatemala, India, Kenya, and Thailand. Participants have worked in settings as diverse as large city hospitals and remote rural clinics. One was privileged to assist Mother Theresa in caring for the sick poor in Calcutta.

The elective is administered by Dr. Monica Sweeney, director of Downstate’s Center for Global Health in the School of Public Health and a 1975 graduate of Downstate who spent her entire fourth year of medical school in Bogota, Columbia. Dr. Sweeney notes that Downstate’s students are especially experienced in cross-cultural understanding because of the unusual diversity of the patient population in Brooklyn.

Much of the clinical training Downstate students receive involves extensive exposure to patients from countries in Africa, Asia, the Caribbean, and Central and South America. In the global health elective, students provide care to patients with illnesses common in the United States, but also see patients with metabolic and genetic diseases, congenital malformations, neurologic disorders, and tropical and parasitic diseases rarely seen in a U.S. clinic, as well as treatable conditions that have become acute because of the lack of access to care.

“Over the years, student participants have rendered valuable medical service to the world’s poor, been goodwill ambassadors for their school and country, and given solace and hope to those most in need – all very strong testimony to the dedication commitment of these young people,” says Dr. Pascal James Imperato, Downstate’s senior vice president for academic affairs and founder of the global elective. The elective reflects the experience Dr. Imperato gained while working for six years in West Africa as an epidemiologist with the Centers for Disease Control and Prevention.

The opportunities for students to learn about global healthcare challenges in the classroom abound. In addition, their on-the-ground research contributions across the globe further bolster SUNY’s global healthcare enterprise. Working together, faculty, staff, and students from across the campuses, along with their international partners, are making major strides to help those in need throughout the world.