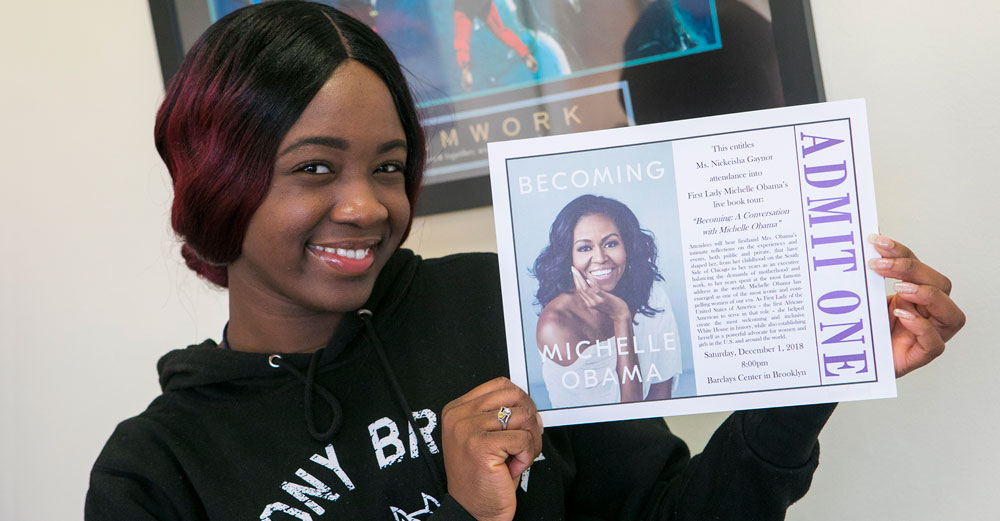 “I just want to say Thank You! Thank You! Thank You! Thank You —Sooo Much!!!!” Stony Brook University senior Nikeisha Gaynor shed tears of joy upon learning she was being given a free ticket to attend Michelle Obama’s much anticipated national book tour. The former first lady will appear at the Barclays Center in New York City on December 1 to promote her inspiring new memoir, “Becoming”.

EOP senior, Nickeisha Gaynor, was surprised with a ticket to see Michelle Obama on her book tour! She’s one of EOPs many high-achieving students, and happens to be the president of EOP’s Student Association. Congrats! ? ♥️ #becomingmichelleobama @michelleobama pic.twitter.com/v0Um8Hbaxq

Gaynor received one of fifty tickets given to SUNY’s Educational Opportunity Program (EOP). In a news release announcing the giveaway, Mrs. Obama said she wanted to make the tour accessible to as many people as possible. “I want them to see themselves in my story — to see the value in the fullness of their lives and to imagine who they might become in the years ahead.”

EOP serves a racially diverse population of low-income, primarily first-generation college students who possess academic promise, but whose life circumstances have not permitted them to reach their full potential. Nearly 11,000 students participate in the program on 48 of SUNY’s 64 campuses.

Gaynor, a student leader who excels in her studies was selected by Stony Brook’s EOP director. “This is the kind of statement that encourages students to go way beyond their capabilities and right now, you all have uplifted me to the point where I just want to continue giving back and do greater things,” said Gaynor.

Amazing! @MichelleObama wanted to make events for her book “Becoming” as accessible as possible, so she’s given away complimentary tickets. EOP students across @SUNY will attend, including #DCC student Latishe Thorpe! Congrats, Latishe! #IAmBecoming pic.twitter.com/vRdU28Ubjd

Dutchess Community College took a different approach. EOP students were asked to write about famous women who have influenced their lives. They were told their responses would be used in a SUNY campaign celebrating women of excellence, with no mention of Mrs. Obama or her book tour. Latishe Thorpe, a non-traditional student who is a mother of five wrote about the former first lady. “Michelle Obama is the epitome of what a strong woman is and does. For me, she affirms that it is possible to make positive changes even when it feels like the world is against you.”

EOP has promoted the success of underserved populations for more than fifty years. 72 percent of EOP students enrolled in a four-year institution complete a bachelor’s degree within six years, exceeding the rate achieved by national public institutions overall.

Stay tuned for follow-up reports after the December 1st event ends. These students are excited to share their experiences.