30 Days of Giving 2018 – Bonus: A Selfless Act of Giving at Rockland Community College 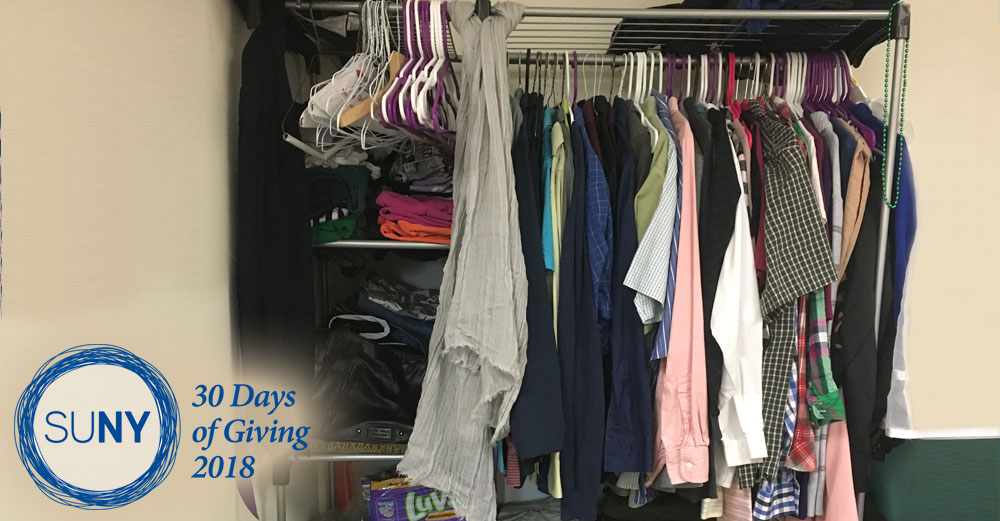 One day this semester, a Rockland Community College student was completing his Service Learning hours at the RCC Haverstraw campus, which houses the new Volunteer Generation Fund food cupboard. Jose was activity in volunteerism around campus. Part of his responsibility was to manage the recently opened food cupboard, which is open to all students and visitors to the Rockland County Career Center, which is also housed in the same building.

One evening, during an especially cold and windy November night, an older gentleman came in looking for food. The student engaged the senior community member in conversation and noticed that he was not wearing a coat or hat. Jose began to think that if the man was there to collect food then there was a high probability that he also needed clothes.

This new food cupboard also has a clothing rack for clothing insecure visitors. The student invited the older man to take a look at what was there. As he looked, Jose noticed that there were no coats available and became emotional at the thought that this man was going to go back out in the cold with nothing to protect himself.

At this point, Jose offered his own coat and hat to the gentleman. The surprised senior was so appreciative of the student’s personal generosity and kindness, that he burst into tears. Jose gently told him that he had another one and that he was more than happy to be able to make a difference.

During a time when there are so many people in communities throughout New York with food and clothing insecurities, this selfless act really depicts the deep humanity residing in our students at Rockland Community College and the entire SUNY system’s 64 colleges and universities. These kinds of stories show us that when we expand our horizons beyond the textbook, a college experience teaches us so much more than just what happens inside a classroom.