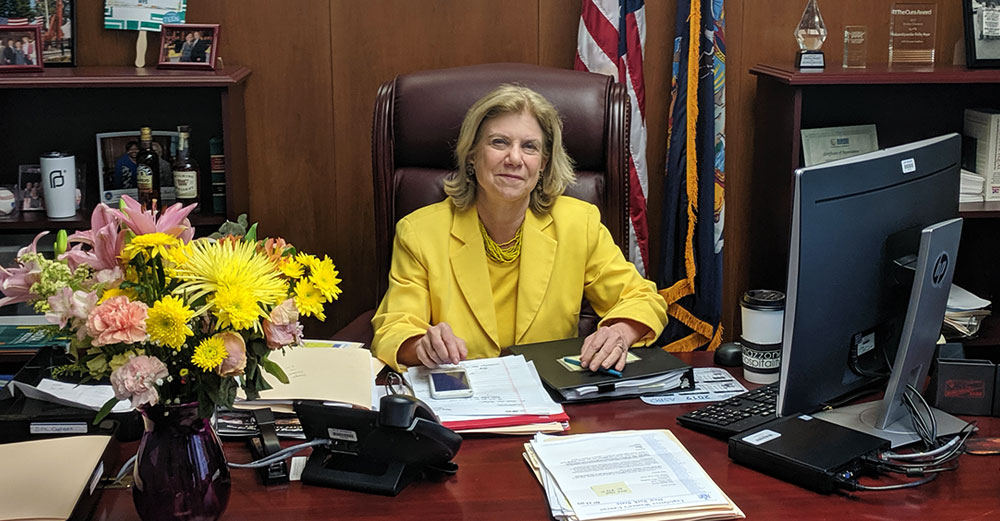 As the largest comprehensive system of public higher education in the country, the vast number of alumni graduating from our schools are bound to be part of the present and future of New York State government. Currently, 61 alumni serve in the New York legislature, in both the state assembly and state senate, and also participate on many committees.

Shelley Mayer is a Democratic member of the New York State Senate who represents the 37th District in Southern New York, which includes portions of Westchester County. She is the Chair of the Committee on Education, and serves on the Labor Committee, Elections Committee, Legislative Women’s Caucus, and five additional committees. Before being voted into the Senate, Shelley served in the Assembly from 2012-2018 where she was re-elected three-times.

Prior to her time in government, Shelley spent many years practicing law on a number of levels. She began her legal career in private practice focusing on family law and workers’ rights. She later spent 12 years as an Assistant Attorney General in the office of New York Attorney General Bob Abrams, where she focused on women’s rights issues, civil rights, landlord tenant and consumer protection.

What does Shelley credit as being most important to her success in public service and the practice of law? Her education and time she spent at the University at Buffalo School of Law. Shelley stated “Buffalo was a hotbed for progressive issues in the late 1970’s.” It was her time at UB that allowed her to take her passion for civil rights and public service into a profession, where helping people was the main priority. She received her Juris Doctor degree in 1979, after which she immediately began practicing law in the Buffalo region.

Although law has been the focus of her career, it wasn’t the only passion of Shelley’s. As a young girl, she had a love of dance and came close to pursuing a career in dance and performing arts. But while she loved dance, she always had an interest in politics and law. Her father ran for the New York Senate in 1960 but lost. It was around that time that she learned of her generation’s hunger for social change, and eventually wound up bringing that passion with her to college.

While in law school at UBuffalo, Shelley found a job at a small local law firm in Buffalo, which primarily handled cases for union workers; men who worked on trains and female school bus drivers. These were “real life cases,” as Shelley refers to them, and these experiences show both the benefit of participating in applied learning opportunities while at school and the value partnerships between the SUNY system and our state labor force can bring to students. Shelley believes these experiences not only shaped her career but she never forgot them.

“I still carry them with me,” Shelley explained. “Going to family court every day and fighting for people who were nervous and afraid and had so much on the line… They had very little, but everything they had was on the line. That’s the same thing as when you represent people (in government) and your interest is in their lives.”

This lesson is how Shelley stays involved with issues like family/child care, consumer safety, and environmental protections today, and supports legislative action to help these causes.

Love and friendship at UB

The lessons learned while at school at UB Law are ones that Shelley holds dear today, and makes an effort to help current students experience the same. For instance, she was the founding member of the Western NY Women’s Bar Association when she graduated (40th anniversary this year). Shelley even has a connection of women from the UB Law school who formed a mother’s group who get together every year and have been doing so for 38 years.

Along with lifelong friends, Shelley was lucky enough to meet her husband, Lee Smith, during her time at UB Law. She recalls how both she and her husband were early morning students at law school who would often run into each other in the library during morning reading and study sessions. It was during one of these morning visits that they first struck up a conversation that turned into much more as time went on. She recalls how “He was a better student than me, but thankfully, I was a better at reading complicated law school stuff at 7:30 in the morning than I was at nine at night.”

How does a SUNY experience guide your future?

Based on the opportunities afforded to her during her time at SUNY, we asked Shelley what she would tell the current generation of students attending or planning to attend a SUNY school for any degree option. After all, her experiences give her much to talk about.

“I’m a huge SUNY booster, not only because of my experiences then, but as an elected official. It’s not just the affordability. SUNY is an incredible group of schools that offer so much opportunity. From my experiences, I can sum it up in four parts – one, high quality. Two, affordability. Three, a commitment to excellence. And four, very much a sense that you are a part of a community.

“By attending law school through the SUNY system, both my husband and myself, we both had very little debt at the end of it. We were able to jump into low paying jobs that we cared about and work our way up. We got a world class education that gave us enormous opportunities that we are extremely grateful for.”