A Continuing Effort At Fighting Food Insecurity and Homelessness 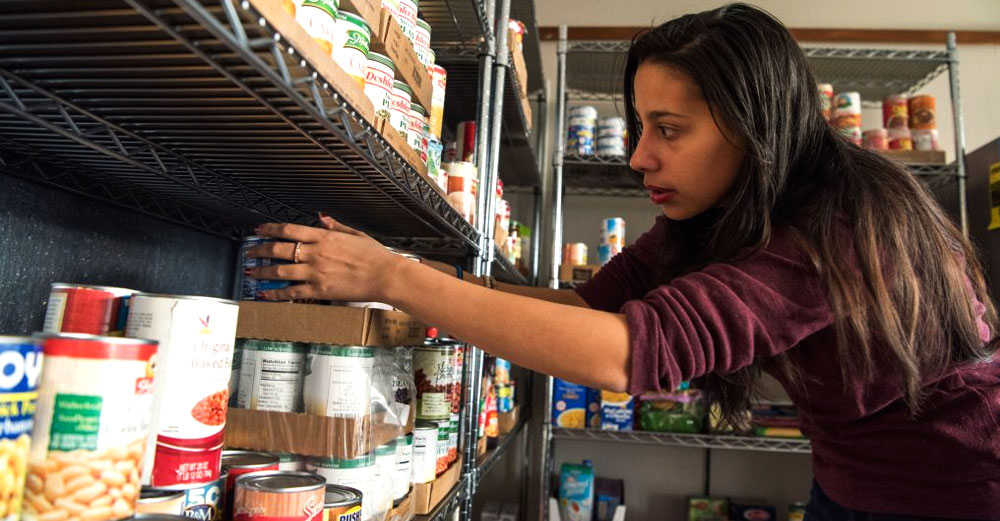 It is well-known that many students throughout the country have to overcome a variety of obstacles in order to complete schooling and achieve their degrees. What may surprise you is that approximately half of college students experience a lack of regular access to food, and approximately one third of two-year students regularly lack housing. Food and housing insecurities present what can feel like insurmountable challenges to a student’s ability to succeed academically and graduate. Sometimes these challenges are closer to us than we realize. 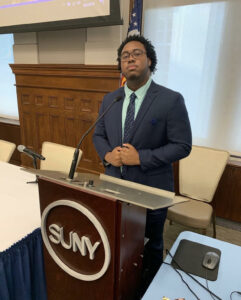 Bryce Mack, the Nassau Community College Student Government President and a member of the SUNY Student Assembly Executive Committee has experienced food insecurity in his life. This past semester, Bryce, his mother, and his grandmother were faced with homelessness. Through the support of his community, the usage of his campus food pantry, and determination, Bryce’s family got back on their feet. Today, Bryce is a fierce advocate for food and housing security programs in colleges throughout New York State. Bryce spoke at the most recent SUNY Student Assembly conference to nearly 450 students about his struggles and achievements, passing on an inspiring message to everybody there.

“No matter how hard things seem, never give up. You must go on, so that you can make a difference for someone else who may be experiencing the same struggles as you,” Bryce said, “I hope that my story has shown you that homelessness can happen to anyone and that my situation did not define me and you situation won’t define you.”

Bryce is very open about the importance of on-campus resources in helping him persevere through the adversity he faced. What helped get him access to these resources?

The creation of the Food Insecurity Task Force 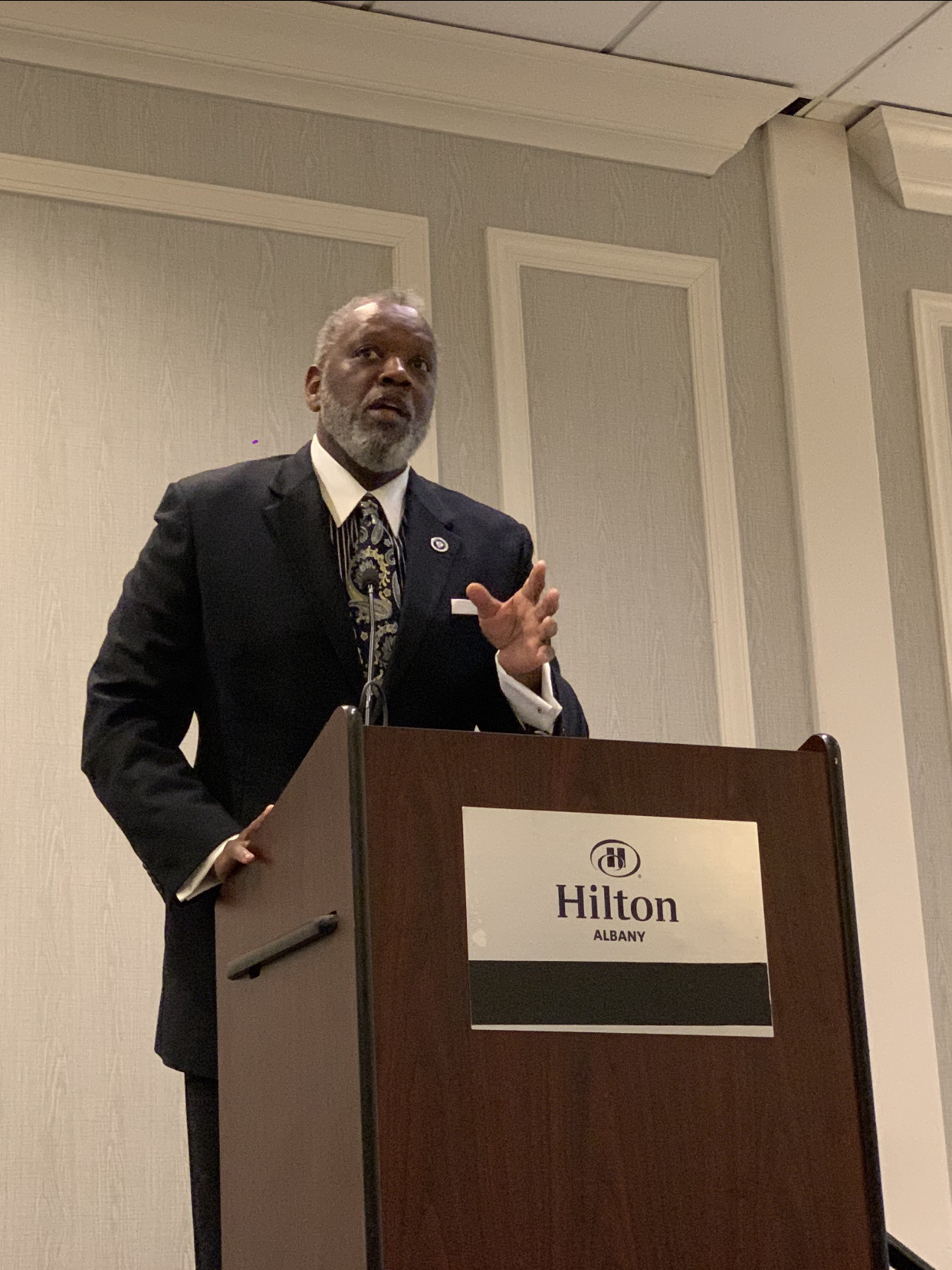 In August of 2018, Governor Andrew M. Cuomo announced the launch of the “No Student Goes Hungry” initiative, making New York the first state in the nation to have a comprehensive program to combat student hunger. This initiative mandated that all SUNY and CUNY schools have a food pantry or stigma-free food access for their students. Quickly following this announcement, and with the full support of the SUNY Board of Trustees and Chancellor Kristina Johnson, SUNY’s Student Life Committee launched the Food Insecurity Task Force. The task force is comprised of higher education leaders and students from across the university system, working hand-in-hand with experts in the fields of diet and nutrition, campus food service, financial aid, food waste prevention, and nutritional research scientists, among others.

In the first six months of its foundation, the Food Insecurity Task Force completed a system-wide assessment of hunger and food insecurity, created a template for SUNY college/local food bank MOU/MOA, charged subcommittees with individualized tasks, and signed food pantry commitments with all SUNY colleges that did not yet have a food pantry.

Now in Phase 3, the Task Force has completed their second system-wide assessment of hunger and food insecurity, drafted and submitted their report to the SUNY Board of Trustees, added reporting on student basic needs to campus-level data collected by SUNY, proposed policy and procedure changes to SUNY System, and are now preparing for the 2020 SUNY Conference on Student Basic Needs.

Through the leadership and support of Governor Cuomo, the Food Insecurity Taskforce, and campus Presidents across the system, all 64 of SUNY’s colleges and universities now have a food pantry or stigma-free food access available to their students as of December 2018. Their most recent report, released in September of 2019, provides some insight into other recent collaborations, projects, and research findings.

Recent initiatives throughout the system

Students, faculty, and administration alike are banding together to address this growing crisis. 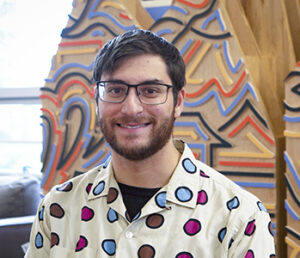 At Binghamton University, graduate student Ben Levine is quite literally “putting the issue of food insecurity on the map.” Moved by the struggles of his community, Ben created a map that shows when and where free meals are being held, as well as what other services are available at the same locations. Ben’s map is enhancing the accessibility of these services to students who may not otherwise be able to identify them on their own. Assistant Dean for Off Campus Services and Programs Milton Chester said “…what I’m most impressed with is that Mr. Levine saw a problem and took the initiative to address it without being prompted by anyone. He took the skills and knowledge he learned in the classroom and applied it to a real-life problem.”

SUNY Delhi has developed a proactive new program called “Swipe it Forward,” designed to address the reality of student hunger and food insecurity. This program, created in collaboration with Swipe Out Hunger, offers a discreet way for students in need to receive donated meals on their meal swipe account.

Community colleges throughout the system are creating ‘one stop shops’ where students can access an assortment of resources all in one discreet location. Mohawk Valley Community College’s College Community Connection (C3) connects students to SNAP benefits, on-campus meals, other prepared meals, and basic needs supplies. Onondoga Community College has increased the offerings and hours of their food pantry and established a partnership with the Central  New York Food Bank. Additionally, the campus has Food Link, which provides short-term food aid and connects students with community and government resources for long-term assistance. At Adirondack Community College, their Community Hub offers free groceries and personal care items to all students in need, as well as access to the SUNY CARES initiative, which connects students with numerous resources, such as emergency funds, transportation assistance, and SNAP referrals.

This week, for National Hunger & Homelessness Awareness Week, our 64 campuses are showcasing the important work being done to combat student hunger and homelessness. Recent research shows that between 61-66% of SUNY students are unaware of the programs at their disposal. The goal of this campaign has been to bring awareness to both the problems at hand as well as the resources available.

As we close out this week, we encourage all to remember that the advocacy doesn’t stop here. Share what your campus is doing to fight hunger and homelessness on social media with the hashtags #SUNYcombatshunger and #SUNYcombatshomelessness. Food and housing insecurity are problems that plague our campuses year-round, and it is crucial that everybody works together to support and engage their communities.