And the Winner of 2021 Mascot Madness Is… 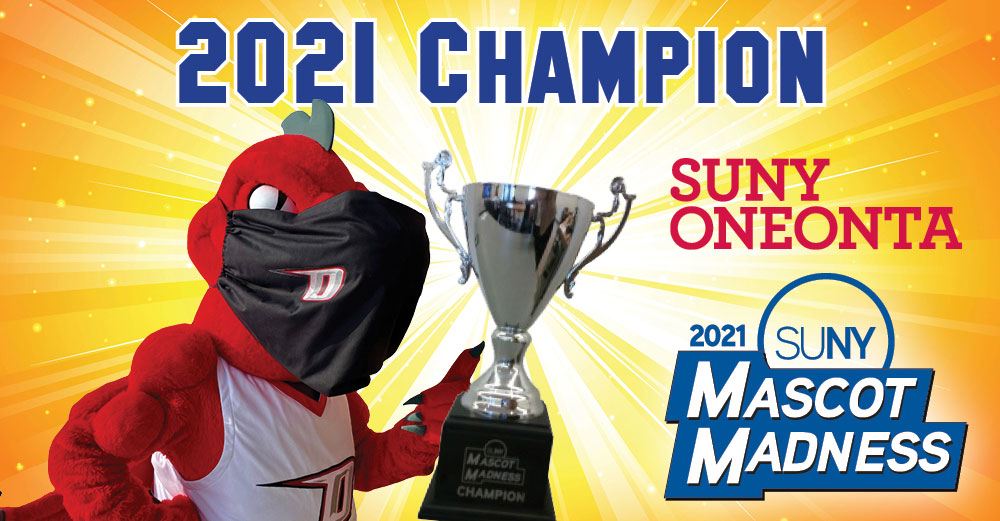 After a year that changed the college experience in some way for everyone, we found a way to begin a return to normal with the renewal of SUNY Mascot Madness, the tournament to decide New York’s favorite mascot. The eighth edition of Mascot Madness is now viagra prices in the books, and what a tournament it was. We had 34 mascots enter and they brought nearly 39,000 votes in to determine the winner.  A new champion was crowned at the end – Red the Dragon from SUNY Oneonta.

The final this year could be cheap price viagra referred to as a battle of the underdogs. Red, our champion, hadn’t participated in Mascot Madness since 2016. He took that time to recommit to the mascot game and that energy and effort was proven. Earlier this year, the SUNY Oneonta campus had to overcome issues with COVID-19 coming to campus which forced students home for the community’s and their safety. When students came back to campus in small numbers for spring semester, the student body didn’t lose their passion for their school.

On the other side, his opponent Boomer T. Cannoneer is a first time, rookie, ganeric cialis participant. Yet to make a formal debut in athletics, this bird used the Mascot Madness tournament as a springboard to show Jefferson Community College and all of New York that they are ready to be the best school supporter out there.

“Hatched” in February, Boomer hasn’t been able to attend a sporting event yet because of COVID-19. Boomer, however, has reached the finals of an online contest to pick SUNY’s favorite mascot. https://t.co/0VarWOHiKw

This year was indeed another year of the underdog. We saw new SUNY mascots making runs deep into the tournament and cheapest price cialis ultimately competing for the championship. Of our the competitors who made it to the final four, three of them were first-time semi-finalists, two of which were first-time participants in general, and the fourth was a first-time winner in the last edition of the tournament.

So how did we get here? Let’s take a look back through the tournament rounds to recap.

The finals gave us a back and forth battle that Red the Dragon was able to come out on top of. The final results, which included bonus votes earned through Twitter, were 2,639 to 2,006 in favor of Red. He becomes the sixth champion in the eight years the tournament has been held joining the other who represent schools from all over New York State.

Overall, this year’s competition had highlights from beginning to end. We saw SUNY Empire State’s Blue, just born last year, make her way to the final four with thousands of supporters in the early rounds. We saw support among our smaller community colleges exceed expectations, proving that communities in New York value their local community colleges. And most importantly, we saw that even after many students, staff, and alumni had to turn to remote learning and work environments and new safety guidelines during a pandemic, their spirit for SUNY schools is still strong.