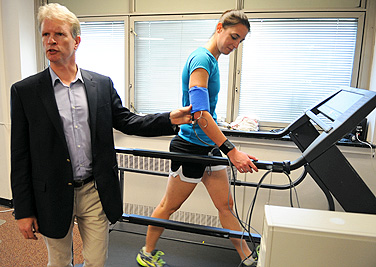 John Leddy, director of the Concussion Management Clinic, describes the treadmill test developed by UB researchers that helps to determine whether or not concussed athletes are ready to return to play.

University at Buffalo sports medicine researchers have been awarded $100,000 from NFL Charities to develop the most objective, scientific method of determining when an athlete who has had a concussion can safely return to play.

NFL Charities, the charitable foundation of the National Football League owners, has awarded the 18-month grant to researchers at the Concussion Management Clinic in the Department of Orthopaedics, UB School of Medicine and Biomedical Sciences. The grant to UB is one of 15 totaling $1.5 million that NFL Charities is providing to researchers nationwide to support sports-related medical research on concussion/traumatic brain injury and cardiovascular medicine.

Over the next 18 months, the UB researchers will test between 35 and 50 athletes from the Buffalo Bills, the Buffalo Sabres and athletes from Western New York colleges, including UB, who sustain concussions in the 2012-13 season. They will test healthy control subjects as well.

Physiological variables that will be tested during exercise in concussed athletes and healthy controls include heart rate, blood pressure, pulmonary ventilation, cerebral blood flow and other measurements that are impacted when someone has had a concussion.

Read more about the research in the UB Reporter.