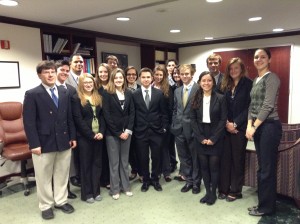 Sixteen SUNY Oneonta students spent part of their spring break at the National Model United Nations Conference in New York City. More than 3,000 students representing 150-plus colleges and universities from almost 30 countries participated in the conference from March 24-28.

This year’s delegation, representing Croatia, was one of 29 groups from around the world selected to receive the Distinguished Delegation award at the end of the five-day conference. This is a high honor, placing the Oneonta delegation in the top 10 percent of participants. In addition, Oneonta students Vanessa Griffith, Cady Kuzmich and Marybeth Carswell were recognized for writing the best position papers in their respective committees.

Over the course of the spring semester, students prepared for the simulation by learning about Croatia’s international and domestic politics, contemporary issues, and the United Nations’ committee system and operating procedures. While in New York City, the students received a briefing from the Permanent Mission of Croatia to the United Nations.

Once at the conference, they debated proposals put forth to address these issues from the perspective of diplomats of their assigned country. In addition to being part of SUNY Oneonta’s award-winning delegation, two students, Griffith and Nicolette Teta, served in conference-wide leadership roles as rapporteurs for two committees: the UN Development Program and the Human Rights Council, respectively.

“This is my second time doing Model UN and it gets better every time,” said Griffith, a Political Science/International Studies major from Buffalo. “It’s always fun meeting so many different people and working with students from all over the world.”

Max DeMagistris, a political science major from Staten Island, said attending the conference was “the best spring break I’ve had in my college experience.”

The Model UN delegation is advised by Dr. Brett Heindl of the Department of Political Science. Funding for the program was provided by the Office of Continuing Education, the Political Science Department and the students themselves. Some of the students also received travel funding from the Caroline and David D’Antonio Undergraduate Student Travel for Excellence Fund.