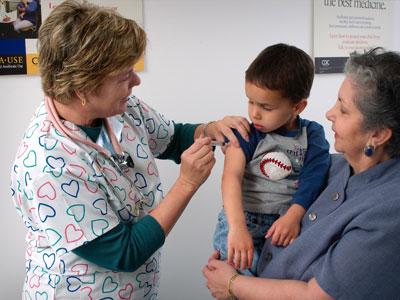 As the weather gets colder, we get closer and closer to flu season. Symptoms like coughing and chills will constantly surround us. But how can you avoid or rapidly battle influenza (“the flu”) altogether? After all, some influenza strain symptoms can be sneaky, making it harder to diagnose and start medication. Well, good news is here; new technology can now speed up diagnosis and provide the proper treatment quicker!

Traditionally, patients who experience symptoms of the flu (or, just don’t feel well) schedule a doctor’s appointment and make the drive across town to be diagnosed. The doctor sees the patient, and then reacts to the situation — and that usually involves giving them medicine. Then, the doctor moves on to the next patient while hoping that her previous will fully heal. This happens every single day, every single year, across the globe.

“Influenza is a disease where the predictable doesn’t occur and the unpredictable does,” Pascal Imperato, M.D., a renowned expert on infectious diseases and now dean of the school of public health at SUNY Downstate Medical Center in New York City, says.

But technology is beginning to transform this cyclical, repetitive process by anticipating flu symptoms and historically tracking cases using, in part, big data. The application of doing so has the potential to impact the way that the medical community may approach providing individual care and concentrating on preventing infection in certain regions.

These new “information streams” containing electronic health records, sophisticated lab testing and social media can help providers notice disease patterns and give early detection warnings when a virus has undergone changes. They have the potential to help providers recognize patterns even among people who don’t go to the doctor or the hospital, ultimately helping to produce a complete picture of the overall human toll and cost of a season of flu.

On the national level, tracking the geographical progression of a strain is critical to reducing its impact on population. The Centers for Disease Control, in collaboration with state health officials and providers, track essential information like the number of hospitals with influenza-like illnesses as well as hospitalization and weekly estimates on how widespread the flu is. One tool that the CDC uses, called digital disease surveillance (DDS), maps outbreaks of all kinds of infectious diseases, including influenza by using a multitude of news sources and data. Another tool that has been an aid to flu surveillance is Healthmap, a web site where individuals can sign up and report their flu status, has been an aid to flu surveillance.

On the local level, similar approaches are being taken with a bit more opportunity to pay attention to detail. Beth Nivin, influenza surveillance coordinator for the New York City Department of Health and Mental Hygiene, personally participates in HealthMap’s Flu Near You, and says her department has looked at analyzing Twitter feeds and using Google Flu Trends. The integration of social media and electronic health records has spread awareness and more importantly has given providers the data they need.

But Dr. Imperato warns that technology alone cannot stave the dangers of influenza — yet.  “Even with tracking, things come up that are a total surprise,” he says.

And that’s why academic medical research is so important.