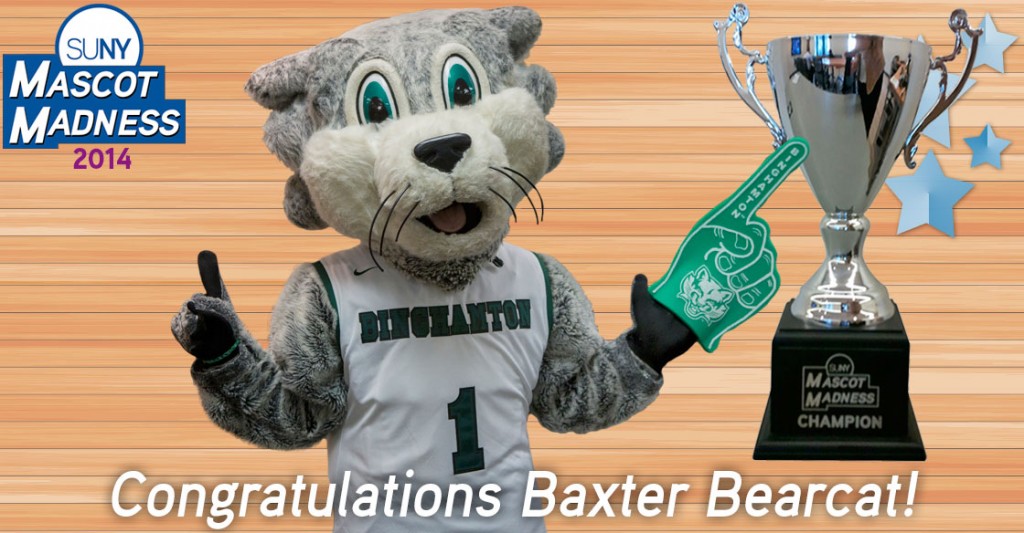 Through hundreds of thousands of online votes, Baxter of Binghamton University has been crowned champion of the highly-contested SUNY Mascot Madness 2014, just slightly beating The College at Brockport‘s Ellsworth Eagle in the final round of the bracket-style competition. Baxter collected 27,481 points by way of online votes and social media bonus points; Ellsworth defeated Baxter in an overwhelming fashion on social media, but could not keep pace in the poll and lost by just over 1%.

The competition brought hundreds of thousands of supporters to SUNY.edu, a perfect compliment to the launch of the new website in March. This is a 33% increase over the time during Mascot Madness 2013 last year, ultimately engaging more prospective and current students, alumni, and community members than ever before. In addition, more than 16,000 tweets bearing @SUNY #MascotMadness were sent; 19,100 “Likes” of the competition pages on Facebook were registered; and more than a dozen television, radio, and newspaper stories were generated across New York State.

Thank you to all who participated—and welcome to blog.SUNY.edu, your source for all-things #SUNY!

A little recap of the first four rounds:

Update: Photos were added on April 30, 2014 following the trophy ceremony in Washington, D.C. with Chancellor Zimpher and Representative Richard Hanna.