Breaking with Tradition for Increased Collaboration in Research 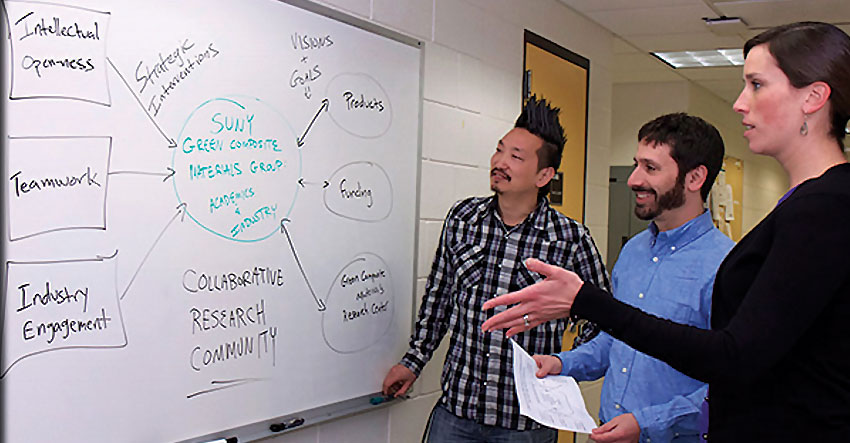 Chris Nomura looked over the list of researchers he needed to make into a team, the Green Composites Materials Group, that would develop energy-efficient ways to produce new materials and new manufacturing processes as part of the SUNY 4E Network of Excellence. They all had their own laboratories, their own points of view, their own agendas and their own egos. What was Nomura to do?

He called Paul Hirsch for advice. Hirsch said: Have them chase a ball.

Nomura grabbed a request for proposals and gathered the seven researchers from five SUNY campuses for an academic exercise in team-building. How, he asked, would the team develop these new energy-efficient manufacturing processes?

Ideas began to flow as the researchers got the feel for each other, until one suggested they had a solution, if they could develop a particular material. That material had already been developed by another’s lab. Suddenly, an academic exercise blossomed into an actual engineering solution.

That’s what the SUNY Networks of Excellence are meant to do – translate fundamental discussions into applications. The Research Foundation has dedicated $4 million to six different networks – each broken into smaller teams – to increase collaboration and develop more efficient ways to accomplish research. 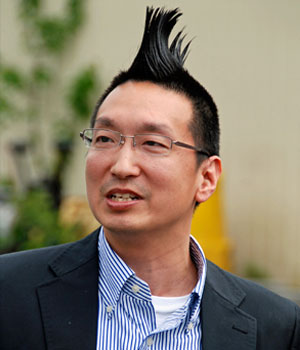 “In some ways, we have been traditionally competing with each other,” said Nomura, an associate professor of chemistry at the SUNY College of Environmental Science and Forestry in Syracuse.

The exercise Hirsch suggested was the first step to setting aside the old way of doing research. His approach draws on cognitive and social science. A basic strategy is to develop a “boundary object” – something meaningful for people on different sides of a social or intellectual boundary – to provide a touchstone for shared creativity. A ball to chase.

“It allowed that group to come together and share values from the bottom up,” said Hirsch, an assistant professor of environmental policy at ESF and the leader of another SUNY 4E group.

Nomura and his team tried it out. Each researcher could address an aspect of the problem, and Nomura negotiated, brainstormed and sometimes cajoled them to take only what they needed from the $60,000 grant to solve the problem – to act as utility players rather than the big star.

“There was no finger pointing,” said Whitney Lash-Marshall, a post-doctoral fellow at ESF who helped Hirsch and Nomura craft the team-building process. “They really eliminated that with the RFP exercise. The question was how you can connect with part of this group.”

“People wanted the group to succeed,” Nomura said, because they saw the potential on the horizon.

“If there’s a chance of coming up with something that can really have a large impact, and if I can reach a point of trust with the group process, I’m less likely to fight over making sure I get my piece of the pie right now,” Hirsch explained.

Perhaps, they speculate, their approach will gain popularity across the academic world. Instead of a principal investigator or lead author, research projects will come with a list of credits that acknowledge their complexities, specialties and contributions — much like movies come with end credits, Hirsch said. “We need something like that for academia.”

The Green Composites team, now in its second year, is working toward intermediate goals and building momentum, Nomura said. “We’re looking to build capital and critical mass,” and creating an intellectual infrastructure.

He’d like to create a center to support the team’s work – given that his researchers hail from SUNY Polytechnic, University at Albany, Binghamton University, Stony Brook University, and ESF. But he may have to settle for a virtual center.

And that RFP? His team drafted three proposals for the New York State Energy Research and Development Authority. They plan to use ultraviolet light, visible light and advanced polymers to help cure materials rather than huge, custom-made ovens. They’re awaiting a NYSERDA decision.

Hirsch and Lash-Marshall, for their part, are using the techniques they learned from helping the Green Composites team to create similar progress for five other Network of Excellence teams: the Brain Group, the Health Group, the 4E Group and two more that are just now forming.

“We have so much intellectual capital in New York State that isn’t being effectively utilized,” Hirsch said.

Nomura added: “Get those people to chase the ball.”