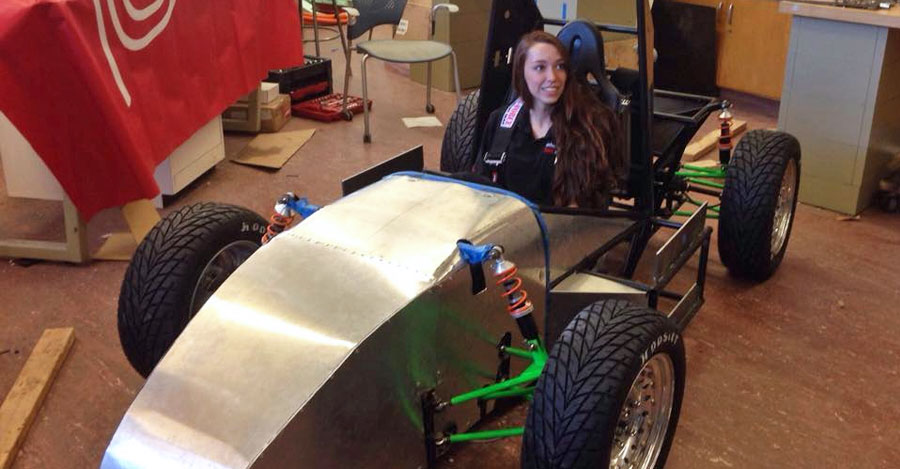 Night dwindled into the wee hours, and then inched toward dawn as a dozen engineers worked with a tangle of colorful wire. Their goal: to bring the “Green Machine” revving to life.
Finally, at 6 a.m. April 27, the electric engine inside the small racecar sprang to life – just hours before the SUNY Bearcats MotorSports Team headed to Loudon, New Hampshire, home of the New Hampshire International Speedway and the Society of Automotive Engineers’ Formula Hybrid competition.

In just eight months, a team of students from SUNY Broome and Binghamton University designed and built an open-wheel, single-seat racecar for the international competition – no small feat. This week, 27 registered teams will compete on the track, proving their cars’ acceleration and endurance, as well as competing in an Autocross competition much like those held by the Southern New York Region of the Sports Car Club of America. Teams hail from universities throughout the United States, as well as India, Turkey, Canada and Australia.

At the wheel will be Michelle DiGiacomo, the project leader – a SUNY Broome graduate and current BU senior who has been an avid Autocross racer for five years. Normally, a team takes about two to three years to prepare their first car, Michelle noted.

“A lot of people said it was crazy to build a car in eight months,” she said. “We did it.”

Going into her senior year of college, she was looking at how she could make a lasting difference. The SAE Hybrid project allows her to do just that – while pursuing her interest in racing.

“A lot of people said it was crazy to build a car in eight months. We did it.”

Students in SUNY Broome Engineering Technologies Professor Gary DiGiacomo’s class helped design the electric motor. Some of them, as well as students in SUNY Broome’s IEEE club, are headed out to New Hampshire on a field trip to watch the race along with the professor, who is Michelle’s father.

The team also received needed support and encouragement from BU Mechanical Engineering Professor Bruce Murray – but still had to come up with at least $25,000 in donations to fabricate the vehicle.

As project lead, Michelle — who received an associate’s degree in Business Administration from SUNY Broome, and is working on her bachelor’s in Leadership and Business Consulting at BU’s School of Management – played a crucial role in coordinating the project’s engineering and business efforts.

In the end, the team raised $25,000 in cash and approximately the equivalent in donated parts and materials. One of their main sponsors is the Peruvian government, thanks to a student who has a relative that works with that country’s trade commission. Even with the contact, that sponsorship took six months to arrange and a good deal of paperwork, Michelle noted.

“They’re a growing economy,” she said of the Peru donation. “We’ve been able to use the team to promote diversity and education. It’s cool being the first college to work with Peru on this.”
Ultimately, that connection may lead to collaboration between engineers in the Binghamton area and those in Lima, she noted.

As of Monday, Michelle hasn’t yet driven the Green Machine but was looking forward to the experience.

“It’s two days before the race. We know everything works,” she said after the team’s all-nighter. “I’m hoping years of experience will help.”

The project’s lessons extend beyond the classroom and the racetrack. Ultimately, Michelle hopes to lead by example – showing girls that they can become project leaders, engineers and racecar drivers. All too often, young people can doubt their abilities and aptitudes, she noted.

“I really want to go into a role where I will be able to motivate people,” she said. “I think about how great it’s been to watch my team grow as people. It’s been a great experience.”