Engineering A Future From Big Dreams to Big Opportunities 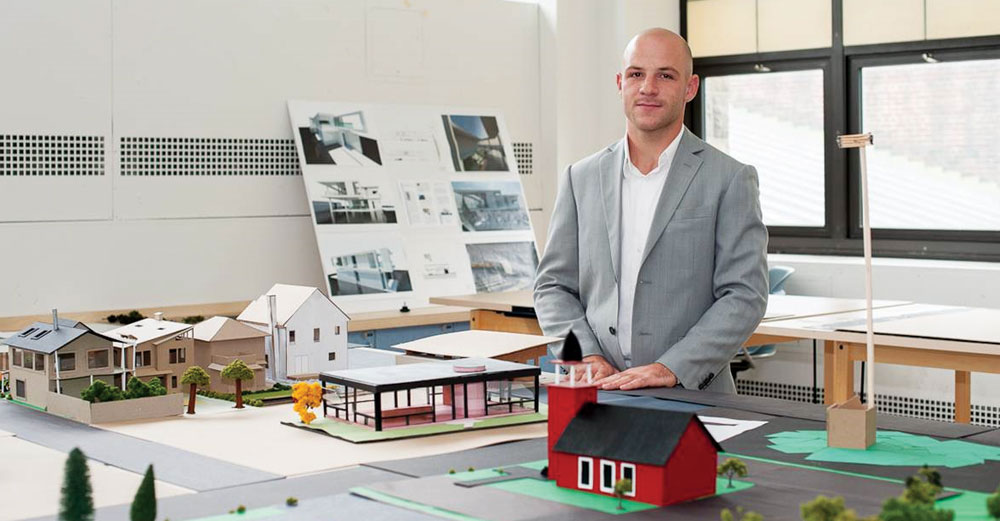 Unlike many college-bound students who don’t know what to do with their lives – both in the classroom and in the working world – Roman Titov ’09 had a leg up over his peers. He had purpose.

“A large portion of students jump into an undergraduate degree ‘undecided,’” says Roman, “so I was happy to have some direction in my studies.”

He certainly did, not only knowing what he wanted to study, but being confident enough to double up on his academic workload. From day one he pursued two BS degrees: Construction Management Engineering and Architectural Technology.

How he arrived at that place is actually a family affair. Roman was born in Belarus and emigrated with his parents to the U.S. when he was four years old. Before enrolling in college, he returned to his homeland to visit family. He bonded with two cousins, both of whom were studying architecture, and his uncle, a practicing architect.

“The trip to Belarus left a lasting impression on me, and influenced my decision to pursue dual degrees,” Roman says. And the two degrees made perfect sense together. “The curricula of both programs had many intersections, and only required the commitment of one additional semester.

“I pursued construction management for its professional practicality, while pursuing architectural design because I had an interest in the subject matter and sought the opportunity to express my creativity through the built environment.”

Roman admits though that he hadn’t quite sorted through the results of where his degrees would lead him professionally.

“I never thoroughly researched nor contemplated the long-term implications of being employed in the construction industry. The plan to study in the field was more instinctive than premeditated.”

Turns out Roman’s instincts were right on. After graduating cum laude from Farmingdale State College – with Latin honors, a major poetry award, membership in Epsilon Pi Tau honor society and a pair of scholarships, no less – he immediately went to work in the profession for which he had been trained, spending 18 months as assistant site supervisor for Trocom Construction Corp., where he had oversight of construction crews, equipment deployment and subcontractor activities. Later, in a letter of reference for Roman, Trocom Vice President Anthony Santoro said: “As a contractor I can honestly say that Mr. Titov was that rare find that comes so infrequently, but that makes a significant impression by his actions.”

From there Roman worked as assistant project manager at three prestigious, plum projects: the Imagination Playground, a children’s park built at the South Street Seaport; a Manhattan waterfront project known as the East River Esplanade; and Bushwick Inlet Park, a $20 million dollar LEED Platinum-certified recreation space and headquarters for the New York City Department of Parks and Recreation. And not to be overlooked were jobs he did with a roofing contractor at New York landmarks such as Yankee Stadium, World Trade Center Towers One and Four, Carnegie Hall, Lincoln Center and Madison Square Garden.

Then in 2012 he struck gold, in the form of a Fulbright Fellowship to the University of Calgary. Though he had grown up and worked in Brooklyn (as well as in Manhattan and Queens), there was a method to the madness of heading to Canada. In fact, it was the project management experience he gained while working in the boroughs that led him north; the University of Calgary, of all the schools he had considered, was the only one that had a project management specialization. He took home an MS in Civil Engineering.

Fast forward to 2014, when Roman enrolled at Rutgers University’s Edward J. Bloustein School of Planning and Public Policy. It was because of his studies in Calgary – specifically a course in Urban Design Theory – that Roman is at Bloustein, considered one of the country’s top urban planning schools. Next year Roman will have completed his second master’s degree, this one in City and Regional Planning.

But Roman is still reveling in his just-completed summer internship in Jamaica. He earned the trip as one of four winners – out of a pool of 50 Bloustein students – in the Louis Berger Fellows program. Louis Berger is a global corporation that helps clients with infrastructure and development projects; this one a 42-mile highway project connecting Jamaica’s capital city, Kingston, and its popular tourist hub, Ocho Rios. In an already-blossoming career, Roman says the project open new vistas.

“It was great to experience this signature project, which was at a scale that I had never been exposed to before.”

Roman testifies to the fact that Farmingdale inspired him to do everything on a grand scale. He recalls: “When I was attending Farmingdale the motto was ‘Dream Big.’ I have found inspiration in those two words throughout my life, and I continue to do so.”