Research Shows Us How Laser Lights Can Improve Forensic Science 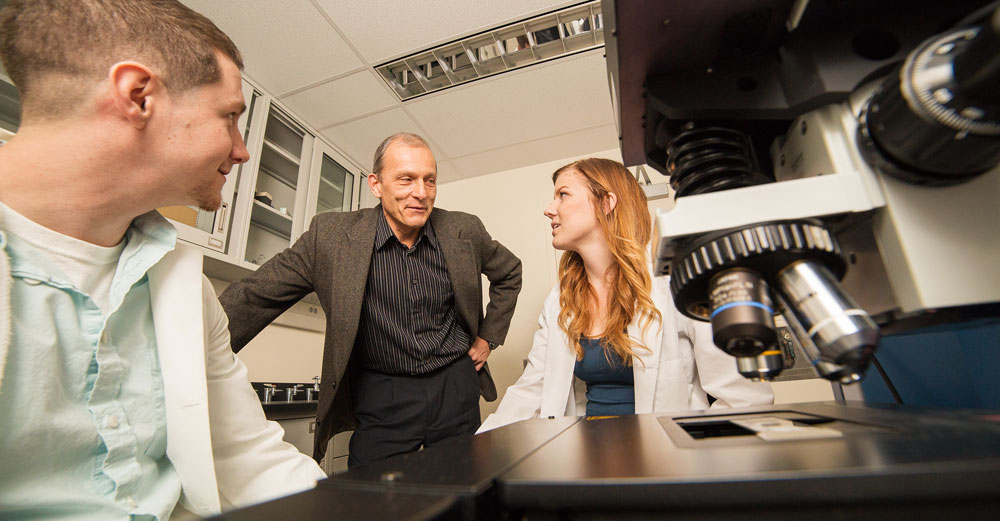 Contrary to TV shows like CSI, most crime scenes are not investigated by a well-trained team of professionals armed with the latest technology. In fact, the state of forensic science was so appalling in 2009 that the Senate convened a panel of judges, law enforcement officers, lawyers, and scientists to investigate the way officials collected and analyzed crime-scene evidence.

The panel’s seminal report, “Strengthening Forensic Science in the United States: A Path Forward,” concluded that “Faulty forensic science analyses may have contributed to wrongful convictions of innocent people,” due largely to evidence derived from imperfect testing and overreliance on the opinions of experts. They recommended that forensic science take advantage of advancements in scientific methodology, and analytical chemistry in particular.

Such advancements are epitomized in the work of Dr. Igor Lednev, professor of chemistry and director of the Lednev Research Laboratory in analytical chemistry at the University at Albany. In 2013, Lednev patented a novel methodology that allows investigators to immediately confirm the source of biological stains found at crime scenes—one of the most important types of evidence tested by forensic investigators, according to the National Institute of Justice.

Lednev’s methodology utilizes Raman spectroscopy to identify the stains. “At the moment, law enforcement agencies use biochemical tests to identify biological samples. This is destructive to the sample, and there’s not a single test that can be applied for all types of body fluids,” Lednev explained. “Our approach is the first one that can be used for all body fluids in a nondestructive and confirmatory way.”

Raman spectroscopy works on the principle of vibrational signature. Every material—including body fluids, which can occur in a stain, liquid, or dry state—has specific vibrational characteristics. When light penetrates that material, most photons remain unaffected by the medium’s vibrations. One photon per million, however, will change its color or energy signature due to the specific excitation of molecular vibrations in the sample.

Lighting the way to discovery

According to Lednev’s methodology, the investigator shines a laser light on the sample, collects the scattered light, then analyzes how much the energy of photons in this scattered light has changed. This will give the vibrational signature of the material in the sample – its ID, if you will.

Until recently, Lednev has done his work on high-resolution desktop instruments, which are versatile and highly sensitive but too big to be used in the field. In 2015, he began working with BioTools, Inc., a Florida-based company that creates instruments pharmaceutical, regulatory, academic and security industries, that intends to adapt Lednev’s technology for use in its portable Raman device.

The project presented a specific challenge: an instrument small enough to be brought to a crime scene doesn’t show the high sensitivity of spectral selectivity that larger instruments do. With a $50,000 investment from SUNY’s Technology Accelerator Fund, Lednev is researching whether the BioTools portable Raman microscope can provide the specificity needed for utilizing his methodology in the field.

If it can, Lednev will develop a spectroscopic library for this device that will allow a law enforcement agent to identify body fluid traces at a crime scene. This will help determine which specific biological evidence needs to be collected at the site, saving both time and money. BioTools has indicated an interest in commercializing Lednev’s patented technology.

“I believe that this method has great potential to significantly improve crime scene investigations,” said BioTools President Rina K. Dukor, Ph.D. “We are pleased to partner with Dr. Lednev to expand the ability of law enforcement agencies to use his forensic technology.”

BioTools is not the only institution interested in Lednev’s work. Over the past ten years, he’s received $1.8 million in support from the US Department of Justice. He was also invited to help develop the government’s long-term forensic science program as a member of a working group within the White House Subcommittee on Forensic Science. And, most recently, the U.S. Army Criminal Investigation Command’s Defense Forensic Science Center (DFSC) in Atlanta, GA, reached out to him about implementing his methodology into their routine investigations of crime scenes and developing a spectroscopic library for body fluid traces.

With a yearlong partnership agreement through the Army’s outreach educational program, UAlbany doctoral student Marisia Frikiet will help the DCFS implement Lednev’s methodology. “We are very excited that a real law enforcement agency will evaluate and practice our methodology,” says Lednev. “If everything goes according to plan, they will recommend that all army crime units use it. If that happens, police crime laboratories around the country will also be interested.”

In the meantime, Lednev is working on patents for two more applications of his methodology. The first will allow investigators to pinpoint when the stain was created—in other words, the exact moment of the crime. Additionally, he has developed a spectroscopic marker, based on the total biochemical composition of the bloodstain, that can determine key phenotype characteristics. This will allow investigators to immediately build a profile at the crime scene and help eliminate wrongful accusations.

At the moment, this research is at the level of peer review and papers in high-level journals, but Lednev believes that his work with BioTools and the Army Criminal Investigation Command may help move it to practical applications.