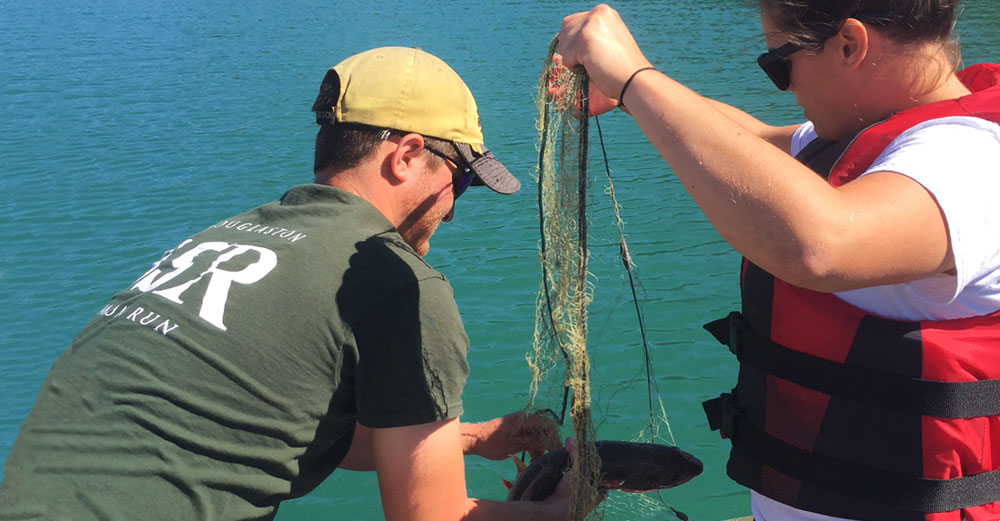 As a sophomore studying Environmental Science at SUNY Oneonta, Colleen Parker never imagined that in five years she would be single handedly spearheading a mercury monitoring project encompassing 13 Catskills lakes.

It all started when she approached her professor, Dr. Devin Castendyk, about doing an independent study to measure mercury content in the water of three nearby lakes and in the Unadilla and Susquehanna rivers. As a senior, under the guidance of Oneonta faculty researcher Dr. Kiyoko Yokota and funded with her third Research Foundation grant, Parker concluded her undergraduate career studying mercury levels in fish from Goodyear Lake. 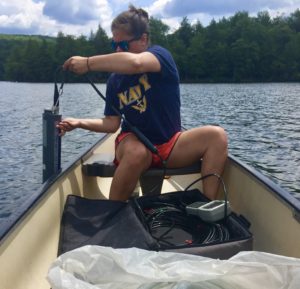 Graduate school hadn’t been on Parker’s radar when Dr. Yokota contacted her in February 2015 about coming back to Oneonta as a Master’s student to examine mercury levels in smallmouth and largemouth bass, walleye and yellow perch across 13 targeted lakes in the Catskills. These species of fish have previously tested for high mercury levels and are of particular interest to the fisherman and anglers who enjoy fishing and New York’s many rivers, streams, lakes and ponds.

Parker, with a little help from the NYS Department of Environmental Conservation (DEC) and sometimes a fellow student, a friend or even a family member, collected ten of each species from the 13 lakes and sampled at each lake twice. It was an ambitious undertaking. Each trip required an hour long drive to the Cooperstown field station to pick up the boat, followed by a one to three hour drive to each lake.

Although Parker had some previous exposure to collecting specimens during her senior year, this project is much larger in scope. She had a steep learning curve in order to navigate the boat, locate the fish, and determine which net is best suited for catching each species.

Parker first tried studying YouTube videos, but ultimately mastered the skills by going out in the field with DEC employees. Local fisherman also supported her efforts, often giving her their catches to sample. Parker measures each specimen for length and weight and takes a seven millimeter tissue sample to be sent to Syracuse University for analysis. 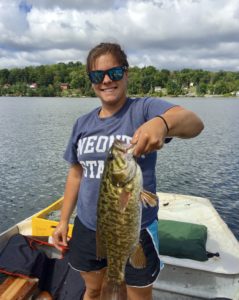 Her research is part of a larger study being done in conjunction with Syracuse University Professor Dr. Charles Driscoll, Jr., who is studying mercury in fish from lakes all over New York State. The project is a follow up to a 2008 report released by the New York State Energy and Research Development Authority (NYSERDA) that found mercury concentrations in fish collected from certain lakes in the Adirondacks and Catskills exceeded the United States Environmental Protection Agency water quality criterion for fish and sometimes the United States Food and Drug Administration marketplace standard for commercial fish.

“This statewide study is important,” said Dr. Yokota. Born in Japan, she has seen first-hand how mercury poisoning can devastate a community. In the mid 1900’s the Chisso fertilizer company released high levels of mercury into Japan’s Minamata Bay, resulting in over 2,000 deaths and countless cases of neurological damage. “While the levels of mercury here are not as much of a concern (in terms of acute toxicity), I have seen how bad the effects of mercury poisoning can be,” said Dr. Yokota.

Having completed her fieldwork, Parker is now working on her analysis, which will be part of a statewide report to be released in 2018. Ongoing monitoring of mercury levels is likely to continue in the Adirondacks and Catskills, as well as in other susceptible areas across the country. “Many people rely on fishing from their local lakes as a primary source of food, so to see fish numbers declining or too contaminated to eat is really scary,” Parker noted. “I would like to see continued transparency, people that use these waters need to know what’s in it.”